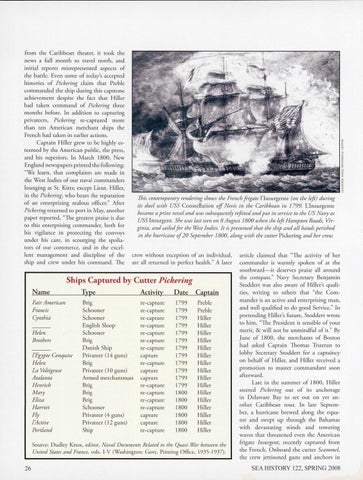 from rhe Cari bbean rhearer, ir rook rhe news a full monrh ro rravel norrh, and inirial reporrs misrepresented aspecrs of rhe barrle. Even som e of roday's accepted hisrories of Pickering claim rhar Preble commanded rhe ship during rhis capstone achievemenr despite rhe facr rhar Hiller had raken command of Pickering rhree months before. In addition ro capruring privareers, Pickering re-caprured more dun ren American merchant ships rhe French had raken in earlier acrions. Caprain Hiller grew ro be highly esteemed by the American public, the press, and his superiors. In March 1800, New England newspapers printed the following: "We learn, that complaints are made in rhe West Indies of our naval commanders lounging at St. Kitts; except Lieut. Hiller, in the Pickering, who bears rhe reputation of an enterprizing zealous officer." After Pickering returned ro port in May, another paper reporred, "The greatest praise is due ro this enterprising commander, both for his vigilance in protecting rhe convoys under his care, in scourging rhe spoliators of our commerce, and in the excellent management and discipline of the ship and crew under his command. The

This contemporary rendering shows the French frigate l'Insurgente (on the left) during its duel with USS Constellarion off Nevis in the Caribbean in 1799. Llnsurgente became a prize vessel and was subsequently refitted and put in service to the US Navy as USS Insurgent. She was last seen on 8 August 1800 when she left Hampton Roads, Virginia, and sailed for the West Indies. It is presumed that the ship and all hands perished in the hurricane of20 September 1800, along with the cutter Pickering and her crew.

crew wi rhout exception of an individual , are all returned in perfect health ." A later

arricle claimed th at "The acriviry of her commander is warmly spoken of at the sourhward- ir deserves praise all around rhe compass." Navy Secretary Benjamin Srodderr was also aware of Hiller's qualiries, wriring ro orhers thar "the Commander is an acrive and enterprising m an , and well qualified ro do good Service." In porrending Hiller's furure, Srodderr wrote ro him, "The President is sensible of yo ur merit, & will not be unmindful of it." By June of 1800, the m erchants of Bosron had asked Captain Thomas Truxtun ro lobby Secrerary Srodderr for a captaincy on behalf of Hiller, and Hiller received a promorion ro master commandant soon afterward. Late in the summer of 1800, Hiller steered Pickering out of its an chorage in Delaware Bay to set out on ye t another Caribbean rour. In late September, a hurricane brewed along the equator and swept up rhrough the Bahamas with devastating winds and rowering waves that threatened even the American fri gate Insurgent, recently captured from the French. Onboard the cutter Scammel, the crew jettisoned guns and anchors in