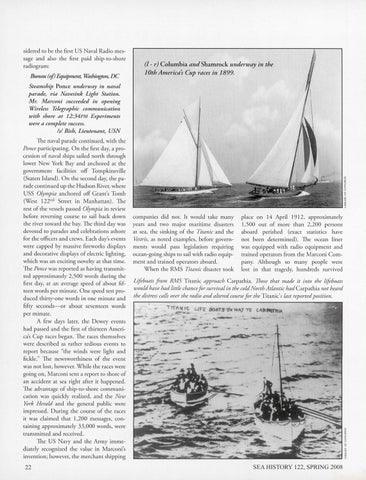 sidered to be the first US Naval Radio message and also the first paid ship-to-shore radiogram:

Steamship Ponce underway in naval parade, via Navesink Light Station. Mr. Marconi succeeded in opening Wireless Telegraphic communication with shore at 12:34PM Experiments were a complete success. Isl Bish, Lieutenant, USN The naval parade continued, with the Ponce participating. On the first day, a procession of naval ships sailed north through lower New York Bay and anchored at the government faci lities off Tompkinsville (Staten Island). On the second day, the parade continued up the Hudson River, where USS Olympia anchored off Grant's Tomb (West 122 11d Street in M anhattan). The rest of the vessels passed Olympia in review before reversing course to sail back down the river toward the bay. The third day was devoted to parades and celebrations ashore for the officers and crews. Each day's events were capped by m assive fireworks displays and decorative displays of electric lighting, which was an exciting novelty at that time. The Ponce was reported as having transmitted approximately 2,500 words during the first day, at an average speed of abour fifteen words per minute. One speed test produced thirty-one words in one minute and fifty seconds-or about seventeen words per minute. A few days later, the Dewey events had passed and the first of thirteen America's Cup races began. The races themselves were described as rather tedious events to report because "the winds were light and fickle ." The newsworthiness of the event was not lost, however. While the races were going on, Marconi sent a report to shore of an accident at sea right after it happened. The advantage of ship-to-shore communication was quickly realized, and the New York Herald and the general public were impressed. During the course of the races it was claimed that 1,200 messages, containing approximately 33,000 words, were transmitted and received. The US Navy and the Army immediately recognized the value in Marconi's invention; however, the m erchant shipping

companies did not. It wo uld take many years and two major maritime disasters at sea, the sinking of the Titanic and the Vestris, as noted examples, before governm ents wo uld pass legislation requiring ocean-going ships to sail with radio equipment and trained operators aboard. When the RMS Titanic disaster took

place on 14 April 19 12, approximately 1,5 00 our of more than 2,200 persons aboard perished (exact statistics have not been determined). The ocean liner was equipped with radio equipment and trained operators from the Marconi Com pany. Although so m any peo ple were lost in that tragedy, hundreds survived

Lifeboats from RMS Titanic approach Carpathia. Those that made it into the lifeboats would have had Little chance for survival in the cold North Atlantic had Carpathia not heard the distress calls over the radio and altered course for the Titanic's last reported position.