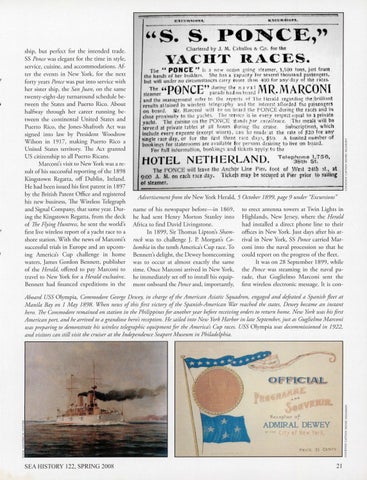 &#39;&#39;S. S. PONCE,&#39;&#39; ship, but perfect for the intended trade. SS Ponce was elegant for the time in style, service, cuisine, and acco mmodations. After the events in New York, for the next forty years Ponce was put into service wirh her sister ship, the San Juan, on the same twenty-eight-day turnaro und schedule between the States and Puerto Rico. About halfWay through her career running between the continental United States and Puerto Rico, the Jones-Shafroth Act was signed into law by President Woodrow Wilson in 191 7, making Puerto Rico a United Scates territory. The Act granted US citizenship to all Puerto Ricans. Marconi&#39;s visit to New York was a result of his successful reporting of the 1898 Kingstown Regatta, off Dublin, Ireland. He had been iss ued his firs t patent in 1897 by the British Parent Office and registered his new business, The Wireless Telegraph and Signal Company, that same year. During the Kingstown Regatta, from the deck of The Flying Huntress, he sent the wo rld&#39;s first live wireless report of a yacht race to a shore station. With the news of Marconi&#39;s successful trials in Europe and an upcoming America&#39;s Cup challenge in home waters, James Gordon Bennett, publisher of the Herald, offered to pay M arconi to travel to New York for a Herald exclusive. Bennett had financed expeditions in the

name of his newspaper before-in 1869, h e had sent H enry Morton Stanley into Africa to find D avid Livingstone. In 1899, Sir Thomas Lipton&#39;s Shamrock was to challenge J. P. Morgan&#39;s Columbia in the tenth Ameri ca&#39;s C up race. To Bennett&#39;s delight, the D ewey homecoming was to occur at almost exactly rhe same time. Once Marconi arrived in New York, he immediately set off to install his equipment onboard the Ponce and, importantly,

to erect antenna towers at Twin Ligh ts in Highlands, New Jersey, where the H erald had installed a direct phone line to their offices in New York. Just days after his arrival in New York, SS Ponce carried Marconi into the naval procession so that he could report on the progress of the Heer. It was on 28 September 1899, while the Ponce was steaming in the naval parade, that Guglielmo Marconi sent the fi rst wireless electronic message. It is con-

Aboard USS Olympia, Commodore George Dewey, in charge of the American Asiatic Squadron, engaged and defeated a Spanish fleet at Ma nila Bay on 1 M ay 1898. When news of this first victory of the Spanish-American Ular reached the states, Dewey became an instant hero. The Commodore remained on station in the Philippines for another year before receiving orders to return home. New York was his first American port, and he arrived to a grandiose hero&#39;s reception. He sailed into New York Harbor in late September, just as Guglielmo M arconi was preparing to demonstrate his wireless telegraphic equipment for the America&#39;s Cup races. USS Olympia was decommissioned in 1922, and visitors can still visit the cruiser at the Independence Seaport Museum in Philadelphia.