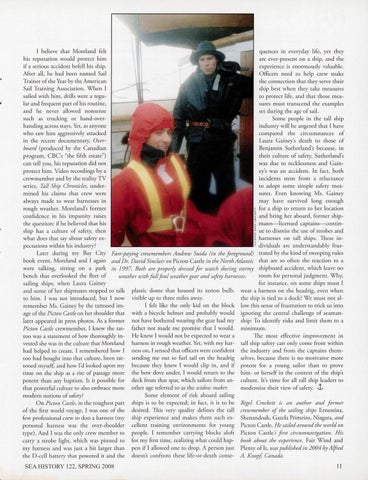 I believe that Moreland felt quences in everyday life, yet they his reputation wo uld protect him are ever-present on a ship, and the if a serious accident befell his ship. experience is enormously valuable. After all, he had been named Sail Officers need to help crew make Trainer of the Year by the American the connection that they serve their Sail Training Association. When I ship best when they take m easures sailed with him, drills were a reguto protect life, and that those mealar and frequent part of his routine, sures must transcend the examples and he never allowed nonsense set during the age of sail. such as trucking or hand-overSome people in the tall ship handing across stays. Yet, as anyo ne industry will be angered that I have wh o saw him aggressively attacked compared the circumstances of Laura Gainey's death to those of in the recent documentary, Overboard (produced by the Canadian Benjamin Sutherland's because, in program , C BC's "the fifth estate") their culture of safety, Sutherland's was due to recklessness and Gaincan tell you, his reputation did not ey's was an accident. In fact, both protect him . Video recordings by a incidents stem from a reluctance crewmember and by the reali ty TV series, Tall Ship Chronicles, underto adopt some simple safety meamined his claims that crew were sures. Even knowing Ms. Gainey may have survived long enough always m ade to wear harnesses in rough weather. Moreland's former for a ship to return to her location and bring her aboard, former shipconfidence in his impunity raises mates-licensed captains-continthe question: if he believed that his ship has a culture of safety, then ue ro dismiss the use of strobes and harnesses o n tall ships. These inwhat do es that say about safety exdividuals are understandably fruspectations within his industry? Later during my Bay City Fare-paying crewmembers Andrew Suida (in the foreground) trated by the kind of sweeping rules book event, Moreland and I again and Dr. David Sinclair on Picton Castle in the North Atlantic that are so often the reaction to a were talking, sitting on a park in 1997. Both are properly dressed for watch during stormy shipboard accident, which leave no room for personal judgm ent. Why, bench that overlooked the Beet of weather with full foul weather gear and safety harnesses. for instance, on som e ships must I sailing ships, when Laura Gainey and some of her shipmates stopped to talk plas tic dome that housed its xeno n bulb, wear a harness on the headrig, even when the ship is tied to a dock? We must not alto him. I was not introduced, but I now visible up to three miles away. I felt like the only kid on the block low this sense of frustration to tri ck us into remember Ms. Gainey by the tattooed image of the Picton Castle on her shoulder that with a bicycle helmet and probably would ignoring the central challenge of seamanlater appeared in press photos. As a form er not have bothered wearing the gear had my ship : To identify risks and limit them to a Picton Castle crewmember, I knew the tat- father not made me promise that I would. mm1mum. The most effective improvem ent in too was a statement of how thoroughly in- H e knew I wo uld not be expected to wear a vested she was in the culture that Moreland harness in rough weather. Yet, with my har- tall ship safety can only come from within had helped to create. I remembered how I ness on, I sensed that officers were confident the industry and fro m the captains themtoo had bought into that culture, been tat- sending m e out to furl sail on the headrig selves, because there is no motivato r more tooed myself, and how I'd looked upon my because they knew I would clip in, and if potent for a yo ung sailor than to prove time on the ship as a rite of passage more the bow dove under, I wo uld return to the him- or herself in the context of the ship's potent than any baptism. Is it possible for deck from that spar, which sailors from an- culture. It's time for all tall ship leaders to modernize their view of safety. J, that powerful culture to also embrace more other age referred to as the widow maker. Some element of risk aboard sailing modern no tions of safety? On Picton Castle, in the roughest part ships is to be expected; in fact, it is to be Rigel Crockett is an author and former of the first wo rld voyage, I was one of the desired . This very quali ty defines the tall crewmember of the sailing ships Ernestina, few professional crew ro don a harness (my ship experience and makes them such ex- Shenandoah, Gazela Primeiro, N iagara, and personal harness was the over-shoulder cellent training environments for young Picton Castle. He sailed around the world on type). And I was the only crew member to people. I remember carrying blocks aloft Picton Castle s first circumnavigation. H is carry a strobe light, which was pinned to for my first time, realizing what could hap- book about the experience, Fair Wind and m y harness and was just a bit larger than pen if I allowed one to drop. A person just Plenty oflt, was published in 2 004 by Alfred the D-cell battery that powered it and the doesn't confront these life-or-death conse- A. Knopf, Canada.