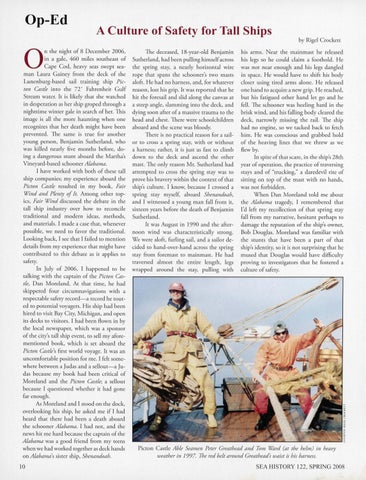 n the night of 8 D ecember 2006, in a gale, 460 miles southeast of Cape C od, heavy seas swept seaman Laura Gainey from the deck of the Lunenburg-based sail training ship Picton Castle into the 72 Â° Fahrenheit Gulf Stream water. It is likely that she watched in desperation as her ship groped through a nighttime winter gale in search of her. This image is all the more haunting when one recognizes that her death might have been prevented. The same is true for another yo ung person, Benj amin Sutherland, who was killed nearly five months before, doing a dangerous stunt aboard the M artha&#39;s Vineyard-based schooner Alabama. I have worked with both of these tall ship companies; my experience aboard the Picton Castle resulted in my book, Fair Wind and Plenty of It. Among other to pics, Fair Wind discussed the debate in the tall ship industry over how to reconcile traditional and modern ideas, methods, and materials. I m ade a case that, whenever possible, we need to favor the traditional. Looking back, I see that I failed to m entio n details from my experience that might have contributed to this debate as it applies to safety. In July of 2006, I happened to be talking with the captain of the Picton Castle, D an M oreland. At that time, he had skippered four circumnavigations with a respectable safety record-a reco rd he touted to potential voyagers. His ship had been hired to visit Bay C ity, Michigan , and open its decks to visitors. I had been fl own in by the local newspaper, which was a spo nsor of the city&#39;s tall ship event, to sell my aforem entioned book, which is set aboard the Picton Castle&#39;s first world voyage. It was an uncomfortable position for me. I felt somewhere between a Judas and a sellout- a Judas because my book had been critical of M oreland and the Picton Castle; a sellout because I questioned whether it had gone far enough . As Moreland and I stood on the dock, overlooking his ship, he asked me if I had heard that there had been a death aboard the schooner Alabama. I had no t, and the news hit me hard because the captain of the Alabama was a good friend from my teens when we had worked together as deck hands on Alabama&#39;s sister ship, Shenandoah.

The deceased, 18-year-old Benjam in Sutherland, had been pulling himself across the spring stay, a nearly horizontal wire rope that spans the schooner&#39;s two m asts aloft. H e had no harness, and, for whatever reason, lost his grip. It was reported that he hit the foresail and slid along the canvas at a steep angle, slamming into the deck, and dying soon after of a m assive trauma to the head and chest. There were schoolchildren aboard and the scene was bloody. There is no practical reason for a sailor to cross a spring stay, with or wi thout a harness; rather, it is j ust&#39;as fast to climb down to the deck and ascend the other m as t. The only reason M r. Sutherland had attempted to cross the spring stay was to prove his bravery within the context of that ship&#39;s culture. I know, because I crossed a spring stay myself, aboard Shenandoah, and I witnessed a yo ung m an fall from it, sixteen years before the death of Benjamin Sutherland. It was August in 1990 and the afternoon wind was characteristically strong. We were aloft, furling sail, and a sailo r decided to hand-over-hand across the spring stay from fo remas t to m ainmast. H e had traversed almost the entire length, legs wrapped around the stay, pulling with

his arms. Near the mainmast he released his legs so he could claim a fo othold. H e was not near enough and his legs dangled in space. He would have to shift his body closer using tired arms alone. H e released one hand to acquire a new grip. H e reached, but his fatigued other hand let go and he fell. The schooner was heeling hard in the brisk wind, and his falling body cleared the deck, narrowly missing the rail. The ship had no engine, so we tacked back to fetch him. He was conscious and grabbed hold of the heaving lines that we threw as we flew by. In spite of that scare, in the ship&#39;s 28th year of operation, the practice of traversing stays and of &quot;trucking,&quot; a daredevil rite of sitting on top of the mast with no hands, was not forbidden. When Dan Moreland told me about the A labama tragedy, I remembered that I&#39;d left my recollection of that spring stay fall from my narrative, hesitant perhaps to damage the reputation of the ship&#39;s owner, Bob Douglas. Moreland was familiar with the stunts that have been a part of that ship&#39;s identity, so it is not surprising that he mused that D o uglas would have difficul ty proving to investigators that he fostered a culture of safety.