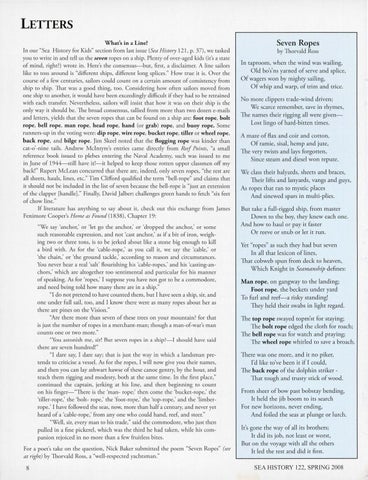 LETTERS What's in a Line? In our "Sea History for Kids" section from last issue (Sea History 121 , p. 37), we tasked you to write in and tell us the seven ropes on a ship. Plenry of over-aged kids (ir's a state of mind, right?) wrote in. H ere's th e consensus-bur, first, a disclaimer. A line sailors like to toss aro und is "different ships, different long splices." How true it is. Over the course of a few centuries, sailors could count on a certain amount of consistency from ship to ship. Thar was a good thing, too. Considering how often sailors moved from one ship to another, it would have been exceedingly difficult if they had to be retrained with each transfer. Nevertheless, sailors will insist that how it was on their ship is the only way it should be. The broad consensus, rallied from more than two dozen e-mails and letters, yields that the seven ropes that can be fo und on a ship are: foot rope, bolt rope, bell rope, man rope, head rope, hand (or grab) rope, and buoy rope. Some runners-up in the voting were: dip rope, wire rope, bucket rope, tiller or wheel rope, back rope, and bilge rope. Jim Skeel noted that rhe Hogging rope was kinder than car-o' -n ine tails. Andrew Mdnryre's entries came directly from Reef Points, "a small reference book issued to plebes entering the Naval Academy, such was issued to me in June of 1944-srill have ir!-ir helped to keep those rotten upperclassmen off my back! " Rupert McLean concurred that there are, indeed, only seven ropes, "rhe rest are all sheets, hauls, lines, etc." Tim Clifford qualified the term "bell-rope" and claims that it should nor be included in the list of seven because the bell-rope is "j ust an extension of the clapper [handle]." Finally, David Jalbert challenges green hands to fetch "six feet of chow line." If literature has anything to say about it, check our this exchange from James Fenimore Cooper's Home as Found (1838), Chapter 19: "We say 'anchor,' or 'let go the anchor,' or 'dropped the anchor,' or some such reasonable expression, and not 'cast anchor,' as if a bit of iron, weighing two or three tons, is to be jerked about like a stone big enough to kill a bird with. As for the 'cable-rope,' as yo u call it, we say the 'cable,' or 'the chain,' or 'the ground tackle,' acco rding to reason and circumstances. You never hear a real 'salt' flourishing his 'cable-ropes,' and his 'casting-anchors,' which are altogether too sentimental and particular for his manner of speaking. As for 'ropes,' I suppose yo u have not got to be a commodore, and need being told how many there are in a ship." "I do not pretend to have counted them, bur I have seen a ship, sir, and one under full sail, too, and I know there were as many ropes about her as there are pines on the Vision." "Are there more than seven of these trees on yo ur mountain? for that is just the number of ropes in a merchant-man; though a man-of-war's man counts one or two more." "You as tonish me, sir! But seven ropes in a ship?-I should have said there are seven hundred! " "I dare say, I dare say; that is just the way in which a landsman pretends to criticise a vessel. As for th e ropes, I will now give you their names, and then yo u can lay athwart hawse of these canoe gentry, by the hour, and reach them rigging and modesry, both at the same rime. In the first place," conti nued the captain, jerking at his line, and then beginning to count on his finger-"There is the 'man- rope; ' then come the 'bucket-rope,' the 'tiller-rope,' the 'bolt- rope,' the 'foot-rope,' the 'top-rope,' and the 'limberrope.' I have followed the seas, now, more than half a century, and never yet heard of a 'cable-rope,' from any one who could hand, reef, and steer." "Well, sir, every man to his trade," said the commodore, who just then pulled in a fine pickerel, which was the third he had taken, while his companion rejoiced in no more than a few fruitless bites. For a pods take on the question, Nick Baker submitted the poem "Seven Ropes" {see at right) by Thorvald Ross, a "well -respected yachtsman."

In taproom, when the wind was wailing, Old bo's'ns yarned of serve and splice, Of wagers won by mighry sailing, Of whip and warp, of trim and trice. No more clippers trade-wind driven; We scarce remember, save in rhymes, The names their rigging all were givenLost lingo of hard-bitten times. A maze of flax and coir and cotton, Of ramie, sisal, hemp and jute, The very twists and lays forgotten, Since steam and diesel won repute. We class their halyards, sheets and braces, Their lifts and lanyard s, vangs and guys, As ropes that ran to mystic places And sinewed spars in multi-plies. But take a full-rigged ship, from m aster Down to the boy, they knew each one. And how to haul or pay it faster Or reeve or snub or let it run. Yet "ropes" as such they had but seven In all that lexicon of lines, That cobweb spun from deck to heaven, Which Knight in Seamanship defines:

Man rope, on gangway to the landing; Foot rope, the beckets under ya rd To furl and reef-a risky standing! They held their swabs in light regard. The top rope swayed topm'st for staying; The bolt rope edged the cloth for roach; The bell rope was for watch and praying; The wheel rope whirled to save a broach. There was one more, and it no piker, I'd like to've been it if I could, The back rope of the dolphin striker That rough and trusty stick of wood. From sheer of bow past bobstay bending, It held the jib boom to its search For new horizons, never ending, And foiled the seas at plunge or lurch. It's gone the way of all its brothers; It did its job, not least or wo rst, But on the voyage with all the others It led the rest and did it first. SEA HISTORY 122, SPRING 2008