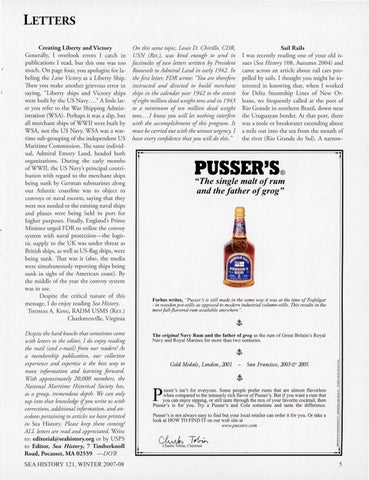 LETTERS Creating Liberty and Victory General ly, I overlook errors I carch in publicarions I read, bur rhis one was too much. On page four, yo u apologize for labeling rhe Lane Victory as a Liberry Ship. Then yo u make anorher grievous erro r in saying, "Liberry ships and Victory ships were builr by rhe US Navy . .. ." A linle larer yo u refer to rhe War Shipping Adminisrrarion (WSA). Perhaps ir was a slip, bur all mercham ships of W\VII were builr by WSA, nor rh e US Navy. WSA was a warrime sub-grouping of rhe independem US Maririme Commission. The same individual, Admiral Emory Land, headed borh organizarions. During the early momhs of WWII, the US Navy's principal contribution with regard to the mercham ships being sunk by German submarines along our Atlantic coastline was to object to convoys or naval escorts, saying that they were not needed or the existing naval ships and planes were being held in port for higher purposes . Finally, England's Prime Minisrer urged FDR to urilize rhe convoy sysrem wirh naval prorecrion- rhe logistic supply to rhe UK was under threar as Brirish ships, as well as US-Aag ships, were being sunk. Thar was ir (also, rhe media were simultaneously reporring ships being sunk in sight of rhe American coast). By rhe middle of rhe year rhe co nvoy system was in use. D espire the crirical narure of rhis message, I do enjoy reading Sea History. T HOMAS A. Kr NG, RADM USMS (R.ET.) Charlo rresville, Virginia Despite the hard knocks that sometimes come with letters to the editor, I do enjoy reading the mail (and e-mail) from our readers! As a membership publication, our collective experience and expertise is the best way to move information and learning forward. With app roximately 20, 000 members, the National Maritime Historical Society has, as a group, tremendous depth. We can only tap into that knowledge ifyou write us with corrections, additional information, and anecdotes p ertaining to articles we have p rinted in Sea History. Please keep them coming! ALL letters are read and appreciated. Wrire to : editorial@seahistory.org or by USPS to Editor, Sea History, 7 Timberknoll Road, Pocasset, MA 02559. -DO'R

On this same topic, Louis D. Chirillo, CDR, USN (Ret.}, was kind enough to send in facsimiles of two letters written by President Roosevelt to Admiral Land in early 1942. In the first letter, FDR wrote: "You are therefore instructed and directed to build merchant ships in the calendar year 1942 to the extent ofeight million dead weight tons and in 1943 to a minimum of ten million dead weight tons.. .. I know you will let nothing interfere with the accomplishment of this program. It must be carried out with the utmost urgency. I have every confidence that you will do this. "

I was recently reading one of yo ur old issues (Sea H istory 108, Autumn 2004) and came across an article abour rail cars propelled by sails. I thought yo u mighr be inreresred in knowing thar, when I worked for Delra Sreamship Lines of New Orleans, we frequently called at the porr of Rio Grande in sourhern Brazil , down near the Uruguayan border. Ar that porr, rhere was a mole or breakwater extending about a mile our into rhe sea from rhe mouth of rhe river (Rio Grande do Sul). A narrow-

PUSSER'SÂŽ "The single malt of rum and the father ofgrog"

Forbes writes, "Pusser s is still made in the same way ii was at the time of Trafalgar - in wooden pot-stills as opposed to modern industrial column-stills. This results in the most full-flavored rum available anywhere".

The original Navy Rum and the father of grog as the rum of Great Britain 's Royal Navy and Royal Marines for more than two centuries.

usser 's isn't for everyone. Some people prefer rums that are almost flavorless when compared to the intensely rich flavor of Pusser's. But if you want a rum that you can enjoy sipping, or still taste through the mix of your favorite cocktai l, then Pusser 's is for you. Try a Pusser 's and Cola sometime and taste the difference.

Pusser's is not always easy to find but your local retailer can order it for you. Or take a look at HOW TO FIND IT on our web site at www.pussers.com