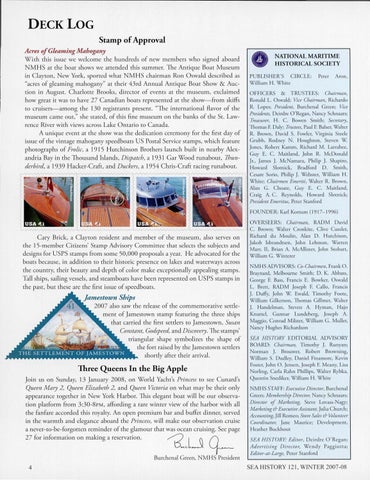 DECK LOG Stamp of Approval Acres of Gleaming Mahogany With this issue we welcome the hundreds of new members who signed aboard NMHS at the boat shows we attended this summer. The Antique Boat Museum in Clayton, New York, sported what NMHS chairman Ron Oswald described as "acres of gleaming mahogany" at their 43rd Annual Antique Boat Show & Auction in August. Charlotte Brooks, direcror of events at the museum, exclaimed how great it was to have 27 Canadian boats represented at the show-from skiffs to cruisers- among the 130 registrants present. "The international flavor of the museum came out," she stated, of this fine museum on the banks of the St. Lawrence River with views across Lake Ontario to Canada. A unique event at the show was the dedication ceremony for the first day of issue of the vintage mahogany speedboats US Postal Service stamps, which feature photographs of Frolic, a 1915 Hutchinson Brothers lau nch built in nearby Alexandria Bay in the Thousand Islands , Dispatch, a 1931 Gar Wood runabout, Thunderbird, a 1939 Hacker-Craft, and Duckers, a 1954 Chris-Craft racing runabout.

Cary Brick, a C layton resident and member of the museum, also serves on the 15-member Citizens' Stamp Advisory Committee that selects the subjects and des igns for USPS stamps from some 50,000 proposals a year. He advocated for the boats because, in addition to their historic presence on lakes and waterways across the country, their beauty and depth of color make exceptionally appealing stamps. Tall ships, sailing vessels, and steamboats have been represented on USPS stamps in the past, but these are the first issue of speedboats.

Jamestown Ships 2007 also saw the release of the commemorative settlement of Jamestown stamp featuring the three ships that carried the first settlers to Jamestown, Susan Constant, Godspeed, and Discovery. The stamps' triangular shape symbolizes the shape of the fort raised by the Jamestown settlers shortly after their arrival.

Three Queens In the Big Apple Join us on Sunday, 13 January 2008, on World Yacht's Princess to see Cunard's Queen Mary 2, Queen Elizabeth 2, and Queen Victoria on what may be their only appearance together in New York Harbor. This elegant boat will be our observation platform from 3:30-8PM, affording a rare winter view of the harbor with all the fanfare accorded this royalty. An open premium bar and buffet dinner, served in the warmth and elegance aboard the Princess, will make our observation cruise a never-to-be-forgotten reminder of the glamour that was ocean cruising. See page