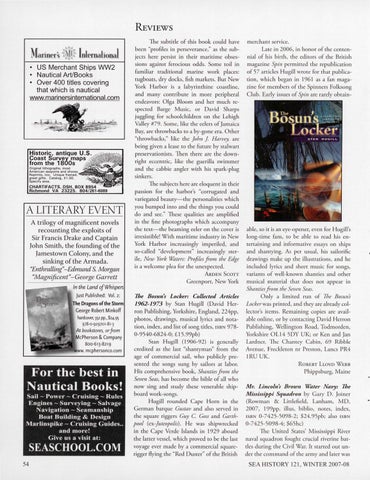 Mariners . . lnlemalional • US Merchant Ships WW2 • Nautical Art/Books • Over 400 titles covering that which is nautical

A LITERARY EVENT A trilogy of magnificent novels recounting the exploits of Sir Francis Drake and Captain John Smith, the founding of the Jamestown Colony, and the sinking of the Armada. ''Enthralling"-Edmund S. Morgan ''Magni.ficent"-George Garrett In the Land ofWhispers Just Published: Vol. 2: The Dragons of the Storm George Robert Minkoff hardcover, 352 pp., $24.95 978-0-929701-81-3

The subtitle of this book could have been "profiles in perseverance," as rhe subjects here persist in their maritime obsessions against ferocious odds. Some roil in fami liar traditional marine work places: tugboats, dry docks, fish markers. Bur New York Harbor is a labyrinthine coastline, and many contribute in more peripheral endeavors: Olga Bloom and her much respected Barge M usic, or David Sharps juggling for schoolchildren on the Lehigh Valley #79. Some, like the eelers ofJamaica Bay, are throwbacks to a by-go ne era. Other "throwbacks," like the john ]. Harvey, are being given a lease to the future by stalwart preservationists. Then there are the downright eccentric, like the guerilla swimmer and the cabbie angler with his spark-plug sinkers. The subjects here are eloquent in their passion for the harbor's "corrugated and variegated beauty-the personalities which yo u bumped into and the things you could do and see." These qualities are amplified in the fine photographs which accompany the rexr-rhe beaming eeler on the cover is irresistible! With maritime industry in New York H arbor increasingly imperiled, and so-called "development" increasingly sterile, New York Wtiters: Profiles from the Edge is a welcome plea for the unexpected. ARDEN SCOTT Greenport, New York

The Bosun's Locker: Collected Articles 1962-1973 by Stan Hugill (David H erron Publishing, Yorkshire, England, 224pp, photos, drawings, musical lyrics and notation, index, and list of song titles, ISBN 9780-9540-6824-0; £ 15 .99pb) Sran Hugill (1906-92) is generally credited as the las t "s hanryman" from the age of commercial sail, who publicly presented the songs sung by sailors at labor. His comprehensive book, Shanties from the Seven Seas, has beco me the bible of all who now sing and study these venerable shipboard work-songs. Hugill rounded Cape Horn in the German barque Gustav and also served in rhe square riggers Guy C. Goss and Garthpool (ex-juteopolis). He was shipwrecked in the Cape Verde Islands in 1929 aboard the latter vessel, which proved to be the last voyage ever made by a commercial squarerigger flying rhe "Red Duster" of the British

merchant service. Lare in 2006, in honor of the centennial of his birth, the editors of the British magazine Spin permitted the republi cation of 57 articles Hugill wrote for that publication, which began in 1961 as a fan magazine for m embers of rhe Spinners Folksong Club. Early iss ues of Spin are rarely obtain -

able, so it is an eye-opener, even for Hugill's long-rime fa ns, to be able to read his entertaining and informative essays on ships and shanrying. As per usual , his sailorific drawings make up the illustrations, and he included lyrics and sheer music for songs, variants of well-known shanties and other musical m aterial rhar does not appear in Shanties from the Seven Seas. Only a limited run of The Bosun's Locker was printed, and they are already collector's item s. Remaining copies are available online, or by contacting David H erron Publishing, Wellington Road, Todmorden, Yorkshire OL14 5DY UK; or Ken and Jan Lardner, The Chantey Cabin, 69 Ribble Avenue, Freckleton nr Preston , Lanes PR4 lRU UK. ROBERT LLOYD WEBB Phippsburg, M aine