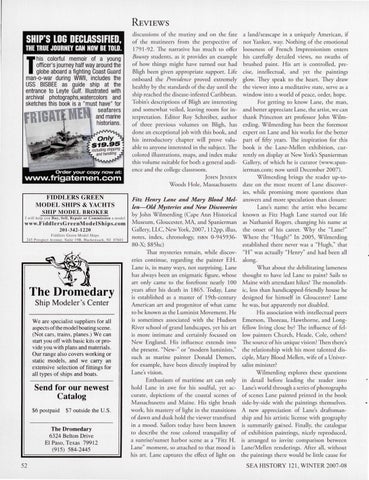 SHIP'S LOG DEClASSIFIED, THE TRUE JOURNEY CAN NOW BE TOLD. his colorful memoir of a young officer's journey half way around the globe aboard a fighting Coast Guard man-o-war during WWII, includes the USS BISBEE as guide ship at the entrance to Leyte Gulf. Illustrated with archival photographs.watercolors and sketches this book is a "must have" for seafarers and marine historians.

d iscussions of the mutiny and o n the fa re of the mutineers fro m the perspecti ve of 179 1-92. The narrative has much to offer Bounty students, as it provides an example of how things migh t have turned out had Bligh been given appro priate support. Life o nboard the Providence proved extremely heal thy by the standards of the day until the ship reached the disease-infested Caribbean . To bin's descriptions of Bligh are interesting and somewhat veiled, leaving room fo r interpretation. Edi to r Roy Schreiber, author of th ree previous volumes on Bli gh , has do ne an exceptional job wi th this book, and his introductory chap ter will prove valuable to anyo ne interested in the subj ect. The colo red illustrations, maps, and index m ake this volume suitable fo r bo th a general audience and the college classroom. J O H N J ENSEN

The Dromedary Ship Modeler's Center We are speciali st suppliers for all aspects of the model boating scene. (Not cars, trains, planes.) We can start you off with basic kits or provide you with plans and materials. Our range also covers working or static models, and we carry an extensive selection of fittings for all types of ships and boats.

Fitz Henry Lane and Mary Blood Mellen-Old Mysteries and New Discoveries by John W ilmerding (Cape Ann Historical M useum, G loucester, MA, and Spanierman G allery, LLC, New York, 2007, l 12pp, illus, no tes, index, chronology, ISBN 0-94593680-X; $8 5hc) That mys teries remai n, while discoveries continue, regard ing the painter EH. Lane is, in many ways, no t surprising. Lan e has always been an enigmatic figure, whose art o nly came to the fo refront nearly 100 years after his death in 1865. Today, Lane is established as a m as ter of 19th-century American art and progenitor of what came to be known as the Lum inist Movement. H e is sometimes associated with the Hudson River school of grand landscapes, ye t his art is m ore intimate and certainly focused on New England. His influence extends into the present. "New-" o r "modern luminists," such as m arine painter Donald D emers, fo r example, have been di rectly inspired by Lane's vision. Enthusias ts of maritime art can only hold Lane in awe for his soulful, yet accurate, depictio ns of the coastal scenes of Massachusetts and Maine. His tight brush wo rk, his m as tery of light in the transitions of dawn and dusk hold the viewer transfixed in a mood. Sailo rs today have been known to describe the rose colored tranquiliry of a sunrise/sunset harbor scene as a "Fitz H. Lane" m oment, so attached to that mood is his art. Lane captures the effect of light o n

a land/seascape in a uniquely American , if no t Yankee, way. No thing of th e emotio nal looseness of French Impressionism en te rs his carefully de railed views, no swaths of brushed paint. His art is controlled, precise, intell ectual, and yet the paintings glow. They speak to the heart. They d raw the viewer into a m editative state, serve as a window into a wo rld of peace, order, hope. Fo r getting to know Lane, the m an, and better appreciate Lane, the artist, we can thank Prin ceto n art professor John W ilmerding. W ilmerding has been the foremost expert on Lane and his works for the better part of fi fry years. The inspiration fo r this book is the Lane-Mellen exhibition, currently on display at New York's Spanierman Gallery, of which he is curaror (www. spanierman .com; now until December 2007). W ilmerding brings the reader up-rodate o n the most recent of Lane discove ries, while promising more questions than answers and more speculation than closure: Lane's nam e: the artist who becam e known as Fitz Hugh Lane started out life as Na thaniel Rogers, changing his nam e at the onset of his career. Why the "Lane?" Where the "Hugh?" In 2005 , Wilmerding established there never was a "H ugh ," that "H " was actually "H enry" and had been all alo ng. W hat abo ut the debilitating lameness though t to have led Lane to paint? Sails ro M aine with attendant hikes? The monolithic, less than handicapped-friendly ho use he designed fo r himself in Glo ucester? Lam e he was, but apparently not disabled . His association with intellectual peers Em erson, Thoreau, H awthorne, and Lo ngfellow living close by? The influence of fellow painters Church, H eade, Cole, others? The source of his unique visio n? 1 h en there's the rela tionship with his m ost talented disciple, M ary Blood Mellen, wife of a Universalist minister? Wilmerding explores these questio ns in detail before leading the reader into Lane's wo rld through a series of photographs of scenes Lane painted printed in the book side-by-side with the paintings themselves. A new appreciation of Lane's draftsm anship and his artistic license with geography is summarily gained. Finally, the catalogue of exhibiti on paintin gs, ni cely reproduced, is arranged ro invite co mparison between Lane/Mellen renderings . After all, without the paintings there wo uld be little cause for SEA HISTORY 12 1, WINTER 2007-08