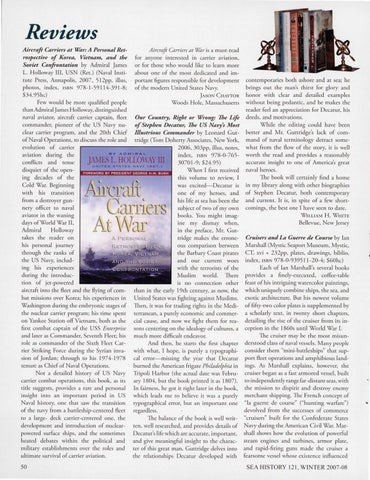 Aircraft Carriers at ~r is a must-read for anyone interested in carrier aviation, or for those who wo uld li ke to learn more abo ut one of the most dedicated and important figures responsible for development of the modem United Stares Navy.

tute Press, Annapolis, 2007, 512pp, illus, photos, index, ISBN 978-1-59114-391-8; $34.95hc) ]ASON C HAYTOR Few would be mo re qualified people Woods H ole, Massachusetts rhanAdmiralJames Holloway, distinguished naval aviator, aircraft carrier captain, fl eet Our Country, Right or Wrong: The Life commander, pioneer of the US Navy nu- of Stephen Decatur, The US Navy's Most clear carrier program, and the 20th C hief Illustrious Commander by Leonard Gutof Naval Operations, to discuss the role and tridge (Tom Doherty Associates, New York, evolution of carrier 2006, 303pp, illus, notes, BY ADMIRAL aviation during the index, ISBN 978-0-765JMlES L. HOLLO\\'AY III conflicts and tense 30701 -9; $24.95) UNITED STATES NAVY (RET.J disquiet of the openWhen I first received FOREWORD BY PRESIDENT GEORGE H.W. BUSH ing decades of the this volume to review, I Cold War. Beginning was excited-Decatur is with his transition one of my heroes, and from a destroyer gunhis life at sea has been the nery officer to naval subj ect of two of my own aviator in the waning books. You might imagdays of World War II, ine my dismay when, Admiral Holloway in the preface, Mr. G urrakes the reader on rridge makes the erronehis perso nal journey o us comparison between through the ranks of the Barbary Coast pirates the US Navy, includand our current woes ing his experiences with the terrorists of the during the introducMuslim world. There tion of jet-powered is no connection other aircraft into the fleet and the flying of comthan in the early 19th century, as now, the bat missions over Korea; his experiences in United States was fi ghting against Muslims. Washingto n during the embryonic stages of 1hen, it was for trading rights in the Medithe nuclear carrier program; his time spent terranean, a purely economic and commeron Yankee Station off Vietnam, both as rhe cial cause, and now we fi ght them for reafirst combat captain of the USS Enterprise so ns centering on the idealogy of cultures, a and later as Commander, Seventh Fleer; his much more difficult endeavor. role as commander of the Sixth Fleer CarAnd then, he starts the first chapter rier Striking Force during the Syrian inva- with what, I hope, is purely a typographision of Jordan; through to his 1974- 1978 cal error- missing the year that D ecatur tenure as Chief of Naval Operations. burned the American frigate Philadelphia in Nor a detailed history of US Navy Tripoli Harbor (the actual dare was Februcarrier combat operations, this book, as its ary 1804, bur the book printed it as 1807). title suggests, provides a rare and personal In fai rness, he got it right later in the book, insight into an important peri od in US which leads me to believe it was a purely Naval history, one that saw the transition typographical error, bur an important on e of the navy from a battleship-centered fleer regardless. to a large- deck carrier-centered o ne, the The balance of the book is well writdevelopment and introduction of nuclear- ten, well researched, and provides derails of powered surface ships, and the som etimes Decatur's life which are accurate, important, heated debates within rhe political and and give m eaningful insight to the characmilitary establishments over the roles and ter of this great man. Gurrridge delves into ultimate survival of carrier aviation. the relationships Decatur developed with 50

contemporaries both ashore and at sea; he brings our the m an's thirst for glory and honor with clear and detailed examples without being pedantic, and he makes the reader feel an appreciation for D ecatur, his deeds, and motivations. While the editing could have been better and Mr. Gumidge's lack of comm and of naval terminology detract somewhat from rhe Bow of the story, it is well worth the read and provides a reasonably accurate insight to one of America's great naval heroes. The book will certainly find a home in my library along with other biographies of Stephen Decatur, both contemporary and current. It is, in spite of a few shortcomings, the best one I have seen to date. WILLl.AJ\1 H. WHITE Bellevue, New Jersey