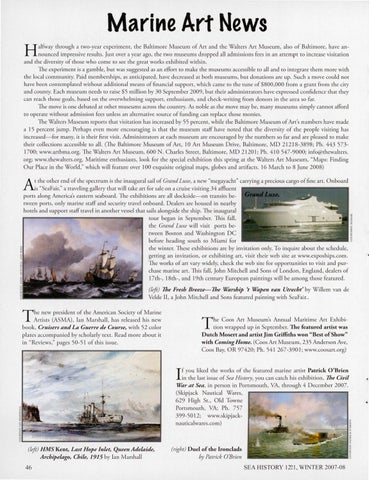 alfway through a two-yea r experiment, the Baltimore Museum of Art and the Walters Art Museum, also of Baltimore, have announced impressive results. Just over a year ago, the two museums dropped all admissions fees in an attempt to increase visitation and the diversity of those who come to see the great works exhibited within. The experiment is a gamble, but was sugges ted as an effo rt to make the museums accessible to all and to integrate them more with the local community. Paid memberships, as anti cipated, have decreased at both museums, but donations are up. Such a move could not have been contemplated without additional means of fin ancial support, which cam e to the tune of $800,000 from a grant from the city and coun ty. Each museum needs to raise $5 millio n by 30 September 2009, but their administrato rs have expressed confidence that they can reach those goals, based o n the overwhelming support, enthusiasm, and check-writing from donors in the area so far. The move is o ne debated at other museums across the co untry. As noble as the move may be, many museums simply cannot afford to operate without admiss ion fees unless an alternative source of fundin g can replace those moni es. The Walters Museum reports that visitation has increased by 55 percent, while the Baltimore Museum of Art&#39;s numbers have made a 15 percent jump. Perhaps even more encouraging is that the museum staff have noted that the diversi ty of the people visiting has increased-for many, it is their first visit. Administrators at each museum are encouraged by the numbers so far a nd are pleased to make their collections accessible to al l. (The Baltim ore Museum of Art, 10 Art Museum Drive, Baltimore, MD 21218-3898; Ph. 443 5731700; www.artbma.org. The Walters Art Museum, 600 N. C harles Street, Baltimore, MD 21201; Ph. 410 547-9000; info@thewalters. org; www.thewalters.org. Maritime enthusiasts, look for the special exhibition this spring at the Walters Art Museum, &quot;Maps: Finding Our Place in the World,&quot; which wilt feature over 100 exquisite original maps, globes and artifacts. 16 March to 8 June 2008)

A t the other end of rhe spectrum is rhe inaugural sail of Grand Luxe, a new &quot;megayacht&quot; carrying a precious cargo of fine art. On board .1&quot;\..is &quot;SeaFair,&quot; a traveling gall ery that will take art for sale on a cruise visiting 34 affluent ports along America&#39;s eastern seaboard. The exhibitions are all dockside-o n transits between ports, o nly marine staff and securi ty travel onboard. Dealers are housed in nearby hotels and support staff travel in another vessel that sails alongside the ship. The inaugural tour began in September. This fall, the Grand Luxe will visit ports between Boston and Washington DC before heading south to Miami for the wi nter. These exhib itions are by invitation only. To inquire about the schedule, getting an invitatio n, or exhibiting art, visit their web sire a t www.expoships.com. The works of art vary widely, check the web site for opportunities to visit and purchase marine art. This fall, John Mitchell and Sons of London, England, dealers of 17th-, 18th-, and 19th century European pai ntings will be among those featured. (left) The Fresh Breeze-The Warship &#39;t Wapen van Utrecht&#39; by Willem van de Velde II, a John Mitchell and Sons featured painting with SeaFair..

he new pres ident of the American Society of Marine Artists (ASMA), Ian Marshall, has released his new book, Cruisers and La Guerre de Course, with 52 color plates acco mpanied by scholarly text. Read more about it in &quot;Reviews,&quot; pages 50-51 of this issue.

f yo u liked the works of the featured mari ne artist Patrick O&#39;Brien in the las t issue of Sea History, yo u can catch his exhibition, The Civil War at Sea, in person in Portsmouth, VA, through 4 D ecember 2007. (Skipjack Nautical Wares, 629 High Sr., Old Towne Porrsmouth, VA; Ph. 757 399-5012; www.skipjacknauticalwares.com)