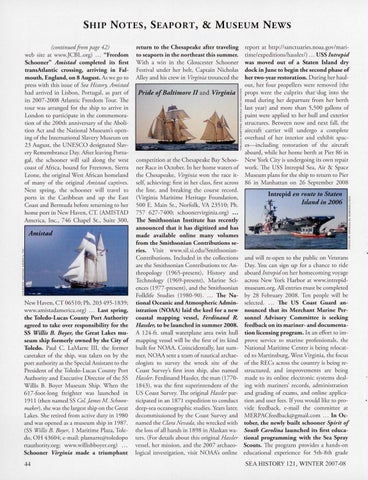 SHIP NOTES, SEAPORT, & MUSEUM NEWS (continued from p age 42) web site at www.JCBL.org) ... "Freedom Schooner" Amistad completed its first transAtlantic crossing, arriving in Falmouth, England, on 8 August. As we go to press with this issue of Sea History, Amistad had arrived in Lisbon, Portugal, as part of its 2007-2008 Atlantic Freedom Tour. The tour was arranged for the ship to arrive in London to participate in the commemoration of the 200th anniversary of the Abolition Act and the National Museum's opening of rhe International Slavery Museum on 23 August, the UNESCO designated Slavery Remembrance Day. After leaving Portugal, the schooner will sail along the west coast of Africa, bound for Freetown, Sierra Leone, the original West African homeland of many of the original Amistad captives. Next spring, the schooner will travel to ports in the Caribbean and up the East Coast and Bermuda before returning to her home port in New Haven, CT. (AMISTAD America, Inc. , 746 C hapel St., Suite 300,

New Haven, CT 06510; Ph. 203 495-1839; www.amistadamerica.org) ... Last spring, the Toledo-Lucas County Port Authority agreed to take over responsibility for the SS Willis B. Boyer, the Great Lakes museum ship formerly owned by the City of Toledo. Paul C. LaMarre III, the former caretaker of the ship, was taken on by the port authority as the Special Assistant to the President of the Toledo-Lucas County Port Authority and Executive Director of the SS Willis B. Boyer Museum Ship. When the 61 7-foot-long freighter was launched in 19 11 (then named SS Col. Ja mes M. Schoonmaker), she was the largest ship on the Great Lakes. She retired from active duty in 1980 and was opened as a museum ship in 1987. (SS Willis B. Boyer, 1 Maritime Plaza, Toledo, OH 43604; e-mail: plamarre@toledopo rtauthority.org; www.willisbboyer.org) ... Schooner Virgi,nia made a triumphant

return to the Chesapeake after traveling to seaports in the northeast this summer. With a win in the Gloucester Schooner Festival under her belt, Captain Nicholas Alley and his crew in Virginia trounced the

report at http: / /sancruaries.noaa.gov/ maritime/expeditions/hassler/) ... USS Intrepid was moved out of a Staten Island dry dock in June to begin the second phase of her two-year restoration. During her haul out, her four propellers were removed (the props were the culprits that dug into the Pride of Baltimore II and Virginia mud during her departure from her berth last year) and more than 5,500 gallons of paint were applied to h er hull and exterior structures . Between now and next fall, the aircraft carrier will undergo a complete overhaul of her interior and exhibit spaces-including restoration of the aircraft aboard, while her home berth at Pier 86 in competition at the Chesapeake Bay Schoo- New York City is undergoing its own repair ner Race in October. In her home waters of work. The USS Intrepid Sea, Air & Space the C hesapeake, Virginia won the race it- M useum plans for the ship to return to Pier self, achieving: first in her class, first across 86 in Manhattan on 26 September 2008 the line, and breaking the course record. Intrepid en route to Staten (Virginia Maritime Heritage Foundation, Island in 2006 500 E. Main Sr. , Norfolk, VA 2351 O; Ph. 757 627-7400; schoonervirginia.org) ... The Smithsonian Institute has recently announced that it has digitized and has made available online many volumes from the Smithsonian Contributions series. Visit www.sil. si.edu/SmithsonianConuibutions. Included in the collections and will re-open to the public on Veterans are the Smithsonian Contributions to: An- Day. You can sign up for a chance to ride thropology (1965-present), History and aboard Intrepid on her homecoming voyage Technology (1969-present) , Marine Sci- across New York Harbor at www.inuepidences (1977-present), and the Smithsonian museum.org. All entries must be completed Folklife Studies (1980-90) .... The Na- by 28 February 2008. Ten people will be tional Oceanic and Atmospheric Admin- selected. . . . The US Coast Guard anistration (NOAA) laid the keel for a new nounced that its Merchant Marine Percoastal mapping vessel, Ferdinand R. sonnel Advisory Committee is seeking Hassler, to be launched in summer 2008. feedback on its mariner- and documentaA 124-ft. small waterplane area twin hull tion licensing program. In an effort to immapping vessel will be the first of its kind prove service to marine professionals, the built for NOAA. Coincidentally, last sum- National Maritime Center is being relocatm er, NOAA sent a team of nautical archae- ed to Martinsburg, West Virginia, the focus ologists to survey the wreck site of the of the RECs across the country is being reCoast Survey's first iron ship, also named structured, and improvements are being Hassler. Ferdinand Hassler, the man (1770- made to its online electronic systems deal1843), was the first superintend ent of the ing with mariners' records, administration US Coast Survey. The original Hassler par- and grading of exams, and online applicaticipated in an 1871 expedition to conduct tion and user fees. If you wo uld like to prodeep-sea oceanographic studies. Years later, vide feedb ack, e-mail the committee at decommissioned by the Coast Survey and MERPACfeedback@gmail. com ... In Ocnamed the Clara Nevada, she wrecked wi th tober, the newly built schooner Spirit of the loss of all hands in 1898 in Alaskan wa- South Carolina launched its first educaters. (Fo r details about this original Hassler tional programming with the Sea Spray vessel, her mission, and the 2007 archaeo- Scouts. The program provides a hands-on logical investigation, visit NOAA's online educational experience for 5th-8 th grade SEA HISTORY 121 , WINTER2007-08