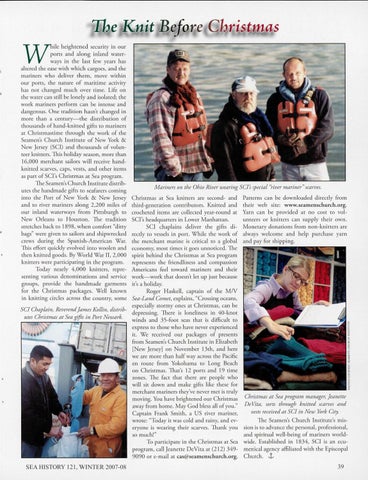 ile heightened security in our om and along inland waterways in the last few years has altered the ease with which cargoes, and the mariners who deliver them, move within our ports, the nature of maritime activity has not changed much over time. Life on the water can still be lonely and isolated; the work mariners perform can be intense and dangerous. One tradition hasn't changed in more than a century-the distribution of thousands of hand-knitted gifts to mariners at Christmastime through the work of the Seamen's Church Institute of New York & New Jersey (SCI) and thousands of volunteer knitters. This holiday season, more than 16,000 merchant sailors will receive handknitted scarves, caps, vests, and other items as part of SCI's Christmas at Sea program. The Seamen's Church Institute distributes the handmade gifts to seafarers coming into the Port of New York & New Jersey and to river mariners along 2,200 miles of our inland waterways from Pittsburgh to New Orleans to Houston. The tradition stretches back to 1898, when comfort "ditty bags" were given to sailors and shipwrecked crews during the Spanish-American War. This effort quickly evolved into woolen and then knitted goods. By World War II , 2,000 knirrers were participating in the program. Today nearly 4,000 knitters, representing various denominations and service groups, provide the handmade garmems for the Christmas packages. Well known in knitting circles across the country, some

Christmas at Sea knitters are second- and third-generation contributors. Knitted and crocheted items are collected year-round at SCI's headquarters in Lower Manhattan. SCI chaplains deliver the gifts directly to vessels in port. While the work of the merchant marine is critical to a global economy, most times it goes unnoticed. The spirit behind the Christmas at Sea program represents the friendliness and compassion Americans feel toward mariners and their work-work that doesn't let up just because it's a holiday. Roger Haskell, captain of the M/V Sea-Land Comet, explains, "Crossing oceans, especially stormy ones at Christmas, can be SCI Chaplain, ReverendJames Kol/in, distribdepressing. There is loneliness in 40-knot utes Christmas at Sea gifts in Port Newark. winds and 35-foot seas that is difficult to express to those who have never experienced it. We received our packages of presents from Seamen's Church Institute in Elizabeth [New Jersey] on November 13th, and here we are more than half way across the Pacific en route from Yokohama to Long Beach on Christmas. Thar's 12 ports and 19 time zones. The fact that there are people who will sit down and make gifts like these for merchant mariners they've never met is truly moving. You have brightened our Christmas away from home. May God bless all of you." Captain Frank Smith, a US river mariner, wrote: "Today it was cold and rainy, and everyone is wearing their scarves. TI1ank you so much!" To participate in the Christmas at Sea program, call Jeanene DeVira at (212) 3499090 or e-mail at cas@seamenschurch.org. SEA HISTORY I 21, WINTER 2007-08

Parrerns can be downloaded directly from their web site: www.seamenschurch.org. Yarn can be provided at no cost to volunteers or knitters can supply their own. Monetary donations from non-knirrers are always welcome and help purchase yarn and pay for shipping.

The Seamen's Church Institure's mission is to advance the personal, professional, and spiritual well-being of mariners worldwide. Established in 1834, SCI is an ecumenical agency affiliated with the Episcopal Church. J,