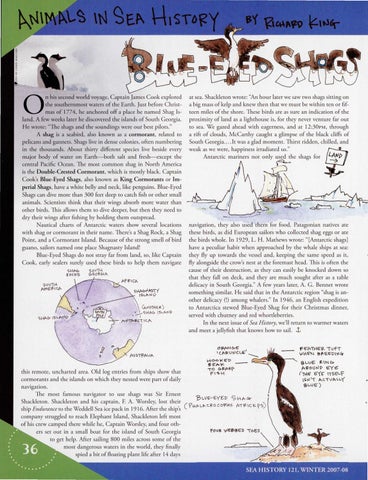 n his second world voyage, Captain James Cook explored the southernmost waters of the Earth. Just before Christmas of 177 4, he anchored off a place he named Shag Island. A few weeks later he discovered the islands of South Georgia. He wrote: "The shags and the soundings were our best pilots." A shag is a seabird, also known as a cormorant, related to pelicans and gannets. Shags live in dense colonies, often numbering in the thousands. About thirty different species live beside every major body of water on Earth-both sale and fresh-except the central Pacific Ocean. The most common shag in North America is the Double-Crested Cormorant, which is mostly black. Captain Cook's Blue-Eyed Shags, also known as King Cormorants or Imperial Shags, have a white belly and neck, like penguins. Blue-Eyed Shags can dive more than 300 feet deep to catch fish or other small animals. Scientists think that their wings absorb more water than other birds. This allows chem to dive deeper, but then they need to dry their wings after fishing by holding them outspread. Nautical charts of Antarctic waters show several locations with shag or cormorant in their name. There's a Shag Rock, a Shag Point, and a Cormorant Island. Because of che strong smell of bird guano, sai lors named one place Shagnasty Island! Blue-Eyed Shags do not stray far from land, so, like Captain Cook, early sealers surely used these birds to help them navigate

ac sea. Shackleton wrote: "An hour later we saw two shags sitting on a big mass of kelp and knew then chat we must be within ten or fifteen miles of che shore. These birds are as sure an indication of the proximity of land as a lighthouse is, for they never venture far out to sea. We gazed ahead with eagerness, and at 12:30PM, through a rifr of clouds, McCarthy caught a glimpse of the black cliffs of South Georgia ... .le was a glad moment. Thirst ridden, chilled, and weak as we were, happiness irradiated us." Antarctic mariners not only used the shags for LAtJp

navigacion , they also used them for food. Patagonian natives ate these birds, as did European sailor~ who collected shag eggs or ace the birds whole. In 1929, L. H. Mathews wrote: " [Antarctic shags] have a peculiar habit when approached by the whale ships at sea: they fly up towards the vessel and, keeping the same speed as it, fly alongside the crow's nest at the foremast head. This is often the cause of their descrucrion, as they can easily be knocked down so that chey fall on deck, and they are much sought after as a table delicacy in South Geo rgia." A few years later, A. G. Bennet wrote somethi ng similar. He said that in the Antarctic region "shag is another delicacy(!) among whalers." In 1946, an English expedition to Antarctica stewed Blue-Eyed Shag for their Christmas dinner, served with chutney and red whort!eberries . In the next issue of Sea History, we'll return to warmer waters and meet a jellyfish that knows how to sail. J, 012-f"<l'll'.:>€

this remote, uncharted area. Old log entries from ships show that co rmorants and the islands on which they nested were part of daily navigation. The most famous navigator to use shags was Sir Ernest Shackleton. Shackleton and his captai n, F. A. Worsley, lose their ship Endurance to the Weddell Sea ice pack in 1916. After che ship's company struggled to reach Elephant Island, Shackleton left most of his crew camped there while he, Captain Worsley, and four others set out in a small boat for the island of South Georgia to get help. After sailing 800 miles across some of the most dangerous waters in the world, they finall y spied a bit of floating plant life after 14 days