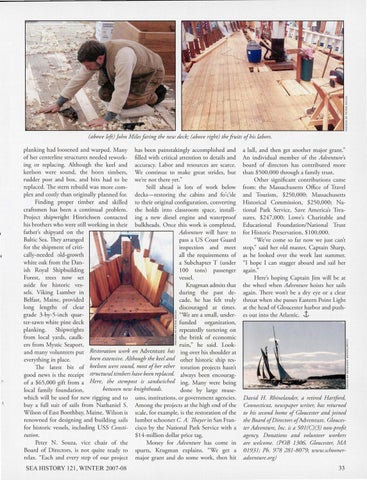 (above left) john Miles faring the new deck; (above right) the fruits ofhis labors. planking had loosened and warped. Many has been painstakingly accomplished and of her centerline structures needed rework- filled with critical attention to details and ing or replacing. Although the keel and accuracy. Labor and resources are scarce. keelson were sound, the horn timbers, We continue to make great strides, but rudder post and box, and bits had to be we're not there yet." replaced . The stern rebuild was more comStill ahead is lots of work below plex and costly than originally planned for. decks-restoring the cabins and fo'c'sle Finding proper timber and skilled to their original configuration, converting craftsmen has been a continual problem. the holds into classroom space, installProject shipwright Hinrichsen contacted ing a new diesel engine and waterproof his brothers who were still working in their bulkheads. Once this work is completed, father's shipyard on the ,....,....,.....,- --...-...---.....-------, Adventure will have to Baltic Sea. They arranged pass a US Coast Guard for the shipment of critiinspection and meet cally-needed old-growth all the requirements of white oak from the Dana Subchapter T (under ish Royal Shipbuilding 100 tons) passenger Forest, trees now set vessel. aside for historic vesKrugman admits that sels. Viking Lumber in during the past deBelfast, Maine, provided cade, he has felt truly long lengths of clear discouraged at times. grade 3-by-5-inch quar"We are a small, underter-sawn white pine deck funded organization, planking. Shipwrights repeatedly teetering on from local yards, caulkthe brink of economic ers from Mystic Seaport, ruin," he said. Lookand m any volunteers put Restoration work on Adventure has ing over his shoulder at everything in place. been extensive. Although the keel and other historic ship resThe latest bit of keelson were sound, most of her other toration projects hasn't good news is the receipt structural timbers have been replaced. always been encouragof a $65, 000 gift from a H ere, the stempost is sandwiched ing. Many were being local family foundation, between new knightheads. done by large musewhich will be used for new rigging and to urns, institutions, or government agencies . buy a full suit of sails from Nathaniel S. Among the projects at the high end of the Wilso n of East Boothbay, Maine. Wilson is scale, for example, is the restoration of the renowned for designing and building sails lumber schooner C. A. Thayer in San Franfor historic vessels, including USS Consti- cisco by the National Park Service with a tution. $ 14-million dollar price tag. Peter N. Souza, vice chair of the Money for Adventure has co me in Board of Directors, is not quite ready to spurts, Krugman explains. "We get a relax. "Each and every step of our proj ect m ajor grant and do so me work, then hit

a lull, and then get another major grant." An individual m ember of the Adventure's board of directors has contributed more than $5 00 ,000 through a family trust. Other significant contributions came from: the Massachusetts Office of Travel and Tourism, $25 0,000; Massachusetts Historical Commission, $25 0,000; National Park Service, Save America's Treasures, $247,000; Lowe's Charitable and Educational Foundation/National Trust for Historic Preservation, $ 100,000 . "We've come so far now we just can't stop,'' said her old master, Captain Sharp, as he looked over the work last summer. "I hope I can stagger aboard and sail her again." Here's hoping Captain Jim will be at the wheel when Adventure hoists her sails again. There won't be a dry eye or a clear throat when she passes Eastern Point Light at the head of Gloucester harbor and pushes out into the Atlantic. ..t