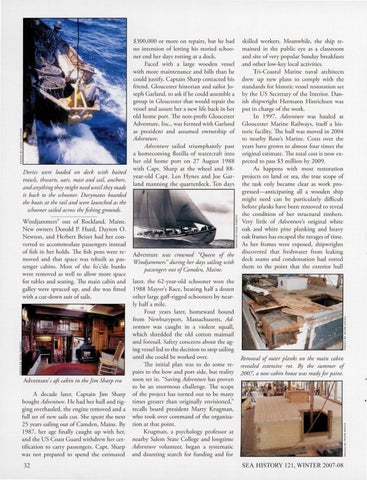 Dories were Loaded on deck with baited trawls, thwarts, oars, mast and sail anchors, and anything they might need until they made it back to the schooner. Dorymates boarded the boats at the rail and were launched as the schooner sailed across the fishing grounds. W indj ammers&quot; ouc of Rockland, Maine. New owners Donald P. Hurd, Dayton 0. Newton, and Herbert Beizer had her converted to accommodace passengers inscead of fish in her holds. The fish pens were removed and chac space was rebuilc as passenger cabins. Mose of che fo&#39;c&#39;sle bunks we re removed as well to allow more space for tables and seacing. The main cabin and galley we re spruced up, and she was fined wich a cue-down suic of sails.

Advemure&#39; s aft cabin in the Jim Sharp era A decade lacer, Captain Jim Sharp boughcAdventure. He had her hull and rigging overhauled, che engine removed and a full sec of new sails cut. She spem che nexc 25 years sailing ouc of Camden, Maine. By 1987, her age finally caughr up wich her, and che US Coasc Guard wichdrew her cercificacion to carry passengers. Capt. Sharp was noc prepared to spend che escimaced 32

$300,000 or more on repairs, but he had no imenrion of letting his storied schooner end her days rotting at a dock. Faced with a large wooden vessel with more mainrenance and bills than he could juscify, Captain Sharp contacted his friend, G loucester historian and sailor Joseph Garland, co ask ifhe could assemble a group in Gloucester that would repair the vessel and assure her a new life back in her old home port. The non-profit Gloucester Adventure, Inc., was formed wich Garland as president and ass umed ownership of Adventure. Adventure sailed uiumphandy past a homecoming fl otilla of watercraft into her old home port on 27 August 1988 with Capt. Sharp at the wheel and 88year-old Capt. Leo Hynes and Joe Garland manning the quanerdeck. Ten days

Adventure was crowned &quot;Queen of the Windjammers&quot; during her days sailing with passengers out of Camden, Maine. later, the 62-year-old schooner won the 1988 Mayor&#39;s Race, beating half a dozen other large gaff-rigged schooners by nearly half a mile. Four years later, homeward bound from Newburypo rt, Massachuserrs, Adventure was caught in a violenr squall, which shredded che old couon mainsail and foresai l. Safery concerns abouc che aging vessel led to the decision to stop sailing until she could be wo rked over. The inirial plan was co do some repairs to the bow and port side, but realiry soon set in . &quot;Saving Adventure has proven co be an enormous challenge. The scope of the project has turned o uc to be many cimes greacer chan originally envisioned,&quot; recalls board president Marry Krugman, who took over command of the organization at that point. Krugman, a psychology professor ac nearby Salem Stace College and longtime Adventure volunteer, began a systematic and daunting search for funding and for

skilled workers. Meanwhile, the ship remained in che public eye as a classroom and site of very popular Sunday breakfascs and other low-key local activities. Tri-Coastal Marine naval architeccs drew up new plans to comply wich the standards for historic vessel restoration set by the US Secretary of the Interior. Danish shipwrighc Hermann Hinrichsen was put in charge of the work. In 1997, Adventure was hauled at Gloucester Marine Railways, itself a historic faciliry. The hull was moved in 2004 co nearby Rose&#39;s Marine. Costs over che years have grown co almost four times the original estimate. The total cost is now expected tO pass $3 million by 2009. As happens with most restoration projects on land or sea, the true scope of the task only became clear as work progressed-anticipating all a wooden ship might need can be particularly difficult before planks have been removed co reveal the condition of her structural timbers. Very litde of Adventure&#39;s original white oak and white pine planking and heavy oak frames has escaped the ravages of time. As her frames were exposed, shipwrights discovered thac freshwacer from leaking deck seams and condensation had roued them co the point that the exterior hull

Removal of outer planks on the main cabin revealed extensive rot. By the summer of 2007, a new cabin house was ready for paint.