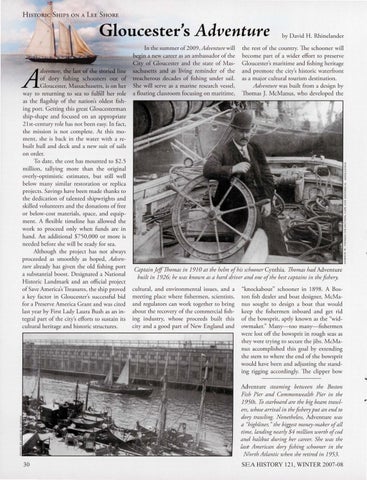 Gloucester&#39;s Adventure In the summer of2009 , Adventure will begin a new career as an ambassador of the Ciry of G loucester and the state of Massachusetts and as living reminder of the treacherous decades of fishing under sail. She will serve as a marine research vessel, a floating classroom focusing on maritime,

the res t of the country. The schoo ner will becom e part of a wider effort to preserve G lo ucester&#39;s maritime and fishing heritage and pro mote the ciry&#39;s historic wa terfront as a m ajor cultural tourism destination. Adventure was built from a des ign by Thom as J. McManus, who developed the

dventure, the lase of the storied line of dory fishing schooners out of Gloucester, Massachusetts, is on her way to returning to sea to fulfill her role as the flagship of the nation&#39;s oldest fishing port. Getting this great G loucesterman ship-shape and foc used on an appropriate 2 1st-century ro le has not been easy. In fact, the mission is not complete. At this momen t, she is back in the water with a rebuilt hull and deck and a new suit of sails on order. To date, the cost has m ounted to $2.5 million , tallying more than the original overly-optim istic estimates, but still well below m any similar restoration or replica proj ects. Savings have been m ade thanks to the dedication of talented shipwrights and skilled volunteers and the donations of free or below-cost m aterials, space, and equipm ent. A flexible timeline has allowed the work to proceed only when funds are in hand . An additional $75 0,000 or more is needed before she will be ready for sea. Altho ugh the project has no t always proceeded as smoothly as hoped, Adventure already has given the old fishing port Captain Jeff Thomas in 19 10 at the helm ofhis schooner Cynthia. Thomas had Adventure a substantial boost. D esignated a N ational built in 1926; he was known as a hard driver and one ofthe best captains in the fishery. H istoric Landmark and an official proj ect of Save America&#39;s Treasures, the ship proved cultural, and enviro nmental issues, and a &quot;knockabout&quot; schoo ner in 1898. A Bosa key factor in Gloucester&#39;s successful bid meeting place where fishermen, scientists, ton fish dealer and boat designer, M cMafo r a Preserve America G rant and was cited and regulators can work togerher to bring nus sought to design a boar that would las t year by First Lady Laura Bush as an in- about the recove ry of the commercial fish- keep rhe fishermen inboard and get rid tegral part of the ciry&#39;s efforts to sustain its ing industry, whose proceeds built rhis of the bowsprit, aptly known as rhe &quot;widciry and a good part of New England and owmaker.&quot; M any-too many-fishermen cultural heritage and histo ri c structu res. were lost off the bowsprit in rough seas as rhey were trying to secure the jibs. M cManus accomplished rhis goal by extending the stem to where rhe end of the bowsprit wo uld have been and adjusting rhe standing rigging acco rdingly. The clipper bow

Adventure steaming between the Boston Fish Pier and Commonwealth Pier in the 1950s. To starboard are the big beam trawlers, whose arrival in the fishery p ut an end to dory trawling. Nonetheless, Adventure was a &quot;highliner, &quot;the biggest money-maker of all time, landing nearly $4 million worth ofcod and halibut during her career. She was the lastt American dory fishing schooner in the NTorth Atlantic when she retired in 1953.