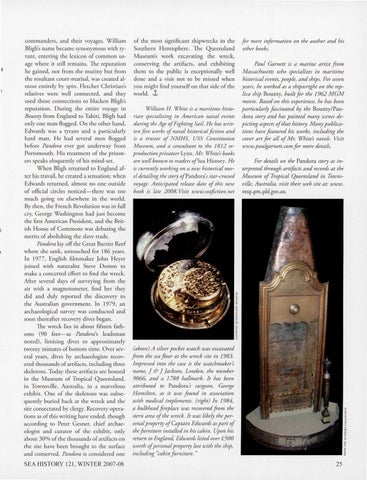 commanders, and their voyages. William Bligh's name became synonymous with tyrant, entering the lexicon of common usage where it still remains. The reputation he gained, not from the mutiny but from the resultant co urt-marital, was created almost entirely by sp in. Fletcher Christian's relatives were well connected, and they used those connections to blacken Bligh's reputation. During the entire voyage in Bounty from England to Tahiti, Bligh had only one man flogged. On the other hand, Edwards was a tyrant and a particularly hard man. He had several men flo gged before Pandora ever got underway from Portsmouth. His treatment of the prisoners speaks eloquently of his mind-set. When Bligh returned to England after his travail, he created a sensation; when Edwards returned, almost no one outside of official circles noticed-there was too much going on elsewhere in the world. By then, the French Revolution was in full cry, George Washington had just become the first American President, and the British House of Commons was debating the merits of abolishing the slave trade. Pandora lay off the G reat Barrier Reef where she sank, untouched for 186 years. In 1977, English filmmaker John Heyer joined with naturalist Steve Damm to make a co ncerted effort to find the wreck. After several days of surveying from the air with a magnetometer, find her they did and duly reported the discovery to the Australian government. In 1979, an archaeological survey was conducted and soon thereafter recovery dives began. The wreck lies in about fifteen fathoms (90 feet-as Pandora's leadsman noted), limiting dives to approximately twenty minutes of bottom time. Over several years, dives by archaeologists recovered thousands of artifacts, including three skeletons. Today these artifacts are housed in the Museum of Tropical Queensland, in Townsville, Australia, in a marvelous exhibit. One of the skeletons was subsequently buried back at the wreck and the site consecrated by clergy. Recovery operations as of this writing have ended, though according to Peter Gesner, chief archaeologist and curator of the exhibit, only about 30% of the thousands of artifacts on the site have been brought to the surface and conserved. Pandora is considered one

of the most significant shipwrecks in the Southern Hemisphere. The Queensland Museum's work excavating the wreck, conserving the artifacts, and exhibiting them to the public is exceptionally well done and a visit not to be missed when you might find yourself on that side of the world. j:, William H. White is a maritime historian specializing in American naval events during the Age ofFighting Sail. He has written five works of naval historical fiction and is a trustee of NMHS, USS Constitution Museum, and a consultant to the 1812 reproduction privateer Lynx. Mr. White's books are well known to readers ofSea History. He is currently working on a new historical novel detailing the story ofPandora's star-crossed voyage. Anticipated release date of this new book is late 2008. Visit www.seafiction.net

for more information on the author and his other books. Paul Garnett is a marine artist from Massachusetts who specializes in maritime historical events, people, and ships. For seven years, he worked as a shipwright on the replica ship Bounty, built for the 1962 MGM movie. Based on this experience, he has been particularly fascinated by the Bo unty/Pandora story and has painted many scenes depicting aspects ofthat history. Many publications have featured his works, including the cover art for all of Mr. White's novels. Visit www.paulgarnett.com for more details. For details on the Pandora story as interpreted through artifacts and records at the Museum of Tropical Queensland in Townsville, Australia, visit their web site at: www. mtq.qm. qld. gov. au.

(above) A silver pocket watch was excavated from the sea floor at the wreck site in 1983. Impressed into the case is the watchmaker's name, j & j Jackson, London, the number 9866, and a 1788 hallmark. It has been attributed to Pandora's surgeon, George Hamilton, as it was found in association with medical implements. (right) In 1984, a bulkhead fireplace was recovered from the stern area ofthe wreck. It was likely the personal property of Captain Edwards as part of the furniture installed in his cabin. Upon his return to England, Edwards listed over ÂŁ500 worth ofpersonal property lost with the ship, including "cabin furniture. "