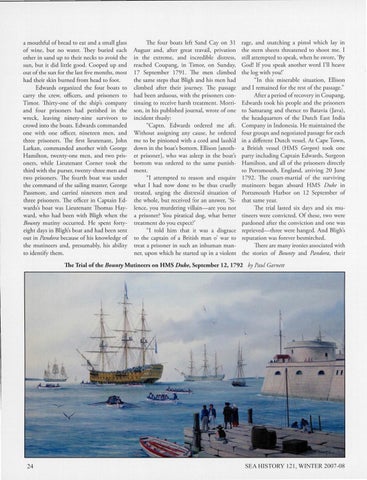 a mouthful of bread to ear and a sm all glass The fo ur boars left Sand Cay on 3 1 of wine, bur no water. They buried each August and, after great travail, privation other in sand up to their necks to avoid the in the extreme, and incredible distress, sun, bur it did little good. Cooped up and reached Coupang, in Timor, on Sunday, our of the sun for the last five months, m ost 17 September 179 1. The m en climbed had their skin burned from head to foo t. rhe sam e steps rhar Bligh and his men had Edwards organized rhe fo ur boars to climbed afte r their journey. The passage carry the crew, officers, and prisoners to had been arduo us, with the prisoners conTimor. Thirty-o ne of the ship's company tinuing to receive harsh treatment. Morriand fo ur prisoners had perished in the so n, in his published journal, wrote of one wreck, leaving ninety- nine survivo rs to incident thusly: "Capen . Edwards ordered me aft. crowd into rhe boars. Edwards commanded one with one officer, nineteen m en , and W irhour assigning any cause, he o rdered three prisoners. The first lieutenant, John me to be pinioned with a cord and lassh'd Larkan , commanded another with George down in the boar's bottom. Ellison [anothH amilton, twe nty-one m en , and two pris- er prisoner), who was asleep in the boat's oners, while Lieutenant Corner rook the bo ttom was ordered to the same punishthird with the purser, twen ty- three men and m ent. "I attempted to reason and enquire two priso ners. The fourth boar was under the command of the sailing mas ter, George what I had now done to be thus cruelly Passmore, and carried nineteen men and treated, urging the disrress'd situation of three prisoners. The officer in Captain Ed- the whole, bur received fo r an answer, 'Siwards's boar was Lieutenant Thomas H ay- lence, you murdering villain-are yo u nor ward, who had been with Bligh when the a prisoner? You piratical dog, what better Bounty mutiny occurred . H e spent fo rry- treatment do yo u expect?' "I rold him that it was a disgrace eighr days in Bligh's boar and had been sent o ur in Pandora because of his knowledge of to the captain of a British m an o' war to the mu tineers and, presumably, his ability treat a prisoner in such an inhuman m anto identify them . ner, upon which he started up in a violent

rage, and snatching a pistol which lay in the stern sheers threatened to shoo t me. I still attem p ted to speak, when he swore, 'By God! If yo u speak another word I'll heave the log with yo u! ' "In this miserable situation, Ellison and I remained fo r rhe rest of rhe passage." After a period of recovery in Coupang, Edwards rook his peo ple and the prisoners to Samarang and thence to Batavia (Java) , the headq uarters of the Dutch East India Company in Indones ia. H e maintained the fo ur gro ups and negotiated passage fo r each in a different D urch vessel. Ar Cape Town, a British vessel (H MS Gorgon) rook one parry including Captain Edwards, Surgeon H amil to n, and all of the prisoners directly to Portsmo uth , England, arriving 20 June 1792. The court-m artial of the surviving mutineers began aboard H MS Duke in Po rtsm outh H arbor on 12 September of rhar sam e year. The trial las ted six days and six mutineers were convicted. O f these, two were pardoned after the conviction and one was reprieved- three were hanged. And Bligh's reputatio n was fo rever besmirched . There are m any iro nies associated wi th the stories of Bounty and Pandora, their

The Trial of the Bounty Mutineers on HMS Duke, September 12, 1792 by Paul Garnett