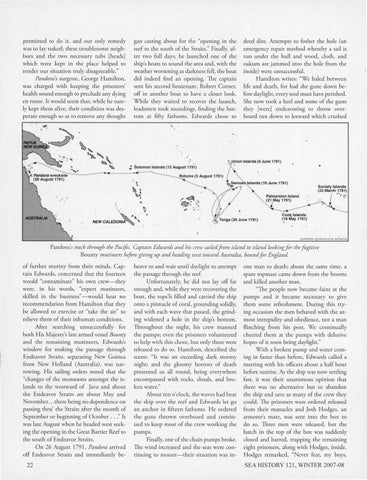 permitted to do it, and our only remedy was to lay naked; these troublesome neighbors and the two necessary rubs [heads) which were kept in the place helped to render our si tuation truly disagreeable." Pandora's surgeon, George Hamilton, was charged with keeping the prisoners' health sound enough to preclude any dying en roure. It would seem that, while he surely kept chem alive, their condition was desperate enough so as to remove any thought ~·

gan casting about for the "opening in the reef to the south of the Straits." Finally, after two full days, he launched one of the ship's boats to sound the area and, with the weather worsening as darkness fell , the boat did indeed find an opening. The captain sent his second lieutenant, Robert Corner, off in another boat to have a closer look. While they waited to recover the lau nch, leadsmen took soundings, finding the botrom at fifty fathoms. Edwards chose to

deed dire. Attempts to fother the hole (an emergency repair method whereby a sail is run under the hull and wood, cloth, and oakum are jammed into the hole from the inside) were unsuccessful. Hamilton writes: "We baled between life and death, for had she gone down before daylight, every soul must have perished. She now took a heel and som e of the guns they [were] endeavoring to throw overboard run down to leeward which crushed

Pandora's track through the Pacific. Captain Edwards and his crew sailed from island to island looking for the fugitive Bounty mutineers before giving up and heading west toward Australia, bound fo r England. of further mutiny from their minds. Captain Edwards, concerned that the fourteen wo uld "contaminate" his own crew-they were, in his words, "expert mutineers, skilled in the business"-would hear no recommendation from Hamilton that they be allowed to exercise or "take the air" to relieve them of their inhuman conditions. After searching unsuccessfully for both His Majesty's late armed vessel Bounty and the remaining mutineers, Edwards's window for making the passage through Endeavor Straits, separating New Guinea from New Holland (Australia), was narrowing. His sailing orders noted that the "changes of the monsoons amongst the islands to the westward of Java and about the Endeavor Straits are about May and November . . . there being no dependence on passing thru' the Straits after the month of September or beginning of October ..." It was late August when he headed west seeking the opening in the Great Barrier Reef to the south of Endeavor Straits. On 26 August 1791 , Pandora arrived off Endeavor Straits and immediately be22

heave to and wait until daylight to attempt the passage through the ree( Unfortunately, he did not lay off far enough and, while they were recovering the boat, the tops'ls filled and carried the ship onto a pinnacle of coral, grounding solidly, and wi th each wave that passed, the grinding widened a hole in the ship's bottom. Throughout the night, his crew manned the pumps; even the prisoners volunteered to help with chis chore, but only three were released to do so. Hamilton, described the scene: "It was an exceeding dark stormy night; and the gloomy horrors of death presented us all round, being everywhere encompassed with rocks, shoals, and broken water." Abo ut ten o'clock, the waves had beat the ship over the reef and Edwards let go an anchor in fifteen fathoms. He ordered the guns thrown overboard and continued to keep most of the crew working the pumps. Finally, one of the chain pumps broke. The wind increased and the seas were continuing to mount-their situation was in-

one man to death; abo ut the same time, a spare topmast came down from the booms and killed another man. "The people now became faint at the pumps and it became necessary to give them some refreshment. During this trying occasion the men behaved with the utmost intrepidity and obedience, not a man flinching from his post. We contin ually cheered them at the pumps with delusive hopes of it soon being daylight." With a broken pump and water coming in faster than before, Edwards called a meeting with his officers about a half hour before sunrise. As the ship was now settling fast, it was their unanimo us opinion that there was no alternative but to abandon the ship and save as many of the crew they could. The prisoners were ordered released from their manacles and Josh Hodges, an armorer's mate, was sent into the box to do so. Three men were released, but the hatch in the top of the box was suddenly closed and barred, trap ping the remaining eight prisoners, along with Hodges, inside. Hodges remarked, "Never fear, my boys,