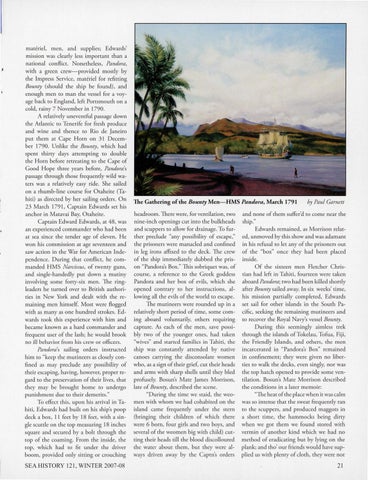 materiel, men , and supplies; Edwards' mission was clearly less important than a national conflict. Nonetheless, Pandora, with a green crew-provided mostly by the Impress Service, materiel for refitting Bounty (sho uld the ship be found), and enough men to man the vessel for a voyage back to England, left Porrsmouth on a cold , rainy 7 November in 1790. A relatively uneventful passage down the Atlantic to Tenerife for fresh produce and wine and thence to Rio de Janeiro put them at Cape Horn on 3 1 December 1790. Unlike the Bounty, which had spent thirty days attempting to double the Horn before retreating to the Cape of Good Hope three years before, Pandora's passage through those frequently wild waters was a relatively easy ride. She sailed on a rhumb-line course for Otaheite (Tahiti) as directed by her sailing orders. On 23 March 179 1, Captain Edwards set his anchor in Matavai Bay, Otaheite. Captai n Edward Edwards, at 48, was an experienced commander who had been at sea si nce the tender age of eleven. H e wo n his commission at age seventeen and saw actio n in the War for American Independence. During that conflict, he commanded HMS Narcissus, of twenty guns, and single-handedly put down a mutiny involving so me forty-six men. The ringleaders he turned over to British authorities in New York and dealt with the remaining men himself. Most were flogged with as many as one hundred strokes. Edwards took this experience with him and became known as a hard commander and frequent user of the lash; he would brook no ill behavior from his crew or officers. Pandora's sailing orders instructed him to "keep the mutineers as closely confin ed as may preclude any possibility of their escaping, having, however, proper regard to the preservation of their lives, that they may be brought home to undergo punishment due to their demerits." To effect this, upon his arrival in Tahiti, Edwards had built on his ship's poop deck a box, 11 feet by 18 feet, with a single scuttle on the top measuring 18 inches square and secured by a bolt through the top of the coaming. From the inside, the top, which had to fit under the driver boom, provided only sitting or crouching

The Gathering of the Bounty Men-HMS Pandora, March 1791 headroom . There were, for ventilation, two nine-inch openings cut into the bulkheads and scuppers to allow for drainage. To further preclude "any possibility of escape," the prisoners were m anacled and confined in leg irons affixed to the deck. The crew of the ship immediately dubbed the prison "Pandora's Box." This sobriquet was, of course, a reference to the Greek goddess Pandora and her box of evils, which she opened contrary to her instructions, allowing all the evils of the world to escape. The mutineers were rounded up in a relatively short period of time, some coming aboard voluntarily, others requiring capture. As each of the men, save possibly two of the yo unger ones, had taken "wives" and starred famil ies in Tahiti, the ship was constantly arte nded by native canoes carrying the disconsolate wo men who, as a sign of their grief, cut their heads and arms with sharp shells until they bled profusely. Bosun's Mate James Morrison, late of Bounty, described the scene. "During the time we staid, the weomen wi th whom we had cohab ited on the island came frequently under the stern (bringing their children of which there were 6 born, four girls and two boys, and several of the weomen big with child) cutting their heads till the blood discolloured the water about them, but they were always drive n away by the Caprn's orders

and none of them suffer'd to com e near the ship." Edwards remained, as Morrison related, unmoved by this show and was adamant in his refusal to let any of the prisoners out of the "box" once they had been placed inside. Of the sixteen men Fletcher C hristian had left in Tahiti, fourteen were taken aboard Pandora; two had been ki lled shortly after Bounty sailed away. In six weeks' time, his mission partially completed, Edwards set sail for other islands in the South Pacific, seeking the remaining mutineers and to recover the Royal Navy's vessel Bounty. During this seemingly aimless trek through the islands ofTokelau, Tofua, Fiji, the Friendly Islands, and others, the men incarcerated in "Pandora's Box" remained in co nfinement; they were given no liberties to walk the decks, even singly, nor was the top hatch opened to provide some ventilation. Bosun's M ate Morrison described the condi tions in a later memoir: "The heat of the place when it was calm was so intense that the sweat frequently ran to the scuppers, and produced m aggots in a short time, the hammocks being dirty when we got them we found stored with vermin of another kind which we had no method of eradicating but by lying on the plank; and tho' our friends would have supplied us with plenty of cloth, they were not