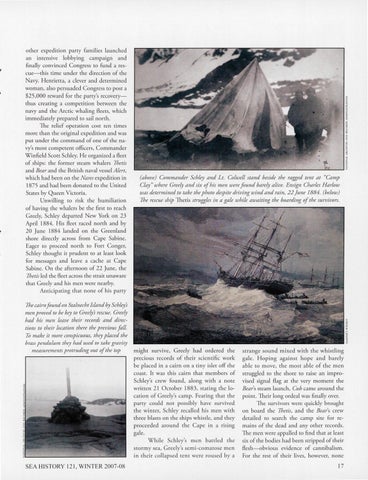 ocher expediti on parry families launched an intensive lobbying campaign and finally convinced Congress ro fund a rescue-chis rime under rhe direcrion of rhe Navy. H enrietta, a clever and determined woman, also persuaded Congress ro pose a $25,000 reward for the parry's recoverythus creating a competition between the navy and the Arctic whali ng fleets, which immediately prepared to sail north. The relief operatio n cost ten times more than the original expedition and was put under the command of one of the navy's most competent officers, Commander Winfield Scott Schley. H e organized a fleet of ships: the former steam whalers Thetis and Bear and the British naval vessel Alert, which had been on the Nares expedition in 1875 and had been donated to the United States by Q ueen Victoria. Unwilling to risk the humiliation of having the whalers be the first to reach Greely, Schley departed New York on 23 April 1884. His fleet raced north and by 20 June 1884 landed on the Greenland shore directl y across from Cape Sabine. Eager to proceed north to Fort Conger, Schley thought it prudent to ar lease look for messages and leave a cache ar Cape Sabine. On the afternoon of 22 June, the Thetis led the fleer across the srrai r unaware char Greely and his men were nearby. Antici patin g that none of his parry The cairn found on Stalnecht Island by Schley's men proved to be key to Greely's rescue. Greely had his men leave their records and directions to their location there the previous fall. To make it more conspicuous, they placed the brass pendulum they had used to take gravity measurements protruding out of the top

(above) Commander Schley and Lt. Colwell stand beside the ragged tent at "Camp Clay" where Greely and six of his men were found barely alive. Ensign Charles H arlow was determined to take the photo despite driving wind and rain, 22 June 1884. (below) The rescue ship Theris struggles in a gale while awaiting the boarding of the survivors.

mighr survive, Greely h ad o rdered the precious records of their scientific work be placed in a cairn on a tiny islet off the coas t. Ir was chis cairn thar members of Schley's crew fou nd, along wirh a nore written 2 1 Ocrober 1883, starin g rhe location of Greely's camp. Fearing that the parry could not possibly have survived rhe winter, Schley recalled his m en wirh three blasts on th e ships whistle, and they proceeded aro und the Cape in a rising gale. While Schley's men battled the storm y sea, Greely's sem i-comarose men in rheir co ll apsed tent were roused by a

strange sound mixed wi th rhe whis tlin g gale. Hoping agai nst hope and barely able to move, the most able of th e men struggled ro the shore ro raise an improvised signal Bag ar the very momenr rhe Bear's steam launch, Cub came aro und rhe point. Their long ordeal was fin ally over. The survivo rs were quickly brought on board the Thetis, and the Bear's crew derailed ro search rhe camp sire for remains of rhe dead and any ocher records. The m en were appalled ro find char ar lease six of the bodies had been stripped of their flesh-obvious evidence of cannibalism. For the rest of rheir lives, however, none 17