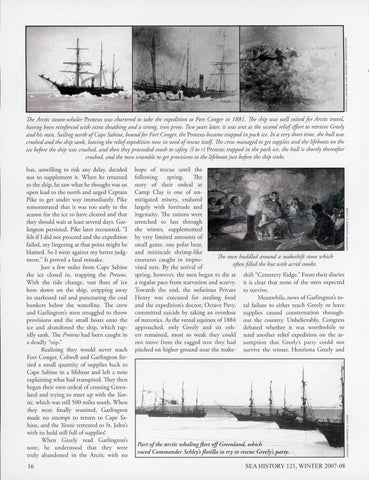 The Arctic steam-whaler Proteus was chartered to take the expedition to Fort Conger in 1881. The ship was well suited for Arctic travel, having been reinforced with extra sheathing and a strong, iron prow. Two years later, it was sent as the second relief effort to retrieve Greely and his men. Sailing north of Cape Sabine, boundfor Fort Conger, the Proteus became trapped in pack ice. In a very short time, the hull was crushed and the ship sank, leaving the relief expedition now in need of rescue itself The crew managed to get supplies and the lifeboats on the ice before the ship was crushed, and then they proceeded south to safety. (l to r) Proteus trapped in the pack ice, the hull is shortly thereafter crushed, and the men scramble to get provisions to the lifeboats just before the ship sinks.

but, unwilling to risk any delay, decided not to supplement it. When he returned to the ship, he saw what he thought was an open lead to the north and urged Captain Pike to get under way immediately. Pike remonstrated that it was too early in the season for the ice to have cleared and that they should wait at least several days. Garlington persisted. Pike later recounted, "I felt ifI did not proceed and the expedition fai led , my lingering at that point might be blam ed. So I went against my better judgment." It proved a fatal mistake. Just a few miles from Cape Sabine the ice closed in, trapping the Proteus. With the tide change, vast flo es of ice bore down on the ship, stripping away its starboard rail and puncturing the coal bunkers below the waterline. The crew and Ga rlington's men struggled to throw provisions and the sm all boats onto the ice and abandoned the ship, which rapidly sank. The Proteus had been caugh t in a deadly "nip." Realizing they would never reach Fort Co nger, Colwell and Garlington ferried a small quantity of supplies back to Cape Sabine in a lifeboat and left a note explaining what had transpired. They then began their own ordeal of crossing Greenland and trying to meet up with the Yantic, which was still 500 miles so uth. When they were fin ally reunited, Garli ngton made no attempt to return to Cape Sabine, and the Yantic retreated to St. John's with its hold still full of supplies! When G reely read Garlington's note, he understood that they were truly abandoned in the Arctic with no

hope of rescue until the fo llowing spring. The story of their ordeal at Camp C lay is one of unmitigated misery, endured largely with fo rtitude and ingenui ty. The ra tions were stretched to last through the winter, supplem ented by very limited amo unts of small gam e, one polar bear, and miniscule shrimp-like The men huddled around a makeshift stove which creatures caught in improoften filled the hut with acrid smoke. vised nets. By the arrival of spring, however, the men began to die at shift "Cemetery Ridge." From their diaries a regular pace from starvation and scurvy. it is clear that none of the m en expected Towards the end, the nefarious Private to survive. Meanwhile, news of Garlingto n's toHenry was executed for stealing food and the expedition's doctor, Octave Pavy, tal failure to ei ther reach Greely or leave committed suicide by taking an overdose supplies caused consternation throughof narcotics. As the vernal equinox of 1884 out the country. Unbelievably, Congress approached, only Greely and six oth- debated whether it was worthwhile to ers remained, most so weak they could send another relief expedition on the asno t move from the ragged tent they had sumption that Greely's pany could not pitched on higher gro und near the make- survive the winter. Henrietta Greely and

Part of the arctic whaling fleet off Greenland,- which-- - raced Commander Schley's flotilla to try to rescue Greely's party.