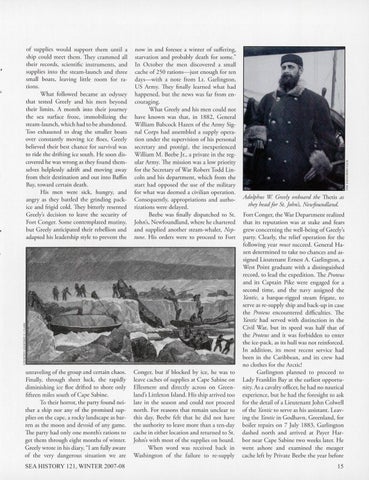 of supplies would support them until a ship could meet them. They crammed all their records, scientific instruments, and supplies into the steam -launch and three small boats, leaving little room for rations. What followed became an odyssey that tested Greely and his men beyond their limits. A month into their journey the sea surface froze, immobilizing the steam-launch, which had to be abandoned. Too exhausted to drag the smaller boats over constantly moving ice floes, G reely believed their best chance for survival was to ride the drifting ice south. H e soon discovered he was wrong as they found themselves helplessly adrift and moving away from their destination and out into Baffin Bay, toward certain death. His men were sick, hungry, and angry as they battled the grinding packice and frigid cold. They bitterly resented Greely's decisio n to leave the security of Fort Conger. Some contemplated mutiny, but Greely anticipated their rebellion and adapted his leadership style to prevent the

now in and foresee a winter of suffering, starvation and probably death for some." In October the men discovered a small cache of 25 0 rations-just enough for ten days-with a note from Lt. Garlington, US Army. They fin ally learned what had happened, but the news was far from encouraging. What Greely and his men could not have known was that, in 1882, General William Babcock H azen of the Army Signal Corps had assembled a supply operation under the supervision of his personal secretary and protege, the inexperienced William M. Beebe Jr., a private in the regular Army. The mission was a low priority for the Secretary of War Robert Todd Lincoln and his department, which from the start had opposed the use of the military for what was deemed a civilian operation. Co nsequently, appropriations and authorizations were delayed. Beebe was finally dispatched to St. John's, Newfoundland, where he chartered and supplied another steam-whaler, Neptune. His orders were to proceed to Fort

unraveling of the group and certain chaos. Finally, through sheer luck, the rapidly diminishing ice floe drifted to shore only fifteen miles south of Cape Sabine. To their horror, the party found neither a ship nor any of the promised supplies on the cape, a rocky landscape as barren as the moon and devoid of any game. The party had only one month's rations to get them through eight months of w inter. Greely wrote in his diary, "I am fully aware of the very dangerous situation we are

Conger, but if blocked by ice, he was to leave caches of supplies at Cape Sabine on Ellesmere and directly across on Greenland's Littleton Island . His ship arrived too late in the season and could not proceed north. For reasons that remain unclear to this day, Beebe felt that he did not have the authority to leave more than a ten-day cache in eith er location and returned to St. John's with m ost of the supplies on board. When word was received back in Washington of the failure to re-supply

Adolphus W Greely onboard the Thetis as they head for St. john's, Newfoundland. Fort Conger, the War Department realized that its reputation was at stake and fears grew concerning the well-being of Greely's party. C learly, the relief operation for the following year must succeed. General H azen determined to take no chances and assigned Lieutenant Ernest A. Garlington, a West Point graduate with a distinguished record, to lead the expedition. The Proteus and its Captain Pike were engaged for a second time, and the navy assigned the Yantic, a barque-rigged steam frigate, to serve as re-supply ship and back-up in case the Proteus encountered difficulties. The Yantic had served with distinction in the C ivil War, but its speed was half that of th e Proteus and it was forbidden to enter the ice-pack, as its hull was not reinforced. In addition, its most recent service had been in the Caribbean, and its crew had no clothes for the Arctic! Garlington planned to proceed to Lady Franklin Bay at the earliest opportuni ty. As a cavalry officer, he had no nautical experience, but he had the foresight to ask for the detail of a Lieutenant John Colwell of the Yantic to serve as his assistant. Leaving the Yantic in Godhavn, Greenland, for boiler repairs on 7 July 1883, Garlington dashed north and arrived at Payer Harbor near Cape Sabine rwo weeks later. He went ashore and examined the m eager cache left by Private Beebe the year before