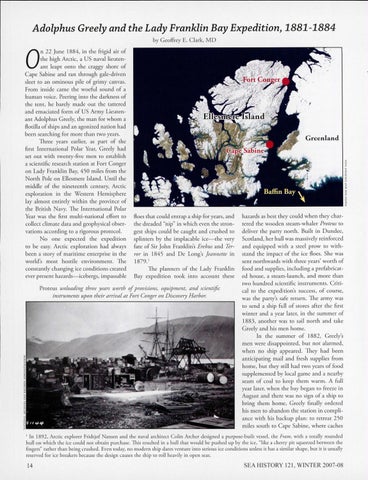 Adolphus Greely and the Lady Franklin Bay Expedition, 1881-1884 by Geoffrey E. Clark, MD n 22 June 1884, in the fri gid air of the high Arctic, a US naval lieutenant leapt onto the craggy shore of Cape Sabine and ran through gale-driven sleet to an ominous pile of grimy canvas. From inside cam e the woeful sound of a human voice. Peering into the darkness of the tent, he barely made out the tattered and emaciated form of U S Army Lieutenant Adolphus G reely, the m an for whom a flotilla of ships and an agonized nation had been searching for mo re than rwo years. Three years earlier, as part of the first International Polar Year, Greely had set out with rwenty-five men to establish a scientific research station at Fort Conger on Lady Franklin Bay, 450 miles from the No rth Pole on Ellesm ere Island. Until the middle of the nineteenth century, Arctic exploration in the Western Hemisphere lay almost entirely within the province of the British Navy. The International Polar Year was the first multi-national effort to collect climate data and geophysical observations according to a rigorous protocol. N o one expected the expedition to be easy. Arctic exploration had always been a story of m aritime enterprise in the world&#39;s most hostile environment. The constantly changing ice conditions created ever present hazards-icebergs, impassable

floes that could entrap a ship for years, and the dreaded &quot;nip&quot; in which even the stronges t ships could be caught and crushed to splinters by the implacable ice-the very fate of Sir John Franklin&#39;s Erebus and Terror in 1845 and D e Long&#39;s Jeannette in 1879. 1 The planners of the Lady Franklin Bay expedition took into account these

Proteus unloading three years worth of p rovisions, equipment, and scientific instruments upon their arrival at Fo rt Conger on D iscovery Harbor.

hazards as best they could when they chartered the wooden steam-whaler Proteus to deliver the party north. Built in Dundee, Sco tland, her hull was massively reinforced and equipped with a steel prow to withstand the impact of the ice fl oes . She was sent northwards with three years&#39; wo rth of fo od and supplies, including a prefabricated house, a steam-launch , and more than rwo hundred scientific instruments. C ritical to the exped ition&#39;s success, of course, was the party&#39;s safe return. The army was to send a ship full of sto res after the first winter and a year later, in the summer of 1883, anoth er was to sail north and take Greely and his men ho me. In the summer of 1882, G reely&#39;s men were disappointed, but not alarmed, when no ship appeared . They had been anticipating mail and fresh supplies from home, but they still had rwo yea rs of foo d supplemented by local gam e and a nearby seam of coal to keep them warm. A full year later, when the bay began to freeze in August and there was no sign of a ship to bring them home, G reely fin ally ordered his m en to abandon the station in complian ce with his backup plan: to retreat 250 miles south to Cape Sabine, where caches

1 In 1892, Arctic explorer Fridtjof Nansen and the naval architect Colin Archer designed a purpose-built vessel, the Fram, with a total ly rounded hull on which the ice could not obtain purchase. This resulted in a hull that wo uld be pushed up by the ice, &quot;like a cherry pit squeezed berween the fin gers&quot; rather than being crushed. Even today, no modern ship dares ve nture into serious ice condi tions unless it has a similar shape, but it is usually reserved for ice breakers because the design causes the ship to roll heavily in open seas.