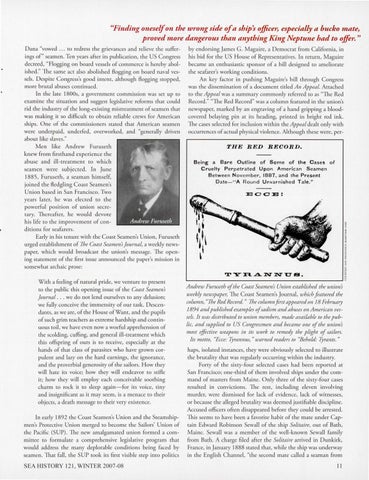 ''Finding oneselfon the wrong side ofa ship's officer, especially a bucko mate, proved more dangerous than anything King Neptune had to offer. " D ana "vowed . .. to redress the grievances and relieve the sufferings of" seam en . Ten years after its publi cation, the US Congress decreed, "Flogging on board vessels of commerce is hereby abolished ." The same act also abolished flogging on board naval vessels. Despite Co ngress's good intent, although flogging stopped, more brutal abuses continued. In the late 1800s, a government comm ission was set u p to examine the situation and suggest legislative refo rms that could rid the industry of the long-existing mistreatment of seam en that was making it so difficult to obtain reliable crews for American ships. On e of the commiss io ners stated that American seam en were underpaid, underfed, overwo rked, and "generally driven about like slaves." M en like Andrew Furuserh knew from firsthand experience the abuse and ill -treatment to which seamen we re subj ected . In June 1885, Furuserh, a seam an himself, joined the fl edgling C oas t Seam en's Union based in San Francisco. Two years later, h e was elected to rhe powerful position of unio n secretary. Thereafter, he wo uld devote his life to the improve ment of co nditions for seafarers. Early in his tenure with the C oas t Seam en's Union, Furuseth urged establishment of The Coast Seamen's journal, a weekly newspaper, which would broadcast the union's message. The opening statement of the first issue announced the paper's miss io n in somewhat archaic prose: With a feeling of natural pride, we ve nture to present to rhe public this opening issue of the Coast Seamen's j ournal . . . we do nor lend ourselves to any delusion; we fully conceive the imm ensity of our tas k. Descendants, as we are, of the House of Want, and the pupils of such grim teachers as extreme hardship and continuous toil, we have even now a woeful apprehension of the scolding, cuffing, and general ill-treatment which this offspring of ours is to receive, especially at the hands of that class of parasites who have grown co rpulent and lazy on the hard earnings, th e ignorance, and the proverbial generosity of the sai lors. H ow they will hare its voice; how th ey will endeavor to stifle it; how they will employ each conceivable soothing charm to rock it to sleep again- for its voice, tiny and insignificam as it m ay seem , is a menace to their obj ects, a death message to their ve ry existence. In early 1892 the Coas t Seam en's Unio n and the Steam shipmen's Pro tective Union m erged to becom e the Sailors' U nio n of the Pacific (S UP). The new amalgamated union fo rmed a com mittee to formulate a comprehensive legislative program that wo uld address the m any deplo rable conditi o ns being faced by seam en. Thar fall, the SUP too k its first visible step in to politics S EA HISTORY 12 1, WINTER 2007-08

by endorsing Jam es G. Maguire, a D emocrat from California, in his bid for rhe U S H o use of Representatives . In return, Maguire became an enthusias tic spo nsor of a bill designed to am eliorate the seafarer's working conditions. An key fac tor in pushing M aguire's bill thro ugh Congress was the disseminacio n of a document tided An Appeal. Attached to the Appeal was a summary commonly referred to as "The Red Reco rd ." "Th e Red Record" was a column feamred in the union's newspaper, marked by an engraving of a hand gripping a bloodcovered belaying pin at its heading, printed in bright red ink. The cases selected for inclusion within the Appeal dealt o nly with occurrences of actual physical violence. Although these were, per-

THE BED BECORD. Being a Bare Outline of Âˇsome of the Cases of Cruelty Perpetrated Upon American Seamen Between Nove mber, 1887, and the Present Date-"A Round Unvarnished Tale." ECCE!

Andrew Furuseth ofthe Coast Seamen's Union established the union's weekly newspaper, The Coast Seam en's Journal, which featured the column, "The Red Record. " The column first appeared on 18 February 189 4 and published examples ofsadism and abuses on American vessels. It was distributed to union members, made available to the public, and supplied to US Congressmen and became one of the union's most effective weapons in its work to remedy the plight of sailors. Its motto, "Ecce: Tyrannus, "warned readers to "Behold: Tyrants. "

haps, isolated instances, they were obviously selected to illustrate the brutality that was regularly occurring within the industry. Forty of the sixty-four selected cases had been reported at San Francisco; one-third of them involved ships under th e com mand of masters from M aine. Only three of the sixty-four cases resulted in convictions. The rest, including eleven involving murder, were dismissed fo r lack of evidence, lack of witnesses, o r because the alleged brutality was deem ed justifiable discipline. Accused officers often disappeared before they could be arrested . This seem s to have been a favo rite habit of the mate under C aptain Edward Robinson Sewall of the ship Solitaire, out of Bath, Maine. Sewall was a mem ber of the well-known Sewall family fro m Bath. A charge filed afte r the Solitaire arrived in Dunkirk, France, in January 1888 stated that, while the ship was underway in the English C hannel, "rhe second mare called a seam an from