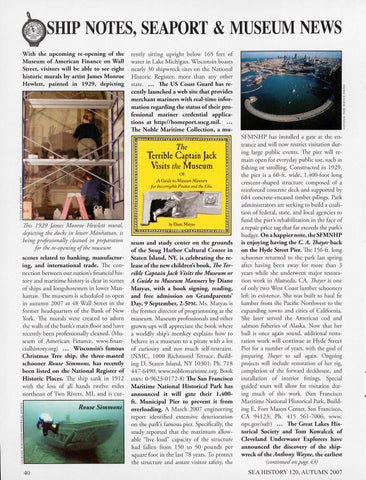 SIDP NOTES, SEAPORT &amp; MUSEUM NEWS With the upcoming re-opening of the Museum of American Finance on Wall Street, visitors will be able to see eight historic murals by artist James Monroe Hewlett, painted in 1929, depicting

rendy sitting up right below 165 feet of water in Lake M ichigan . Wisconsin boas ts nearly 30 shipwreck sires on rhe National Historic Register, more than any other state. . . . The US Coast Guard has recently launched a web site that provides merchant mariners with real-time information regarding the status of their professional mariner credential applications at http: //homeport.uscg.mil. The Noble Maritime Collection, a mu-

A Guide to Museum Manners for Incorrigible Pirates and the Like.

This 1929 James Monroe H ewlett mural, depicting the docks in lower Manhattan, is being professionally cleaned in preparation for the re-opening of the museum scenes related to banking, manufacturing, and international trade. Th e connection between our nation&#39;s financial history and maritime history is clear in scenes of ships and longshorem en in lower Manhattan. 1he museum is scheduled to open in autumn 2007 at 48 Wall Street in the former headquarters of rhe Bank of New York. The murals were created to adorn the walls of rhe bank&#39;s main Boor and have recently been professionally cleaned. (Museum of American Finance, www. financialhistory.org) . . . Wisconsin&#39;s famous Christmas Tree ship, the three-masted schooner Rouse Simmons, has recently been listed on the National Register of Historic Places. TI1e ship sank in 1912 with the loss of all hands twelve miles northeast of Two Rivers, MI, and is cur-

seum and study center on the grounds of the Snug Harbor Cultural Center in Staten Island, NY, is celebrating the release of the new children&#39;s book, &#39;Ihe Ter-

rible Captain jack Visits the Museum or A Guide to Museum Manners by Diane Matyas, with a book signing, reading, and free admission on Grandparents&#39; Day, 9 September, 2-SPM. Ms. Matyas is rhe former director of programming at the museum . Museum professionals and other grown-ups will appreciate the book where a worldly ship&#39;s monkey explains how to behave in a museum to a pirate with a lor of curiosity and nor much self-restraint. (NMC, 1000 Richmond Terrace, Building D , Staten Island, NY 10301 ; Ph. 718 447-6490; www. noblemaririme.org. Book ISBN: 0-9623-0172-8) The San Francisco Maritime National Historical Park has announced it will gate their 1,400ft. Municipal Pier to prevent it from overloading. A M arch 2007 engineering report identified extensive deterioration on the park&#39;s famous pier. Specifically, the study reported that the maximum allowable &quot;live load&quot; capacity of the structure had fallen from 150 to 50 pounds per square foo t in the last 78 years. To protect rhe structure and ass ure visitor safety, the

SFMNHP has installed a gate at rhe entrance and will now restrict visitation during large public events. TI1e pier will remain open for everyday public use, such as fishin g or strolling. Constructed in 1929, the pier is a 60-fr. wide, 1,400-foo r long crescent-shaped structure composed of a reinforced concrete deck and supported by 684 concrete-encased timber pilings. Park administrators &#39;are seeking to build a coalition of federal, state, and local agencies to fund the pier&#39;s rehabilitation in rhe face of a repair price rag rhar far exceeds the park&#39;s budget. On a happier note, the SFMNHP is enjoying having the C. A. &#39;Ihayer back on the Hyde Street Pier. The 156-fr. long schooner returned to the park last spring after having been away for more than 3 years while she underwent major restoration wo rk in Alameda, CA. Thayer is one of only two West Coast lumber schooners lefr in existence. Sh e was built to haul fir lumber from rhe Pacific Northwest to the expanding towns and cities of California. She later served the American cod and salmon fisheries of Alaska. Now that her hull is once again sound, additional restoration wo rk will continue at Hyde Street Pier fo r a number of years, with the goal of preparing Thayer to sail again. Ongoing projects will include restoration of her rig, com pletion of the forward deckhouse, and installation of interior fittings. Special guided tours will allow for visitation during much of this work. (San Francisco Maritime Natio nal Histo rical Park, Building E, Fort Mason Center, San Francisco, CA 94 123; Ph. 4 15 561-7006; WWW. nps.gov/safr) . . . The Great Lakes Historical Society and Tom Kowalczk of Cleveland Underwater Explorers have announced the discovery of the shipwreck of the Anthony Wflyne, the earliest (continued on page 43) SEA HISTORY 120, AUTUMN 2007