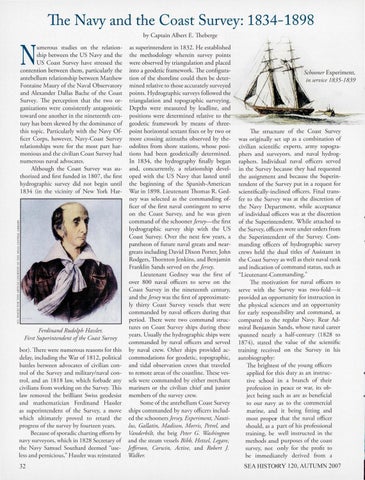 umerous studies on the relationship between the US Navy and the US Coast Survey have stressed the contention between them, particularly the antebellum relationship between Matthew Fontaine Maury of the Naval Observatory and Alexander Dallas Bache of the Coast Survey. The perception that the two organizations were consistently antago nistic toward one another in the nineteenth century has been skewed by the dominance of this topic. Particularly with the Navy Officer Corps, however, Navy-Coast Survey relationships were for the most part harm onious and the civilian Coast Survey had numerous naval advocates. Although the Coast Survey was authorized and first funded in 1807, the first hydrographic survey did not begin until 1834 (in the viciniry of New York Har-

as superintendent in 1832. H e established the m ethodology wherein survey points were observed by triangulation and placed into a geodetic framework. The configuraSchooner Experiment, tion of the shoreline co uld then be deterin service 1835-1839 mined relative to those accurately surveyed points. Hydrographic surveys followed the triangulation and topographic surveying. Depths were measured by leadline, and positions were determined relative to rhe:--..o..,;;:.&gt;&lt;&#39;&quot;:::~..., geodetic framework by means of threepoint horizontal sextant fixes or by two or The structure of the Coast Survey more crossing azimuths observed by the- was originally set up as a combination of odolites from shore stations, whose posi- civilian scientifi c experts, army topogrations had been geodetically determined. phers and surveyors, and naval hydtogIn 1834, the hydrography finally began raphers. Individu al naval officers served and, concurrently, a relationship develin the Survey because they had requested oped with the US Navy that lasted until the assignment and because the Superinthe beginning of the Spanish-American tendent of rhe Survey put in a request for War in 1898. Lieutenant Thomas R. Ged- scientifically-i ncli ned officers. Final transney was selected as the comm anding of- fer to rhe Survey was at the discretion of ficer of the first naval contingent to serve rhe Navy Department, while acceptance on the Coast Survey, and he was given of individual officers was at the discretion command of the schooner j ersey--th e first of the Superintendent. While attached to the Survey, officers were under orders from hydrographic survey ship with the US Coast Survey. Over the next few years, a the Superintendent of the Survey. Compantheon of future naval greats and near- m anding officers of hydrographic survey grears including D avid Dixon Porter, John crews held the dual rides of Assistant in Rod gers, Thornton Jenkins, and Benjamin the Coast Survey as well as their naval rank Franklin Sands served on the jersey. and indication of command status, such as Lieutenant Gedney was the first of &quot;Lieutenant-Comm anding.&quot; over 800 naval officers to serve on the The motivatio n for naval officers to Coast Survey in the nineteenth century, serve with the Survey was two-fold-it and the jersey was the first of approximate- provided an opportunity for instruction in ly thirty Coast Survey vessels that were the physical sciences and an o pportuniry commanded by naval officers during that for early responsibility and command, as period. There were two co mmand struc- compared to the regular Navy. Rear Adtures on Coast Survey ships during these miral Benjamin San ds, whose naval career Ferdinand Rudolph H assler, years. Usually the hydrographic ships were spanned nearly a half-century (1828 to First Superintendent ofthe Coast Survey 1874), stated the val ue of the scientific commanded by naval officers and served training received on the Survey in his bor). There were numerous reasons for this by naval crew. Other ships provided acdelay, including the War of 18 12, political co mmodations for geodetic, topographic, autobiography: battles between advocates of civilian co n- and tidal observation crews that traveled The brightest of the yo ung officers appli ed for this duty as an instructrol of the Survey and military/naval con- to remote areas of the coastline. Th ese vestrol , and an 18 18 law, which forbade any sels were commanded by either merchant tive school in a branch of their civilians from working on the Survey. This m ariners or the civilian chief and junior professio n in peace or war, its oblaw removed the brilliant Swiss geodes isr m embers of the survey crew. ject being such as are as beneficial and m athematician Ferdinand Hassler Some of the antebellum Coast Survey to our navy as to the comm ercial marine, and it being fitting and as superintendent of the Survey, a move ships commanded by navy officers includwhich ultimately proved to retard rhe ed the schooners jersey, Experiment, Nautimost propeir that the naval officer lus, Gallatin, Madison, Morris, Petrel, and progress of the survey by fourteen years. should, as a part of his profess ional Because of sporadic charting efforts by Vanderbilt, the brig Peter G. Washington training, be well instructed in the navy surveyo rs, which in 1828 Secretary of and the steam vessels Bibb, Hetzel, Legare, methods ancd purposes of the coast the Navy Sam uel Southard deemed &quot;use- Jefferson, Corwin, Active, and Robert ]. survey, nor o nly for the profit to less and pernicious,&#39;&#39; H assler was reinstated Walker. be immedicately derived from a 32