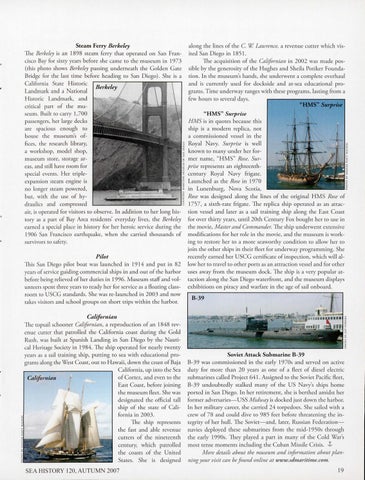 Steam Ferry Berkeley The Berkeley is an 1898 steam fe rry that operated on San Francisco Bay for sixty years before she came to the museum in 1973 (this photo shows Berkeley passing underneath the Golden Ga te Bridge fo r the last time before h eadin g to San Diego). She is a California Stare Historic Landmark and a National H istoric Landmark, and critical part of the museum . Built to carry 1,700 passengers, her large decks are spacious enough to house the museum&#39;s offices, the research library, a wo rkshop, model shop, m useum store, storage areas, and still have room fo r special events. H er tripleexpansion steam engine is no longer steam powered, bur, with the use of hydraulics and compressed ai r, is operated for visitors to observe. In addition to her long history as a part of Bay Area residents&#39; everyday lives, the Berkeley earned a special place in history for her heroic service during the 1906 San Francisco earthquake, when she carried thousands of survivo rs to safety.

Pilot This San D iego pilot boar was launched in 191 4 and put in 82 years of service guiding comm ercial ships in and our of th e harbor before being relieved of her duties in 1996. Museum staff and volunteers spem three years to ready her fo r service as a floating classroom to USCG standards. She was re-launched in 2003 and now takes visito rs and school groups on short crips within the harbor.

along the lines of the C. W Lawrence, a revenue cutter which visited San Diego in 185 1. The acquisition of the Californian in 2002 was m ade possible by the generosity of the Hughes and Sheila Potiker Foundation. In the museum&#39;s hands, she underwent a complete overhaul and is currently used for dockside and at-sea educational programs. T ime underway ranges with these program s, las ting from a few ho urs to several days.

&quot;HMS&quot; Surprise HMS is in quotes because this ship is a m odern replica, nor a commissioned vessel in the Royal Navy. Surprise is well know n to many under her form er nam e, &quot;HMS&quot; Rose. Surprise represents an eighteenrhcentury Royal Navy fri gate. Launched as the Rose in 1970 in Lunenburg, Nova Scotia, Rose was des igned along the lines of the original H MS Rose of 1757, a sixth-rate fri gate. The replica ship operated as an attaction vessel and later as a sail training ship along the East Coast fo r over thirty years, until 20th Century Fox bought her to use in the movie, Master and Commander. The ship underwent extensive modifications for her role in the movie, and the museum is wo rking to restore her to a more seaworthy condition to allow her to join the other ships in their fleer for underway p rogramming. She recently earned her U SCG certificate of inspection, which will allow her to travel to other ports as an attractio n vessel and fo r other uses away from the museum dock. The shi p is a very popular arracrion along the San Diego wa terfront, and the museum displays exhibi tions on piracy and warfa re in the age of sail onboard.

Californian The topsail schooner Californian, a reproduction of an 1848 revenue cutter that patrolled the Cali fo rnia coast during the Gold Rush, was buil t at Spanish Landing in San Diego by the Nautical H eritage Society in 1984. The ship operated fo r nearly twenty years as a sail training ship, putting to sea with educational programs along rhe West Coas t, our to H awaii, down the coast of Baja California, up into the Sea Californian of Cortez, and even to the East Coas t, before joining the museum fleer. She was designated th e official tall ship of the state of Califo rnia in 2003. Th e ship represents the fast and able revenue cutters of th e nineteenth century, which patrolled the coasts of the United States. She is designed SEA HI STORY 120, AU TUMN 2007

Soviet Attack Submarine B-39 B-39 was commiss ioned in the early 1970s and served o n active duty fo r more than 20 years as one of a fleer of diesel electric submarines called Project 64 1. Assigned to the Soviet Pacific flee r, B-39 undo ubtedly stalked m any of the US Navy&#39;s ships home ported in San Diego. In her retirem ent, she is berthed am idst her fo rmer adve rsaries-U SS M idway is docked just down rhe harb or. In her mili tary career, she carried 24 torpedoes . She sailed with a crew of 78 and could dive to 98 5 feet before th rea teni ng the integri ty of her hull. The Soviet-and, later, Russian Federationnavies deployed these subm arines from the mid- l 950s thro ugh the early 1990s. They played a part in many of the Cold War&#39;s most tense moments including the C uban Miss ile C risis. ,t More details about the museum and information about planning your visit can be found online at www. sdmaritime.com. 19