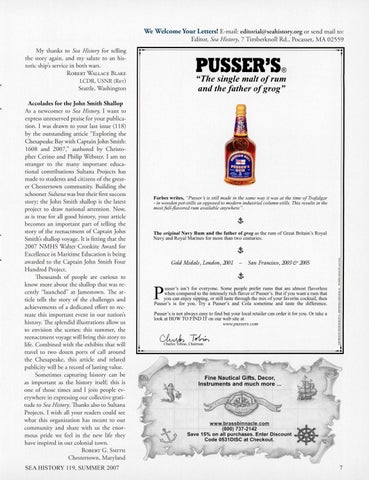 We Welcome Your Letters! E-mail: editorial@seahistory.org or send mail to: Editor, Sea History, 7 T imberknoll Rd. , Pocasset, MA 02559 My thanks to Sea History for telling the story again, and my salute to an histo ric ship&#39;s service in both wars.

Accolades for the John Smith Shallop As a newcomer to Sea History, I want to express unreserved praise for yo ur publication . I was drawn to yo ur last issue (118) by the outstanding article &quot;Exploring the C hesapeake Bay with Captain John Smith : 1608 and 2007,&quot; authored by Christopher Cerino and Philip Webster. I am no stranger to the m any important educatio nal contributions Sultana Projects has made to studen ts and citizens of the greater C hestertown communi ty. Building the schooner Sultana was but their first success story; the John Smith shallop is the lates t p roject to d raw national attention . Now, as is true for all good history, yo ur article becomes an important part of telling the story of the reenactment of Captain John Smith&#39;s shallop voyage. Ir is fitting that the 2007 NMHS Walter Cronkite Award for Excellence in Maritime Educatio n is being awarded to the Captain John Smith Four Hundred Project. Thousands of people are curious to know more abo ut the shallo p that was recently &quot;launched&quot; at Jamesrown. The article tells the story of the challenges and achievements of a dedicated effo rt to recreate this important event in o ur nation&#39;s history. The splendid illustrations allow us to envision the scenes; this summer, the reenactment voyage will bring this srory ro life. Co mbined with the exhibits that will travel to two dozen ports of call aro und the C hesapeake, this article and related publicity will be a record of las ting value. Sometimes capturing history can be as impo rtant as the history itself; this is one of those times and I jo in people everywhere in expressing our collective gratitude to Sea History. Thanks also to Sultana Projects. I wish all yo ur readers could see what this o rganization has m eant to our communi ty and share with us the enormous pride we feel in the new life they have inspired in our colo nial town. ROBERT G. SMITH C hestertown, Maryland SEA HISTORY 11 9, SUMMER 2007

and the fath er ofgrog&quot;

Forbes writes, &quot;Pusser s is still made in the same way it was at the time of Trafalgar - in wooden pot-stills as opposed to modern industrial column-stills. This results in the most fidl-jlavo red rum available anywhere &quot;.

The original Navy Rum and the father of grog as the rum of Great Britain &#39;s Royal Navy and Royal Marines for more than two centuries.

usser&#39;s isn&#39;t for everyone. Some people prefer rums that are almost flavorless when compared to the intensely rich flavor of Pusser&#39;s. But if you want a rum that you can enj oy sipping, or still taste through the mix of your favorite cocktail, then Pusser&#39;s is for you. Try a Pusser&#39;s and Cola sometime and taste the difference.

Pusser &#39;s is not always easy to find but your loca l reta il er can order it for you. Or take a look at HOW TO FIN D IT on our web site at www.pussers.com