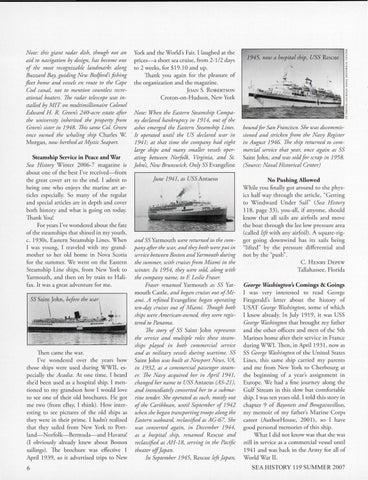 Note: this giant radar dish, though not an York and the World&#39;s Fair. I laughed at the aid to navigation by design, has become one prices-a shorr sea cruise, from 2-1/2 days of the most recognizable landmarks alo ng to 2 weeks, for $ 19. 10 and up. Buzzard Bay, guiding N ew Bedford&#39;s fishing Thank yo u again fo r rhe pleasure of fleet home and vessels en route to the Cape the organization and rhe magazine. Cod canal, not to mention countless recreJ oAN S. RO BERTSON ational boaters. The radar telescop e was inC roton-o n-Hudson, N ew York stalled by M I T on multimillionaire Colonel Edward H. R. Green&#39;s 240-acre estate after N ote: When the Eastern Steamship Company declared bankruptcy in 19 14, out of the the university inherited the property from Green&#39;s sister in 1948. This same Col. Green ashes emerged the Eastern Steamship Lines. once owned the whaling ship C harles W Âˇ It operated until the US declared war in Morgan, now berthed at Mystic Seaport. 194 1; at that time the company had eight large ships and many smaller vessels operating between N orfolk, Virginia, and St. Steamship Service in Peace and War Sea H istory Winter 2006-7 magazine is john&#39;s, New Brunswick. Only SS Evangeline about one of the best I&#39;ve received- from June 1941, as USS Antaeus the great cover art to the end . I admit to being one who enjoys rhe marine art articles especially. So many of rhe regular and special articles are in depth and cover both history and what is going on today. Thank You! For years I&#39;ve wondered about the fate of rhe steamships that shined in m y youth, c. 1930s, Eastern Steamship Lines . When and SS Yarmouth were returned to the comI was yo ung, I traveled wirh my grand- pany after the war, and they both were p ut in mother to her old home in N ova Sco tia service between Boston and Yarmou th during for the summer. We went on rhe Eastern the summer, with cruises from Miami in the Steamship Line ships, from New York to winter. In 1954, they were sold, along with Yarmouth, and then on by train to Hali- the company name, to F Leslie Fraser. fax . It was a great adventure for me. Fraser renamed Yarmouth as SS Yarmouth Castle, and began cruises out ofMiami. A refitted Evangeline began op erating ten-day cruises out of Miami. Though both ships were American-owned, they were registered to Panama. The story of SS Saint John represents the service and multiple roles these steamships p layed in both commercial service Then came rhe war. and as military vessels during wartime. SS I&#39;ve wondered over rhe years how Saint John was built at Newport News, VA, those ships were used during WWII, es- in 1932, as a commercial passenger steampecially rhe A cadia. Ar one rime, I heard er. The Navy acquired her in April 194 1, she&#39;d been used as a hospital ship. I men- changed her name to USS Antaeus (AS-21), tioned to my grandson how I would love and immediately converted her to a submato see one of their old brochures. He gor rine tender. She operated as such, mostly out me rwo (from eBay, I rhink). How inter- of the Caribbean, until September of 1942 esting ro see pictures of rhe old ships as when she began transporting troops along the rhey were in rheir prime. I hadn&#39;t realized Eastern seaboard, reclassified as AG-67. She rhar rhey sailed from New York to Port- was converted again, in D ecember 1944, land-N orfolk-Bermuda-and H avana! as a hospital ship, renamed Rescue and (I obviously already knew about Boston reclassified as A H-1 8, serving in the Pacific sailin gs). The brochure was effective 1 theater offj apan. In September 1945, Rescue left Jap an, April 1939, so ir advertised trips ro New

boundfor San Francisco. She was decommissioned and stricken from the Navy Register in August 1946 The ship returned to commercial service that year, once again as SS Saint John, and was sold fo r scrap in 1958. (Source: Naval H istorical Center)

No Pushing Allowed While yo u fin ally gor around ro the physics half way th ro ugh rhe article, &quot;Getting to W indwa rd Under Sail&quot; (Sea H istory 11 8, page 33), yo u-all, if anyo n e, should know rhat all sails are airfoils and move rhe boat through rhe lee low pressure area (called li.ftwirh any airfoil). A squ are- rigger going downwind has irs sails bein g &quot;lifted&quot; by rhe press ure differential and not by rhe &quot;push&quot;.

Tallahassee, Florida George Washington&#39;s Comings &amp; Goings I was very inrerested to read Geo rge Fitzgerald&#39;s letter about the history of USAT George Washington, some of which I knew already. In July 1919 , it was USS George Washington that brought my fa ther and the other officers and men of the 5th Marines home after their service in France during WWI. Then, in April 193 1, now as SS George Washington of rhe U nited Stares Lines, this same ship carried m y parents and me from New York to C h erbourg ar rhe beginnin g of a year&#39;s assignment in Europe. We had a fine journey along the Gulf Stream in this slow but comfortable ship. I was ten yea rs old. I told this story in chapter 9 of Bayonets and Bougainvilleas, my memoir of my fa ther&#39;s Marine Corps career (AurhorHouse, 2001 ), so I have good personal memories of rhis ship. Whar I did nor know was that she was still in service as a commercial vessel until 194 1 and was back in the Army for all of World War II.