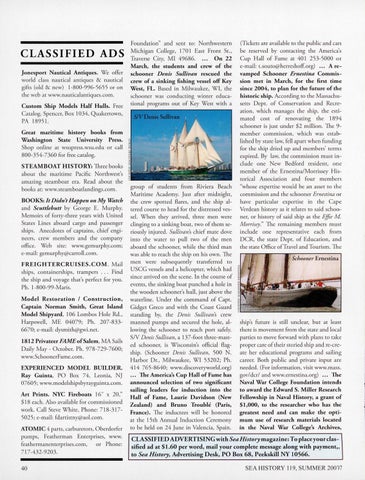 Foundation&quot; and sent to: Northwestern Michigan College, 1701 East Front St., Traverse City, MI 49686. On 22 March, the students and crew of the schooner Denis Sullivan rescued the crew of a sinking fishing vessel off Key West, FL. Based in Milwaukee, WI, the schooner was co nducting winter educational programs out of Key West with a

gro up of students from Riviera Beach M aritime Academy. Just after midnight, the crew spotted flares, and the ship altered course to head for the distressed vessel. When they arrived, three men were clinging to a sinking boat, two of them seriously injured. Sullivan&#39;s chief mate dove into the water to pull two of the men aboard the schooner, while the third man was able to reach the ship on his own. The men were subsequently transferred to USCG vessels and a helicopter, which had since arrived on the scene. In the course of events, the sinking boat punched a hole in the wooden schooner&#39;s hull, just above the waterline. U nder the command of Capt. G idget Greco and with the Coast Guard standing by, the Denis Sullivan&#39;s crew manned pumps and secured the hole, allowing the schooner to reach port safely. S/V Denis Sullivan, a 137-foo t three-mas ted schooner, is Wisco nsin&#39;s official fl agship. (Schooner Denis Sullivan, 500 N. H arbor Dr. , Milwaukee, WI 53202; Ph. 4 14 765 -8640; www.discoveryworld.org) . . . The America&#39;s Cup Hall of Fame has announced selection of two significant sailing leaders for induction into the Hall of Fame, Laurie Davidson (New Zealand) and Bruno Trouble (Paris, France). 1he inductees will be honored at the 15th Annual Induction Ceremony to be held on 24 June in Valencia, Spain.

(Tickets are available to the public and can be reserved by co ntacting the America&#39;s Cup Hall of Fame at 40 1 253-5000 or e-mail: t.souto@herreshoff.org) . . . A revamped Schooner Ernestina Commission met in March, for the first time since 2004, to plan for the future of th,e historic ship. According to the Massachusetts D ept. of Conservation and Recreation, which manages the ship, the estnmated cost of renovating the 1894 schooner is just under $2 m illion. The 9member commission, which was established by state law, fell apart when funding for the ship dried up and members&#39; terms expired. By law, the commission must iruclude one New Bedford resident, one member of the Ernestina/Mo rrissey Historical Association and four members &quot;whose expertise wo uld be an asset to the commission and the schooner Ernestina o r have particular expertise in the Cape Verdean histo ry as it relates to said schooner, or history of said ship as the Effie M Morrisey.&quot; The remaining members must include one representative each from D C R, the state D ept. of Education, and the state Office ofTravel and To urism. The

ship&#39;s future is still unclear, but at least there is movement from the state and local parties to move forward with plans to take proper care of their storied ship and re-create her educational programs and sailing career. Both public and private input are needed . (For information, visit www.mass. gov/dcr/ and www.ernestina.org) ... The Naval War College Foundation intends to award the Edward S. Miller Research Fellowship in Naval History, a grant of $1,000, to the researcher who has the greatest need and can make the optimum use of research materials located in the Naval War College&#39;s Archives,