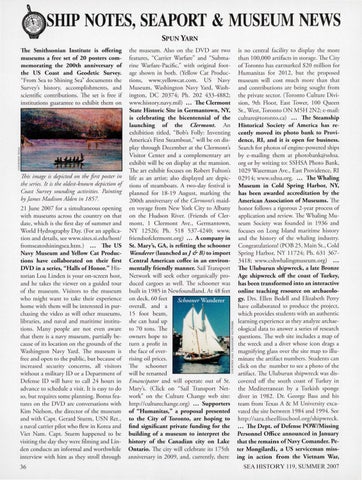 The Smithsonian Institute is offering museums a free set of 20 posters commemorating the 200th anniversary of the US Coast and Geodetic Survey. &quot;From Sea to Shining Sea&quot; documents the Survey&#39;s history, accomplishments, and scientific co ntributions. The set is free if institutions guarantee to exh ibit them on

the museum. Also o n the DVD are two features, &quot;Carrier Warfare&quot; and &quot;Submarine Warfare-Pacific,&quot; with original footage shown in both. (Yell ow Cat Productions, www.yellowcat.com. US Navy Museum, Washington Navy Yard, Washington, DC 20374; Ph. 202 433-4882; www. history.navy.mil) ... The Clermont State Historic Site in Germantown, NY, is celebrating the bicentennial of the launching of the Clermont. An exhibition tided, &quot;Bob&#39;s Folly: Inventing America&#39;s First Steamboat,&quot; will be on display through December at the Clermont&#39;s Visitor Center and a complementary art exhibit will be on display at the mansion. The art exhibit focuses on Robert Fulton&#39;s This image is depicted on the first poster in life as an artist; also displayed are depicthe series. It is the oldest-known depiction of tions of steamboats. A two-day festival is Coast Survey sounding activities. Painting planned for 18- 19 August, marking the by James Madison Alden in 1851. 200th anniversary of the Clermont&#39;s m aid2 1 June 2007 for a simultaneo us opening en voyage from New York C ity to Albany with museums across the country on that o n the Hudson River. (Friends of Clermont, 1 C lermont Ave., Germantown, date, which is the first day of summer and World Hydrography Day. (For an applica- NY 12526; Ph . 518 537-4240; WWW. tio n and details, see www.sites.si.edu/host/ friendsofclermont.org) ... A company in fromseatoshiningsea.htm.) The US St. Mary&#39;s, GA, is refitting the schooner Wanderer (launched as] &amp; BJ to import Navy Museum and Yellow Cat Productions have collaborated on their first Central American coffee in an environDVD in a series, &quot;Halls of Honor.&quot; His- mentally friendly manner. Sail Transport torian Lou Linden is yo ur on-screen host, Network will seek other organically proand he takes the viewer on a guided tour duced cargoes as well. The schooner was of the museum. Visitors to the museum built in 1985 in Newfo undland. At 48 feet who might want to take their experience on deck, 60 feet hom e with them will be interested in pur- overall, and a chasing the video as will other museums, 15 foot beam , libraries, and naval and maritime institu- she can haul up tio ns. Many people are not even aware to 70 tons. The that there is a navy museum, par tiall y be- owners hope to cause of its location on the grounds of the turn a profit in Was hington Navy Yard. The museum is the face of everfree and open to the public, but because of rising oil prices. increased securi ty concerns, all visitors The schooner with out a military ID or a Department of will be renamed D efense ID will have to call 24 hours in Emancipator and wi ll operate out of St. advance to schedule a visit. It is easy to do Mary&#39;s. (Click on &quot;Sail Transport Netso, but requires some planning. Bonus fea- work&quot; on the C ulture C hange web site: tures on the DVD are conversations with h ttp: //culturechange.org) ... Supporters Kim N ielso n, the director of the museum of &quot;Humanitas,&quot; a proposal presented and with Capt. Gerard Sturm, USN Ret., to the City of Toronto, are hoping to a naval carrier pilot who flew in Korea and find significant private funding for the Viet Nam. Capt. Sturm happened to be building of a museum to interpret the visiting th e day they were filming and Lin- history of the Canadian city on Lake den co nducts an informal and worthwhile Ontario. The city will celebrate its l 75 th interview with him as they stroll through anniversary in 2009, and, currently, there 36

is no cen tral facility to display the more than 100,000 artifacts in storage. The City ofToronto has earmarked $20 million for Humani tas fo r 2012 , but the proposed museum wi ll cost much more than that and contributions are being sought from the private sector. (Toronto Culture Division, 9th Floo r, East Tower, 100 Queen St., West, Toronto ON M5H 2N2; e-mail: culture@toronto.ca) ... The Steamship Historical Society of America has recently moved its photo bank to Providence, RI, and it is open for business. Search for photos of engine-powered ships by e-mailing them at photobank@sshsa. org or by writing to: SSHSA Photo Bank, 1029 Waterman Ave., East Providence, RI 0291 4; www.ss hsa.o rg .... The Whaling Museum in Cold Spring Harbor, NY, has been awarded accreditation by the American Association of Museums. The honor follows a rigorous 2-year process of applicatio n and review. The Whaling Museum Society was fo unded in 1936 and focus es on Long Island maritime history and the histo ry of the whaling industry. Congratulatio ns! (POB 25, Main St. , Cold Spring H arbo r, NY 11 724; Ph. 631 36734 18; www.cshwhalingmuseum.org) The Uluburun shipwreck, a late Bronze Age shipwreck off the coast of Turkey, has been transformed into an interactive online teaching resource on archaeology. Ors. Ellen Bedell and Elizabeth Perry have collaborated to produce the proj ect, which provides students with an authenti c learning experience as they analyze archaeological data to answer a series of research questio ns. The web site includes a map of the wreck and a diver whose ico n drags a magnifying glass over the site map to illuminate the artifact numbers . Students can click on the number to see a photo of the artifact. The U luburun shipwreck was discovered off the south coast of Turkey in the Mediterranean by a Turkish sponge diver in 1982. Dr. Geo rge Bass and his team from Texas A &amp; M University excavated the site between 1984 and 1994. See http: // sara. theell isschool.org/ shipwreck. . . . The Dept. of Defense POW/Missing Personnel Office announced in January that the remains of Navy Comander. Peter Mongilardi, a US serviceman missing in action from the Vietnam War, SEA HISTORY 119, SUMMER 2007