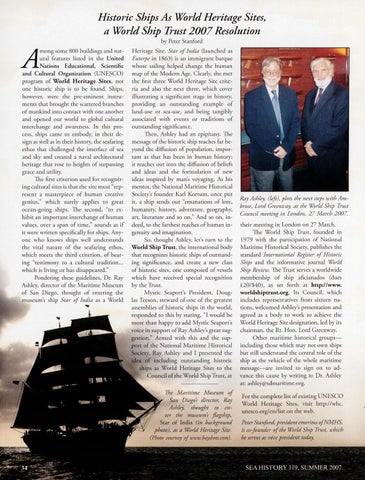 mong some 800 buildings and natural features listed in the Un ited Nations Educational, Scien tific and Cultural Organization (UNESCO) program of World Heritage Sites, not one historic ship is to be found. Ships, however, were the pre-eminent instrum ents that brought the scattered branches of mankind into contact with one another and opened our wo rld to global cultural interchange and awa reness. In this process, ships came to embody, in their design as well as in their history, the seafaring ethos that challenged the interface of sea and sky and created a naval architectural heritage that rose to heights of surpassing grace and utility. The first criterion used for recognizing cultural sites is that the site must &quot;represent a masterpiece of human creative geni us,&quot; which surely applies to great ocean-going ships. The second, &quot;to exhibit an important interchange of human values, over a span of ti m e,&quot; so unds as if it were written specifically for ships. Anyone who knows ships well understands the vital natu re of the seafaring ethos, which m eets the third criterion, of bearing &quot;tes timo ny to a cultural tradition .. . which is living or has disappeared.&quot; Pondering these guidelines, Dr. Ray Ashley, director of the Maritime Museum of San Di ego, thought of entering the museum&#39;s ship Star of India as a World ~

Heritage Site. Star of India (laun ched as Euterpe in 1863) is an immigrant barque whose sailing helped change the human map of the Modern Age. Clearly, she m et the first three World Heritage Site criteria and also the next three, which cover illustrating a significant stage in hi story, providing an outstanding example of land-use or sea-use, and being tangibly associated with events or traditions of outstanding significance. Then, As hley had an epipha ny. The message of the historic ship reaches far beyond the diffusion of population, important as that has been in human history; it reaches out into the diffusio n of beliefs and ideas and the formulation of new ideas inspired by man&#39;s voyaging. As his mentor, the National Maritime Historical Society&#39;s founder Karl Kortum, once put it, a ship sends out &quot;emanations of lore, humanity, history, adventure, geography, art, literature and so o n.&quot; And so on, indeed, to the farthest reaches of human ingenuity and imagination . So, tho ught Ashley, let&#39;s turn to the W orld Ship Trust , the international body that recognizes historic ships of outstanding significance, and create a new class of histo ric sites, one composed of vessels which h ave received special recognition by the Trust. Mystic Seaport&#39;s President, Douglas Teeson, steward of one of the greatest assemb li es of historic ships in the world, responded to this by stating, &quot;I wo uld be more than happy to add Mystic Seaport&#39;s voice in support of Ray Ashley&#39;s great suggestion.&quot; Armed with this and the support of the National Maritime Historical Society, Ray Ashley and I presented the ea of including outstanding historic sh ips as World Heritage Sites to the Council of the World Sh ip Trust, at

Ray A shley, (left), plots the next steps with Ambrose, Lord Greenway, at the World Ship Trust Council meeting in London, 27 March 2 007. their meeting in London on 27 March. The World Ship Trust, fo unded in 1979 with the participation of National Maritime Historical Society, publishes the standard International Register of H istoric Ships and the informative journal World Ship Review. The Trust serves a worldwide membership of ship aficianados (dues ÂŁ20/$40), as set forth at http://www. worldshiptrust.o rg. Its Co uncil, which includes representatives from sixteen nations, welcomed Ashley&#39;s presentation and agreed as a body to wo rk to achieve the World H eritage Site designation, led by its chairman , the Rt. Hon. Lord Greenway. Other maritime historical groupsincluding those which may not own ships but still understand the central role of the ship as the vehicle of the whole maritime m essage-are invited to sign on to advance this cause by writing to Dr. Ashley at: as hley@sdmaritime.org. For the complete list of existing UNESCO World Heritage Sites, visit http: //whc. unesco.org/en/list on the web.

Peter Stanford, president emeritus ofNMHS, is co-founder of the World Ship Trust, which he serves as vice president today.