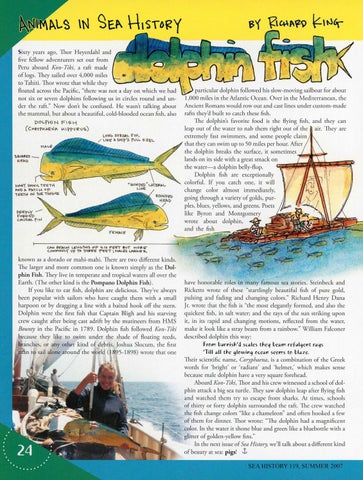 Sixty years ago, Thor H eyerdahl and five fellow adventurers set out from Peru aboard Kon-Tiki, a raft made of logs . They sailed over 4,000 miles to Tahiti. Thor wrote that while they Boated across the Pacific, "there was not a day on which we had not six or seven dolphins following us in circles round and under the raft." Now don't be confused. He wasn't talking about the mammal, but about a beautiful, co ld-blooded ocean fish, also POL.PHI N F\SI-\ (Coy.'(~141>.\:i.J"" 1-1\~f' ll R\J-.,) /

particular dolphin followed his slow-moving sailboat for about 1,000 miles in the Atlantic Ocean. Over in the Mediterranean, the Ancient Romans would row out and cast lines under custom-made rafts they'd built to catch these fish. Th e dolphin's favorite food is the Hying fish, and they can leap out of the water to nab them right out of the air. They are extremely fast swimmers, and some people claim that they can swim up to 50 miles per hour. After the dolphin breaks the surface, it sometimes -¢.=!ii~~f"'

lands on its side with a great smack on:~i!@l~·~~-~~g~~ the water-a dolphin belly-Bop. (,j Dolphin fish are exceptionally colorful. If yo u catch one, it will change color almost immediately, going through a variety of golds, purples, blues, yellows, and greens. Poets like Byron and Montgomery wrote about dolphin, and the fish - -L.&.M::ar-:liflll ..._____..--:;

known as a dorado or mahi-mahi. There are two different kinds. The larger and more common one is known simply as the Dolphin Fish. They live in temperate and tropical waters all over the Earth. (The other kind is the Pompano Dolphin Fish). If yo u like to eat fish, dolphin are delicious. They've always been popular with sailors who have caught them with a small harpoon or by dragging a line with a baited hook off the stern. Dolphin were the first fish that Captain Bligh and his starving crew caught after being cast adrift by the mutineers from HMS Bounty in the Pacific in 1789. Dolphin fish followed Kon-Tiki because they like to swim under the shade of floating reeds, branches, or any other kind of debris. Joshua Slocum, the first n to sail alone around the wo rld (1 ~f 5-1898) wrote that one

have honorable roles in many famous sea stories. Steinbeck and Ricketts wrote of these "startlingly beautiful fish of pure gold, pulsing and fading and changing colors." Richard H enry Dana Jr. wrote that the fish is "the most elegantly formed, and also the quickest fish , in salt water; and the rays of the sun striking upon it, in its rapid and changing motions, reflected from the water, make it look like a stray beam from a rainbow." William Falconer described dolphin this way:

words for 'bright' or 'radiant' and 'helmet,' which makes sense because male dolphin have a very square forehead. Aboard Kon-Tiki, Thor and his crew witnessed a school of dolphin arrack a big sea turtle. They saw dolphin leap after Hying fish and watched them try to escape from sharks. At times, schools of thirty or forty dolphin surrounded the raft. The crew watched the fish change colors "like a chameleo n" and often hooked a few of them for dinner. Thor wro te: "The dolphin had a magnificent color. In the water it shone blue and green like a bluebottle with a glitter of golden-yellow fins." In the next issue of Sea History, we'll talk about a different kind of beauty at sea: pigs! ,t