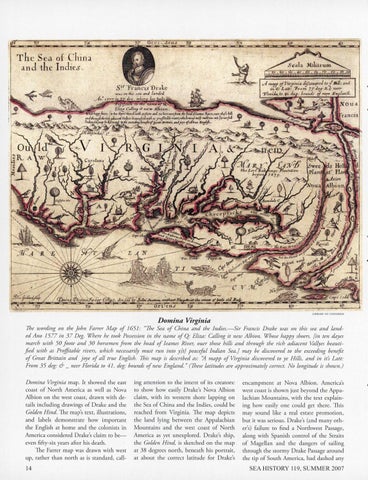 Domina Virgi.nia The wording on the john Farrer Map of 1651: &quot;The Sea of China and the Indies.-Sir Francis Drake was on this sea and landed Ano 1577 in 37 Deg. Where he took Possession in the name of Q: Eliza: Calling it new Albion. Whose happy shoers, [in ten dayes march with 50 joote and 3 0 horsemen from the head of Jeames River, ouer those hills and through the rich adiacent Vallyes beautified with as Proffitable rivers, which necessarily must run into y(t} peaceful Indian Sea.} may be discovered to the exceeding benefit of Great Brittain and Joye of all true English. This map is described as: &#39;A mapp of Virginia discovered to ye Hills, and in it&#39;s Latt: From 35 deg: &amp; _ neer Florida to 41. deg: bounds of new England.&quot; (These latitudes are approximately correct. No longitude is shown.) Domina Virginia map. It showed the east coast of North America as well as Nova Albion on the west coast, drawn with details including drawings of Drake and the Golden Hind. The map&#39;s text, illustrations, and labels demonstrate how important the English at home and the colonists in America considered Drake&#39;s claim to beeven fifty-six years after his death. The Farrer map was drawn with wes t up, rather than north as is standard, call14

ing attention to the intent of its creators: to show how easily Drake&#39;s Nova Albion claim, with its western shore lapping on the Sea of C hina and the Indies, could be reached from Virginia. The map depicts the land lying between the Appalachian Mountains and the west coast of No rth America as yet unexplored. Drake&#39;s ship, the Golden Hind, is sketched on the map at 38 degrees north, beneath his portrait, at about the correct latitude for Drake&#39;s

encampment at Nova Albion. America&#39;s west coas t is shown just beyond the Appalachian Mountains, with the text explaining how easily one could get there. This may sound like a real estate promotion, but it was serious. Drake&#39;s (and m any other&#39;s) failure to find a Northwest Passage, along with Spanish control of the Straits of Magellan and the dangers of sailing through the stormy Drake Passage around the tip of South America, had dashed any