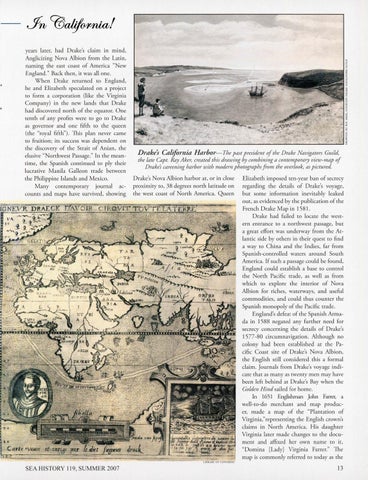 years later, had Drake&#39;s claim in mind, Anglicizing Nova Albion from the Latin, naming the east coast of America &quot;New England.&quot; Back then, it was all one. When Drake returned to England, he and Elizabeth speculated on a proj ect to form a corporation (like the Virginia Company) in the new lands that Drake had discovered north of the equator. One tenth of any profits were to go to Drake as governor and one fifth to the queen (the &quot;royal fifth&quot;). This plan never came to fruition; its success was dependent on the discovery of the Strait of Anian, the elusive &quot;Northwest Passage.&quot; In the meantime, the Spanish continued to ply their lucrative M anila Galleon trade between the Philippin e Islands and Mexico. Many contemporary journal accounts and maps have survived, showing

Drake&#39;s California Harbor-The past president of the Drake Navigators Guild, the late Capt. Ray Aker, created this drawing by combining a contemporary view-map of Drake&#39;s careening harbor with modern photographs ftom the overlook, as pictured. Drake&#39;s Nova Albion harbor at, or in close proximity to, 38 degrees north latitude on the west coast of North America. Queen

Elizabeth imposed ten-year ban of secrecy regarding the details of Drake&#39;s voyage, but some information inevitably leaked out, as evidenced by the publication of the French Drake Map in 1581. Drake had failed to locate the western entrance to a northwest passage, but a great effort was underway from the Atlantic side by others in their quest to find a way to China and the Indies, far from Spanish-controlled waters aro und South America. If such a passage could be found, England could establish a base to control the North Pacific trade, as well as from which to explore the interior of Nova Albion for riches, waterways, and useful commodities, and could thus counter the Spanish monopoly of the Pacific trade. England&#39;s defea t of the Spanish Armada in 1588 negated any further need for secrecy co ncerning the details of Drake&#39;s 1577-80 circumnavigation. Although no colony h ad been established at the Pacific Coast site of Drake&#39;s Nova Albion, the English still considered this a formal claim. Journals from Drake&#39;s voyage indicate that as many as twen ty men may have been left behind at Drake&#39;s Bay when the Golden Hind sailed fo r home. In 1651 Englishman John Farrer, a well-to-do merchant and map producer, made a map of the &quot;Plantation of Virginia,&quot; representing the English crown&#39;s claims in North America. His daughter Virginia later made changes to the document and affixed her own nam e to it, &quot;Domina [Lady] Virginia Farrer.&quot; 1he map is commonly referred to today as the