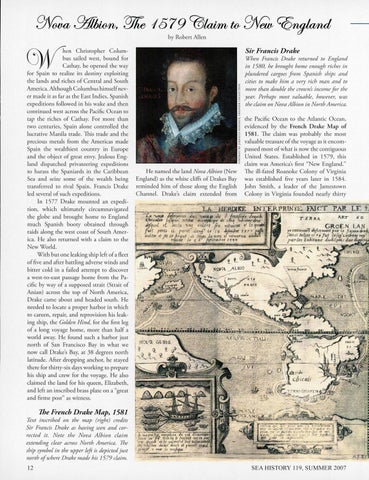 91Ga, ~. PJt; 1679 ?fiUwm w 91G,, q;~ by Robert Allen en Christopher Columus sailed west, bound for Cathay, he opened the way for Spain to reali ze its destiny exploiting the lands and riches of Central and South America. Although Columbus himself never made it as far as the East Indies, Spanish expeditions followed in his wake and then continued west across the Pacific Ocean to tap the riches of Cathay. For more than two centuries, Spain alone controlled the lucrative Manila trade. This trade and rhe precious metals from the Americas made Spain the wealthiest country in Europe and the object of great envy. Jealous England dispatched privateering expeditions to harass the Spaniards in the Caribbean Sea and seize some of the wealth being transferred to rival Spain. Francis Drake led several of such expeditions. In 1577 Drake mounted an expedition, which ultimately circumnavigated the globe and brought home to England much Spanish booty obtained through raids along the west coast of South America. He also returned with a claim to the New World. With bur one leaking ship left of a Beet of five and after battling adverse winds and bitter cold in a failed attempt to discover a west-to-east passage home from the Pacific by way of a supposed strait (Strait of Anian) across the top of North America, Drake came about and headed south. H e needed to locate a proper harbor in which to careen, repair, and reptovision his leaking ship, the Golden Hind, for rhe firs t leg of a long voyage home, more rhan half a world away. H e found such a harbor just north of San Francisco Bay in what we now call Drake&#39;s Bay, at 38 degrees no rth latitude. After dropping anchor, he stayed there for thirty-six days working to prepare his ship and crew for the voyage. H e also claimed the land for his queen, Elizabeth, and left an inscribed brass plate on a &quot;great and firme post&quot; as witness.

Sir Francis Drake When Francis Drake returned to England in 1580, he brought home enough riches in plundered cargoes from Spanish ships and z cities to make him a very rich man and to g more than double the crown&#39;s income for the ~ year. Perhaps most valuable, however, was ~ the claim on Nova Albion in North America. u z

&quot;1 the Pacific O cean to the Atlantic Ocean, evidenced by the French Drake Map of ยง 1581. The claim was probably the m ost ~ valuable treasure of rhe voyage as it encom~ passed most of what is now the contiguous ~ United States. Establish ed in 1579, this ~ claim was America&#39;s first &quot;New England.&quot; He named the 1and NovaAlbion (New The ill-fated Roanoke Colony of Virginia England) as the white cliffs of Drakes Bay was established five years later in 1584. reminded him of those along the English John Smith, a leader of the Jamesrown Channel. Drake&#39;s claim extended from Colony in Virginia founded nearly thirty i3

The French Drake Map, 1581 Text inscribed on the map (right) credits Sir Francis D rake as having seen and corrected it. Note the Nova Albion claim extending clear across North A merica. The ship symbol in the upper left is depicted just north of where D rake made his 1579 claim.