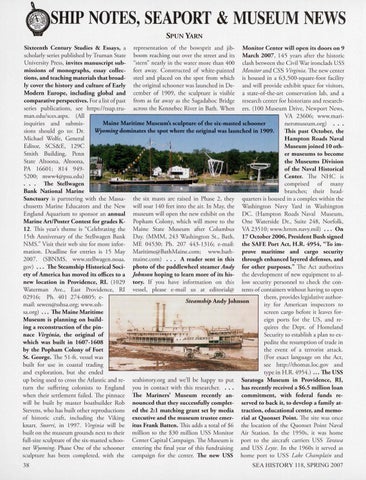 Sixteenth Century Studies &amp; Essays, a representation of the bowsprit and jib- Monitor Center will open its doors on 9 scholarly series published by Truman State boom reaching out over the street and its March 2007, 145 years after the historic University Press, invites manuscript sub- &quot;stern&quot; nearly in the water more than 400 clash between the Civil War ironclads USS missions of monographs, essay collec- feet away. Constructed of white-painted Monitor and CSS Virginia. The new center tions, and teaching materials that broad- steel and placed on the spot from which is housed in a 63,500-square-foot facili ty ly cover the history and culture of Early the original schooner was launched in De- and will provide exhibit space for visitors, Modern Europe, including global and cember of 1909, the sculpture is visible a state-of-the-arr conservation lab, and a comparative perspectives. For a list of past from as far away as the Sagadahoc Bridge research center for historians and researchseries publications, see https://tsup.tru- across the Kenn ebec River in Bath. When ers. (100 Museum Drive, Newport News, man.edu/sces.aspx. (All ....-----------------------------~ VA 23606; www.mariinqumes and sub misMaine Maritime Museum&#39;s sculpture of the six-masted schooner nersmuseum.org) sions should go to: Dr. W,.omingdominates the spot where the original was launched in 1909. This past October, the Michael Wolfe, General Hampton Roads Naval Editor, SCS&amp;E, 129C Museum joined 10 othSmith Building, Penn er museums to become State Altoona, Altoona, the Museums Division PA 16601 ; 8 14 949of the Naval Historical 5200; mww4@psu.edu) Center. The NHC is The Stellwagen comprised of many Bank National Marine branches; their headSanctuary is partnering with the M assa- the six m as ts are raised in Phase 2, they quarters is housed in a complex within the chusetts Marine Educators and the New will soar 140 feet into the air. In May, the Washington Navy Yard in Washington England Aquarium to sponsor an annual museum will open the new exhibit on the DC. (Hampton Roads Naval Museum, Marine Art/Poster Contest for grades K- Popham Colony, which will move to the One Waterside Dr., Suite 248, Norfolk, 12. This year&#39;s theme is &quot;Celebrating the Maine State M useum after Columbus VA 23510; www. hrnm.navy.mil) ... On 15th Anniversary of the Stellwagen Bank Day. (MMM, 243 Washington St., Bath, 17 October 2006, President Bush signed NMS .&quot; Visit their web site for more infor- ME 045 30; Ph. 207 443-1316; e-m ail: the SAFE Port Act, H.R. 4954, &quot;To immation . D eadline for emries is 15 May Maritime@BathMaine.com; www.bath- prove maritime and cargo security 2007. (SBNMS, www.stellwagen.noaa. maine.com) . . . A reader sent in this through enhanced layered defenses, and gov) ... The Steamship Historical Sod- photo of the paddlewheel steamer Andy for other purposes.&quot; The Act authorizes ety of America has moved its offices to a Johnson hoping to learn more of its his- the developmen t of new equipmem to alnew location in Providence, RI. (1029 tory. If yo u have information on this low security personnel to check the co nWaterman Ave., East Providence, RI vessel, please e-mail us at editorial@ tents of comainers without having to open 02916; Ph. 401 274-0805; e- ....-----------------------~ them, provides legislativeauthorSteamship Andy Johnson mail: sewen@sshsa.org; www.sshity for American inspectors to sa.org) ... The Maine Maritime screen cargo before it leaves forMuseum is planning on buildeign ports for the US, and reing a reconstruction of the pinquires the Dept. of Homeland nace Virginia, the original of Security to establish a plan to exwhich was built in 1607-1608 pedite the resumption of trade in by the Popham Colony of Fort the event of a terrorist attack. St. George. The 51-ft. vessel was (For exact language on the Act, built for use in coastal trading see http: //thomas.loc.gov and and exploration, but she ended type in H.R. 4954.) ... The USS up being used to cross the Adamic and re- seahistory.org and we&#39;ll be happy to put Saratoga Museum in Providence, RI, turn the suffering colonists to England yo u in comact with this researcher. . . . has recently received a $6.5 million loan when their settlement fai led. The pinnace The Mariners&#39; Museum recently an- commitment, with federal funds rewill be built by master boatbuilder Rob nounced that they successfully complet- served to back it, to develop a family atStevens, who has built other reproductions ed the 2:1 matching grant set by media traction, educational center, and memoof histo ric craft, including the Viking executive and the museum trustee emer- rial at Quonset Point. The site was once knarr, Snorri, in 1997. Virginia will be itus Frank Batten. This adds a total of $6 the location of the Quonset Point Naval built on the museum gro unds next to their million to the $30 million USS Monitor Air Station. In the 1950s, it was home full-size sculpture of the six-m as ted schoo- Center Capital Campaign. The Museum is port to the aircraft carriers USS Tarawa ner W)ioming. Phase One of the schooner entering the final year of this fundraising and USS Leyte. In the 1960s it served as sculpture has been completed, with the campaign for the center. The new USS home port to USS Lake Champlain and 38