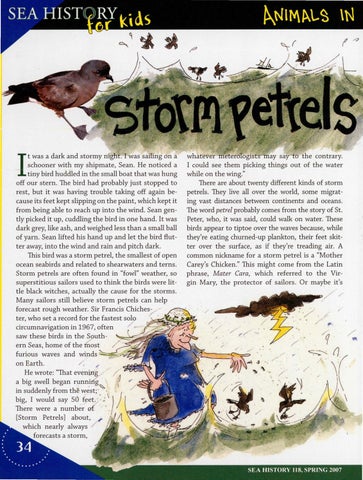 t was a dark and stormy night. I was sailing on a whatever eterologists may sa to the contrary. I could see them picking things out of the water schooner with my shipmate, Sean. He noticed a tiny bird huddled in the small boat that was hung while on the wing.&quot; off our stern. The bird had probably just stopped to There are about twenty different kinds of storm rest, but it was having trouble taking off again be- petrels. They live all over the world, some migratcause its feet kept slipping on the paint, which kept it ing vast distances between continents and oceans. from being able to reach up into the wind. Sean gen- The word petrel probably comes from the story of St. Peter, who, it was said, could walk on water. These tly picked it up, cuddling the bird in one hand. It was dark grey, like ash, and weighed less than a small ball birds appear to tiptoe over the waves because, while they&#39;re eating churned-up plankton, their feet skitof yarn. Sean lifted his hand up and let the bird flutter away, into the wind and rain and pitch dark. ter over the surface, as if they&#39;re treading air. A This bird was a storm petrel, the smallest of open common nickname for a storm petrel is a &quot;Mother ocean seabirds and related to shearwaters and terns. Carey&#39;s Chicken.&quot; This might come from the Latin Storm petrels are often found in &quot;fowl&quot; weather, so phrase, Mater Cara, which referred to the Virsuperstitious sailors used to think the birds were lit- gin Mary, the protector of sailors. Or maybe it&#39;s tle black witches, actually the cause for the storms. Many sailors still believe storm petrels can help / forecast rough weather. Sir Francis Chiches/ ~ ~ / ter, who set a record for the fastest solo &#39; · .·. · ····&#39;-circumnavigation in 1967, often / - .,... . ··,._ .. ~~~&lt;i:J saw these birds in the ~uthem Seas, home of the tllost / -furious waves and winds ·- ~..-. on Earth. /. ,, He wrote: &quot;That evening/ &#39; /,. a big swell began running . ~ (1 in suddenly from the west; , big, I would say 50 feet.;: . \ ) ) There were a number ~ I &#39;fElliillll [Storm Petrels] about, / which nearly always /