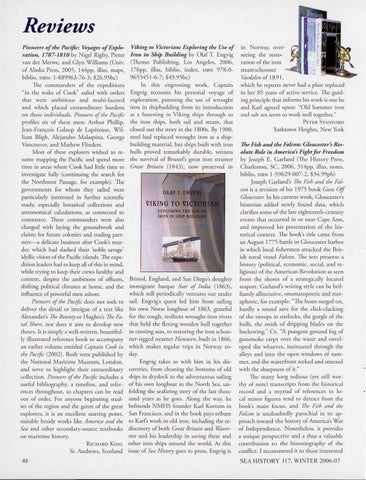 Reviews Pioneers of the Pacific: Voyages ofExplo- Viking to Victorian; Exploring the Use of ration, 1787-1810 by Nigel Rigby, Pieter Iron in Ship Building by O laf T. Engvig van der Merwe, and Glyn W illiams (Univ. of Alas ka Press, 2005 , l 44pp, illus, maps, biblio, ISBN: 1-889963-76-3; $26 .95h c) The commanders of the expeditio ns &quot;in the wake of Cook&quot; sailed with orders that we re ambitio us and multi-faceted and which placed extraordinary burdens on these individ uals . Pioneers of the Pacific profiles six of these men: Arthur Phillip, Jean-Frarn;:ois Galaup de Laperouse, W illiam Bligh, Alejandro Malaspina, George Van couver, and Mathew Flinders. Most of these explorers wished to resume mapping the Pacific and spend m ore time in areas where Cook had little time to investigate fully (continuing the search for the Northwest Passage, for example). The governments for whom they sailed were particularly interested in further scienti fic study, especially botanical collections and astronomical calculations, as connected to commerce. These commanders were also charged with laying the groundwork and claims fo r future colonies and trading partners-a delicate business after Cook&#39;s murder, which had slashed their &#39;noble savage&#39; idyllic vision of the Pacific islands. The expeditio n leaders had to keep all of this in mind, while crying ro keep their crews healthy and content, despite the ambitions of offi cers, shifting political clim ates at home, and the influence of powerful men ashore. Pioneers of the Pacific does not seek ro delive r the detail or intrigue of a text like Alexander&#39;s The Bounty or Hughes&#39;s The Fatal Shore, no r does it aim ro develop new theses. It is simply a well-wri tten, beautifully illustrated reference book ro accom pany an earlier volume entitled Captain Cook in the Pacific (2002). Both were published by the National Maritime Museum, Lo ndon, and serve ro highlight their extraordinary collectio n. Pioneers of the Pacific includes a useful bibl iography, a tim eline, and references th ro ughout, so chapters can be read out of order. For anyone beginning studies of the regio n and the genre of the great explorers, it is an excellent starting point, suitable beside wo rks like America and the Sea and other secondary-source textbooks on maritime hisrory. RICHARD Kr NG

Brisrol, England, and San Diego&#39;s do ughty immigrant barque Star of India (1 863), which still periodically ventures our under sail. Engvig&#39;s quest led him fro m sailing his own N orse longboat of 1863, grateful fo r the tough, resilient wrought-iron rive ts that held the flexing wooden hull together in cresting seas, to resto ring the iron schooner-rigged steamer H ansteen, built in 1866, which makes regular trips in Norway roday. Engvig takes us with him in his discoveries, from cleaning the bottoms of old ships in drydock to the adventuro us sailing of his own longboat in the No rth Sea, unfo lding the seafaring story of the las t thousand years as he goes. Alo ng the way, he befriends NMH S fo under Karl Kortum in San Francisco, and in the book pays tribute to Karl&#39;s work in old iro n, including the rediscovery of both Great Britain and Wivertree and his leadership in saving these and o ther iron ships aro und the wo rld. As this issue of Sea H istory goes to press, Engvig is

Norway, overseeing the restoration of the iron steam sch ooner Vaedalen of 18&#39;9 l , which he reports never had a plate replaced in her 85 years of active service. The guiding principle th at info rms his wo rk is o ne he and Karl agreed upon: &quot;O ld ham mer iron and salt sea seem to work well together.&quot; 111

The Fish and the Falcon: Gloucester&#39;s Resolute Role in America&#39;s Fight for Freedom by Joseph E. Garland (The H istory Press, C harleston, SC, 2006, 3 l 4pp, illus, notes, bibJio, ISBN 1-59629-007-2, $34.99pb) Joseph Garland&#39;s The Fish and the Falcon is a revision of his 1975 book Guns Off Gloucester. In his current work, Gloucester&#39;s historian added newly fo und data, which clarifies some of the late eighteenth-century evem s chat occurred in or near Cape An n, and improved his presentation of the historical context. 1he book&#39;s title cam e from an August 1775 battle in Gloucester harbor in which local fish ermen attacked the British naval vessel Falcon. The text presents a history (political, economic, social, and religio us) of the American Revolution as seen from the shores of a strategically located seapo rt. Garland&#39;s writing style can be brilliantly alli terative, onomatopoetic and metaphoric, for exam ple: &quot;The boats surged on, hardly a sound save fo r the click-clacking of the sweeps in oarlocks, the gurgle of the hulls, the swish of dripping blades on the backswing.&quot; Or, &#39;&#39;A pungent gro und fog of gunsmoke crept over the water and enveloped the wharves, insinuated thro ugh the alleys and into the open wi ndows of summer, and the wa terfront reeked and sneezed with the sharpness of it.&quot; The m any lo ng tedious (yet still worthy of no te) tran scripts from the historical record and a m yriad of references to local m inor figures tend to detract fro m the book&#39;s mai n foc us, and The Fish and the Falcon is unabas h edly parochial in its approach toward rhe history of America&#39;s War of Independen ce. No netheless, it provides a unique persp ecti ve and a thus a val uable contribution to the historiography of the co nflict. I recommend it to those imerested