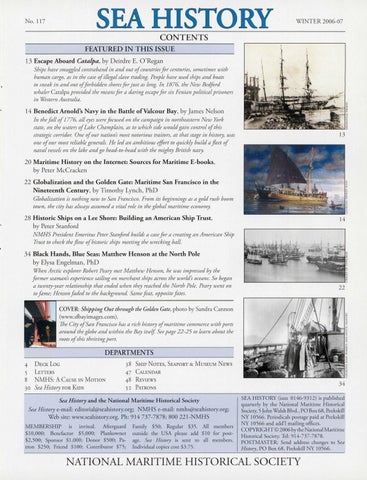 FEATURED IN THIS ISSUE 13 Escape Aboard Catalpa, by D eirdre E. O &#39;Regan Ships have smuggled contraband in and out of countries for centuries, sometimes with human cargo, as in the case ofillegal slave trading. People have used ships and boats to sneak in and out offorbidden shores for just as long. In 1876, the New Bedford whaler Catalpa provided the means for a daring escape for six Fenian political prisoners in Western Australia.

14 Benedict Arnold&#39;s Navy in the Battle ofValcour Bay, by James Nelson In the fall of 1776, all eyes were focused on the campaign in northeastern New York state, on the waters ofLake Champlain, as to which side would gain control of this strategic corridor. One of our nation&#39;s most notorious traitors, at that stage in history, was one ofour most reliable generals. H e led an ambitious effort to quickly build a fleet of naval vessels on the lake and go head-to-head with the mighty British navy.

20 Maritime History on the Internet: Sources for Maritime E-books, by Peter McCracken 22 Globalization and the Golden Gate: Maritime San Francisco in the Nineteenth Century, by T imothy Lynch, PhD Globalization is nothing new to San Francisco. From its beginnings as a gold rush boom town, the city has always assumed a vital role in the global maritime economy.

34 Black Hands, Blue Seas: Matthew Henson at the North Pole by Elysa Engelman, PhD When Arctic explorer Robert Peary met Matthew H enson, he was imp ressed by the former seaman&#39;s experience sailing on merchant ships across the world&#39;s oceans. So began a twenty-year relationship that ended when they reached the North Pole. Peary went on to fame; H enson faded to the background. Same feat, opp osite fa tes.

COVER: Sh ipp ing Out through the Golden Gate, photo by Sandra Cannon (www.sfbayimages.co m). The City ofSan Francisco has a rich history of maritime commerce with ports around the globe and within the Bay itself See page 22-25 to learn about the roots of this thriving port.