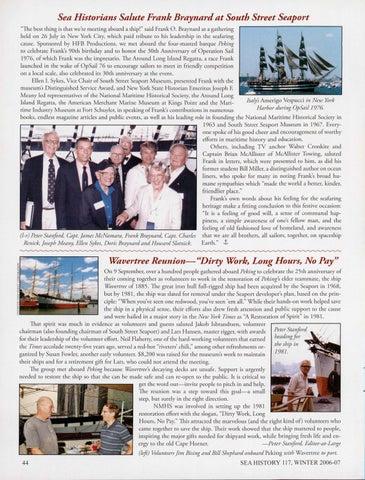 Sea Historians Salute Frank Braynard at South Street Seaport &quot;The best thing is that we&#39;re meeting aboard a ship! &quot; said Frank 0. Braynard at a gathering held on 26 July in New York C ity, which paid tribute to his leadership in the seafaring cause. Sponsored by HFB Productions, we met aboard the four-m as ted barque Peking to celebrate Frank&#39;s 90th birthday and to honor the 30th Anniversary of Operation Sail 1976, of which Frank was the impresario. The Aro und Long Island Regatta, a race Frank launched in the wake of OpSail 76 to encourage sailors to m eet in friendly competition on a local scale, also celebrated its 30th anniversary at the event. Ellen I. Sykes, Vice Chair of South Street Seaport Museum , presented Frank with the museum&#39;s Distinguished Service Award, and New York State Historian Emerims Joseph F. Meany led representatives of the National M aritime Histori cal Society, the Around Long Italy&#39;s Amerigo Vespucci in New York Island Regatta, the American Merchant M arine Museum at Ki ngs Point and the MariHarbor during OpSaiL 1976 time Industry Museum at Fort Schuyler, in speaking of Frank&#39;s contributions in numerous books, endless m agazine articles and public events, as well as his leading role in fo unding the National Maritime Historical Society in 1963 and South Street Seaport Museum in 1967. Everyone spoke of his good cheer and encouragem ent of worthy efforts in maritime history and education . Others, including T V anchor Walter Cronkite and Captain Brian McAllister of McAllister Towing, saluted Frank in letters, which were presemed to him, as did his former smdent Bill Miller, a distinguished author on ocean liners, who spoke for many in no ting Frank&#39;s broad hum ane sympathies which &quot;made the wo rld a better, kinder, friendlier place.&quot; Frank&#39;s own words about his feeling for the seafaring heritage make a finin g conclusion to this festive occasion : &quot;It is a feeling of good will, a sense of communal happin ess, a simple awareness of one&#39;s fellow man, and the feeling of old fashioned love of homeland, and awareness (L-r) Peter Stanfo rd, Capt. James McNamara, Frank Braynard, Capt. Charles that we are all brothers, all sailors, together, on spaceship Earth.&quot; .t Renick, Joseph M eany, Ellen Sykes, Doris Braynard and Howard Slotnick.

Ulavertree Reunion- &#39;&#39;Dirty Work, Long Hours, No Pay&quot; On 9 September, over a hundred people gathered aboard Peking to celebrate the 25 th anniversary of their coming together as volunteers to work in the restoration of Peking&#39;s elder teammate, the ship Wavertree of 1885. The great iron hull full-rigged ship had been acquired by the Seaport in 1968, but by 1981 , the ship was slated for removal under the Seaport developer&#39;s plan, based on the principle: &quot;When you&#39;ve seen one redwood, you&#39;ve seen &#39;em all.&quot; While their hands-on work helped save the ship in a physical sense, their efforts also drew fresh attention and public suppo rt to the cause and were hailed in a major story in the New York Times as &quot;A Restoration of Spirit&quot; in 1981. That spirit was much in evidence as volunteers and guests saluted Jakob Isbrandtsen , volunteer chairman (also founding chairman of South Street Seaport) and Lars H ansen, mas ter rigger, with awards Peter Stanford heading for for their leadership of the volunteer effort. Neil Flaherty, one of the hard-wo rking volunteers that earned the ship in the Times accolade twenty-five years ago, served a red-hot &quot;riveters&#39; chili,&quot; am ong o ther refreshments or1981. ganized by Susan Fowler, another early volunteer. $8,200 was raised for the museum&#39;s work to m aintain their ships and for a re tirem ent gift for Lars, who could not attend the m eeting. The group met aboard Peking because Wavertree&#39;s decaying decks are unsafe. Support is urgently needed to restore the ship so that she can be made safe and can re-open to the public. Ir is cri tical to get the wo rd out- invite people to pitch in and help. The reunion was a step toward this goal-a small step, but surely in the right direction. NMHS was involved in setting up the 1981 restoration effort with the slogan, &quot;Dirty Work, Long Hours, N o Pay.&quot; This attracted the marvelous (and the right kind of) volunteers who came together to save the ship. Their wo rk showed that the ship mattered to people, inspiring the major gifts needed for shipyard work, while bringing fresh life and energy to the old Cape Horner. -Peter Stanford, Editor-at-Large

(Left) Volunteers Jim Bising and Biff Shephard onboard Peking with Wavertree to port.