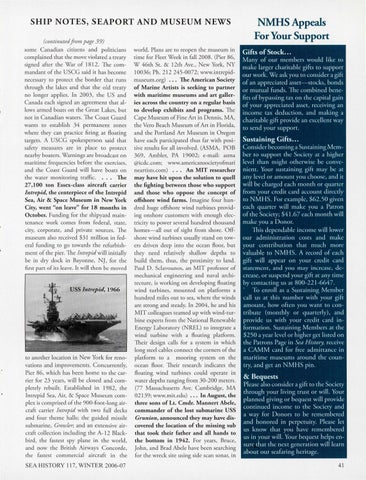 SHIP NOTES, SEAPORT AND MUSEUM NEWS (continuted from page 39) some Canadian citizens and politicians complained that the move violated a treaty signed after the War of 1812. The commandant of the USCG said it has become necessary to protect the border that runs through the lakes and that the old treaty no longer applies. In 2003, the US and Canada each signed an agreement that allows armed boats on the Great Lakes, but not in Canadian waters. The Coast Guard wants to establish 34 permanent zones where they can practice firing at floating targets. A USCG spokesperson said that safety measures are in place to protect nearby boaters. Warnings are broadcast on maritime freq uencies before the exercises, and the Coast Guard will have boats on the water monitoring traffic. . . . The 27,100 ton Essex-class aircraft carrier Intrepid, the centerpiece of the Intrepid Sea, Air &amp; Space Museum in New York City, went &quot;on leave&quot; for 18 months in October. Funding for the shipyard maintenance work comes from federal, state, city, corporate, and private sources. The muse um also received $31 million in federal funding to go towards the refurbishment of the pier. The Intrepid will initially be in dry dock in Bayonne, NJ, for the first part of its leave. It will then be moved

to another location in New York for renovations and improvements. Concurrently, Pier 86, which has been home to the carrier for 23 years, will be closed and completely rebuilt. Established in 1982, the Intrepid Sea, Air, &amp; Space M useum complex is comprised of the 900-foot-long aircraft carrier Intrepid with rwo full decks and four theme halls; the guided miss ile submarine, Growler, and an extensive aircraft collection including the A-12 Blackbird, the fastest spy plane in the world, and now the British Airways Concorde, the fastest commercial aircraft in the SEA HISTORY 117, WINTER 2006-07

world. Plans are to reopen the museum in time for Fleet Week in fall 2008. (Pier 86, W 46th St. &amp; 12th Ave., New York, NY 10036; Ph. 2 12 245-0072; www. intrepidmuseum.org) ... The American Society of Marine Artists is seeking to partner with maritime museums and art galleries across the country on a regular basis to develop exhibits and programs. The Cape Museum of Fine Art in Dennis, MA, the Vero Beach M useum of Art in Florida, and the Portland Art Museum in Oregon have each participated thus far wi th positive results for all involved. (ASMA, POB 369, Ambler, PA 19002; e-mail: asma @icdc.com; www.americansocietyofmari neartists.com) . . . An MIT researcher may have hit upon the solution to quell the fighting between those who support and those who oppose the concept of offshore wind farms. Imagine four hundred huge offshore wind turbines providing onshore customers with enough electricity to power several hundred thousand homes-all out of sight from shore. Offshore wind turbines usually stand on towers driven deep into the ocean floor, but they need relatively shallow depths to build them, thus, the proximity to land. Paul D . Sclavounos, an MIT professor of mechanical engineering and naval architecture, is working on developing floating wind turbines, mounted on platforms a hundred miles out to sea, where the winds are strong and steady. In 2004, he and his MIT colleagues teamed up with wi nd-turbine experts from the National Renewable Energy Laboratory (NREL) to integrate a wind turbine with a floating platform. Their design calls for a system in which long steel cables connect the corners of the platform to a mooring system on the ocean floor. Their research indicates the floating wind turbines could operate in water depths ranging from 30-200 meters. (77 Massachusetts Ave. Cambridge, MA 02139; www.mit.edu) ... In August, the three sons of Lt. Cmdr. Mannert Abele, commander of the lost submarine USS Grunion, announced they may have discovered the location of the missing sub that took their father and all hands to the bottom in 1942. For years, Bruce, John, and Brad Abele have been searching for the wreck site using side scan sonar, in