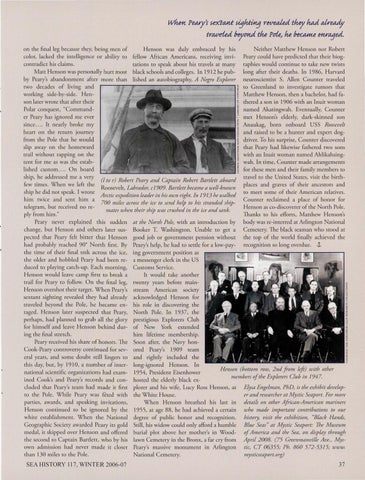 on the final leg because they, being men of Henson was duly embraced by his Neither Matthew Henson nor Robert color, lacked the intelligence or ability to fellow African Americans, receiving invi- Peary could have predicted that their biogcontradict his claims. rations to speak about his travels at many raphies would continue to take new twists Matt Henson was personally hurt most black schools and colleges. In 1912 he pub- long after their deaths. In 1986, Harvard by Peary&#39;s abandonment after more than lished an autobiography, A Negro Explorer neuroscientist S. Allen Counter traveled two decades of living and ~--------------------~ ~ to Greenland to investigate rumors that working side-by-side. Hen~ Matthew Henson, then a bachelor, had fason later wrote that after their o thered a son in 1906 with an Inuit woman Polar conquest, &quot;Command~ named Akatingwah. Eventually, Counter er Peary has ignored me ever ~ met Henson&#39;s elderly, dark-skinned son since .... It nearly broke my g Anaukag, born on board USS Roosevelt 8 and raised to be a hunter and expert dogheart on the return journey from the Pole that he would ~ driver. To his surprise, Counter discovered ~ that Peary had likewise fathered two sons slip away on the homeward trail without rapping on the ~ with an Inuit woman named Ahlikahsing~ wah. In time, Counter made arrangements tent for me as was the estabg lished custom .... On board § for these men and their family members to ship, he addressed me a very travel to the United States, visit the birth(/ tor) Robert Peary and Captain Robert Bartlett aboard few times. When we left the places and graves of their ancestors and Roosevelt, Labrador, cl 909. Bartlett became a well-known to meet some of their American relatives. ship he did not speak. I wrote Arctic expedition leader in his own right. In 1913 he walked him twice and sent him a Counter reclaimed a place of honor for 700 miles across the ice to send help to his stranded shipHenson as co-discoverer of the North Pole. telegram, but received no remates when their ship was crushed in the ice and sank. ply from him.&quot; Thanks to his efforts, Matthew Henson&#39;s Peary never explained this sudden at the North Pole, with an introduction by body was re-interred at Arlington National change, but Henson and others later sus- Booker T. Washington. Unable to get a Cemetery. The black seaman who stood at peered that Peary felt bitter that Henson good job or government pension without the top of the world finally achieved the had probably reached 90° North first. By Peary&#39;s help, he had to settle for a low-pay- recognition so long overdue. ..t the time of their final trek across the ice, ing government position as the older and hobbled Peary had been re- a messenger clerk in the US duced to playing catch-up. Each morning, Customs Service. Henson would leave camp first to break a It would take another trail for Peary to follow. On the final leg, twenty years before mainHenson overshot their target. When Peary&#39;s stream American society sextant sighting revealed they had already acknowledged Henson for traveled beyond the Pole, he became en- his role in discovering the raged. Henson later suspected that Peary, North Pole. In 1937, the perhaps, had planned to grab all the glory prestigious Explorers Club for himself and leave Henson behind dur- of New York extended ing the final stretch. him lifetime membership. Peary received his share of honors. The Soon after, the Navy honCook-Peary controversy continued for sev- ored Peary&#39;s 1909 team eral years, and some doubt still lingers to and rightly included the this day, but, by 1910, a number of inter- long-ignored Henson. In Henson (bottom row, 2nd from left) with other national scientific organizations had exam- 1954, President Eisenhower members of the Explorers Club in 1947. ined Cook&#39;s and Peary&#39;s records and con- hosted the elderly black excluded that Peary&#39;s team had made it first plorer and his wife, Lucy Ross Henson, at Elysa Engelman, PhD, is the exhibit developto the Pole. While Peary was feted with the White House. er and researcher at Mystic Seaport. For more parties, awards, and speaking invitations, When Henson breathed his last in details on other African-American mariners Henson continued to be ignored by the 1955, at age 88, he had achieved a certain who made important contributions to our white establishment. When the National degree of public honor and recognition. history, visit the exhibition, &quot;Black Hands, Geographic Society awarded Peary its gold Still, his widow could only afford a humble Blue Seas&quot; at Mystic Seaport: The Museum medal, it skipped over Henson and offered burial plot above her mother&#39;s in Wood- of America and the Sea, on display through the second to Captain Bartlett, who by his lawn Cemetery in the Bronx, a far cry from April 2008. (75 Greenmanville Ave., Mysown admission had never made it closer Peary&#39;s massive monument in Arlington tic, CT 06355; Ph. 860 572-5315; www. than 130 miles to the Pole. National Cemetery. mysticseaport. org)