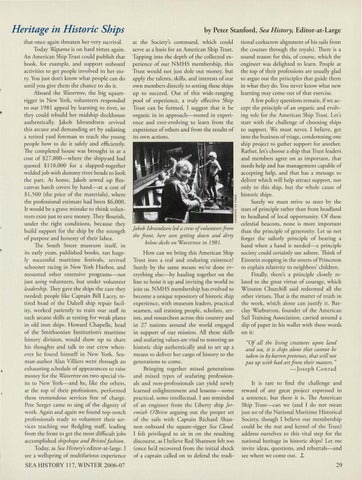 Heritage in Historic Ships that once again threaten her very survival. Today Wapama is on hard times again. An American Ship Trust could publish that book, for example, and support onboard activities to get people involved in her story. You just don&#39;t know what people can do until you give them the chance to do it. Aboard the Wavertree, the big squarerigger in New York, volunteers responded to our 1981 appeal by learning to rivet, so they could rebuild her midship deckhouse authentically. Jakob Isbrandtsen revived this arcane and demanding art by enlisting a retired yard foreman to teach the young people how to do it safely and efficiently. The completed house was brought in at a cost of $27,000-where the shipyard had quoted $110,000 for a slapped-together welded job with dummy rivet heads to look the part. At home, Jakob sewed up flaxcanvas hatch covers by hand-at a cost of $1,500 (the price of the materials), where the professional estimate had been $6,000. It would be a grave mistake to think volunteers exist just to save money. They flourish, under the right conditions, because they build support for the ship by the strength of purpose and honesty of their labor. The South Street museum itself, in its early years, published books, ran hugely successful maritime festivals, revived schooner racing in New York Harbor, and mounted other extensive programs-not just using volunteers, but under volunteer leadership. They gave the ships the care they needed; people like Captain Bill Lacey, retired head of the Dalzell ship repair facility, worked patiently to train our staff in such arcane skills as testing for wealc plates in old iron ships. Howard Chapelle, head of the Smithsonian Institution&#39;s maritime history division, would show up to share his thoughts and talk to our crew whenever he found himself in New York. Seaman-author Alan Villiers went through an exhausting schedule of appearances to raise money for the Wavertree on two special visits to New York-and he, like the others, at the top of their professions, performed these tremendous services free of charge. Pete Seeger came to sing of the dignity of work. Again and again we found top-notch professionals ready to volunteer their services teaching our fledgling staff, leading from the front to get the most difficult jobs accomplished shipshape and Bristol fashion. Today, as Sea History&#39;s editor-at-large. I see a wellspring of multifarious experience

by Peter Stanford, Sea History, Editor-at-Large at the Society&#39;s command, which could serve as a basis for an American Ship Trust. Tapping into the depth of the collected experience of our NMHS membership, this Trust would not just dole out money, but apply the talents, skills, and interests of our own members directly to setting these ships up to succeed. Out of this wide-ranging pool of experience, a truly effective Ship Trust can be formed. I suggest that it be organic in its approach-rooted in experience and ever-evolving to learn from the experience of others and from the results of its own actions.

Jakob Isbrandtsen led a crew ofvolunteers from the front, here seen getting down and dirty below decks on Wavertree in 1981.

How can we bring this American Ship Trust into a real and enduring existence? Surely by the same means we&#39;ve done everything else-by hauling together on the line to hoist it up and inviting the world to join us. NMHS membership has evolved ro become a unique repository of historic ship experience, with museum leaders, practical seamen, sail training people, scholars, artists, and researchers across this country and in 27 nations around the world engaged in support of our mission. All these skills and seafaring values are vital to restoring an historic ship authentically and to set up a means to deliver her cargo of history to the generations to come. Bringing together mixed generations and mixed types of seafaring professionals and non-professionals can yield newly learned enlightenment and lessons-some practical, some intellectual. I am reminded of an engineer from the Liberty ship Jeremiah O&#39;Brien arguing out the proper set of the sails with Captain Richard Shannon onboard the square-rigger Sea Cloud. I felt privileged to sit in on the resulting discourse, as I believe Red Shannon felt too (once he&#39;d recovered from the initial shock of a captain called on to defend the tradi-

tional corkscrew alignment of his sails from the courses through the royals). There is a sound reason for this, of course, which the engineer was delighted to learn. People at the top of their professions are usually glad to argue out the principles that guide them in what they do. You never know what new learning may come out of that exercise. A few policy questions remain, if we accept the principle of an organic and evolving role for the American Ship Trust. Let&#39;s start with the challenge of choosing ships to support. We must never, I believe, get into the business of triage, condemning one ship project to gather support for another. Rather, let&#39;s choose a ship that Trust leaders and members agree on as important, that needs help and has management capable of accepting help, and that has a message to deliver which will help attract support, not only to this ship, but the whole cause of historic ships. Surely we must strive to steer by the stars of principle rather than from headland to headland of local opportunity. Of these celestial beacons, none is more important than the principle of generosity. Let us not forget the sailorly principle of bearing a hand when a hand is needed-a principle society could certainly use ashore. Think of Einstein stopping in the streets of Princeton to explain relativity to neighbors&#39; children. Finally, there&#39;s a principle closely related to the great virtue of courage, which Winston Churchill said redeemed all the other virtues. That is the matter of truth in the work, which alone can justify it. Barclay Warburton, founder of the American Sail Training Association, carried around a slip of paper in his wallet with these words on it: &quot;Of all the living creatures upon land and sea, it is ships alone that cannot be taken in by barren pretenses, that will not put up with bad art from their masters. &quot; -Joseph Conrad

It is rare to find the challenge and reward of any great project expressed in a sentence, but there it is. The American Ship Trust-can we (and I do not mean just we of the National Maritime Historical Society, though I believe our membership could be the nut and kernel of the Trust) address ourselves to this vital step for the national heritage in hisroric ships? Let me invite ideas, questions, and rebuttals-and see where we come out. ,t 29