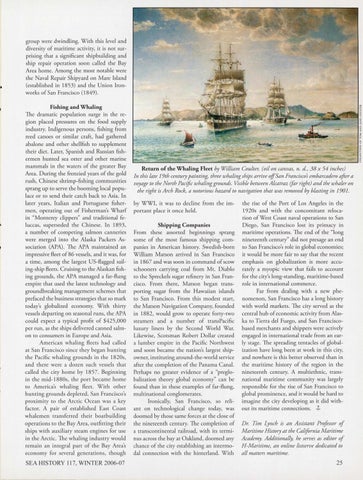 group were dwindling. With this level and diversity of maritime activity, it is not surprising that a significant shipbuilding and ship repair operation soon called the Bay Area home. Among the most notable were the Naval Repair Shipyard on Mare Island (established in 1853) and the Union Ironworks of San Francisco (1849).

Fishing and Whaling The dramatic population surge in the region placed pressures on the food supply industry. Indigenous persons, fishing from reed canoes or similar craft, had gathered abalone and other shellfish to supplement their diet. Later, Spanish and Russian fishermen hunted sea otter and other marine mammals in the waters of the greater Bay Area. During the frenzied years of the gold rush, Chinese shrimp-fishing communities sprang up to serve the booming local populace or to send their catch back to Asia. In later years, Italian and Portuguese fishermen, operating out of Fisherman&#39;s Wharf in &quot;Monterey clippers&quot; and traditional feluccas, superseded the Chinese. In 1893, a number of competing salmon canneries were merged into the Alaska Packers Association (APA). The APA maintained an impressive fleet of86 vessels, and it was, for a time, among the largest US-flagged sailing-ship fleets. Cruising to the Alaskan fishing grounds, the APA managed a far-flung empire that used the latest technology and groundbreaking management schemes that prefaced the business strategies that so mark today&#39;s globalized economy. With thirty vessels departing on seasonal runs, the APA could expect a typical profit of $425,000 per run, as the ships delivered canned salmon to consumers in Europe and Asia. American whaling fleets had called at San Francisco since they began hunting the Pacific whaling grounds in the 1820s, and there were a dozen such vessels that called the city home by 1857. Beginning in the mid-1880s, the port became home to America&#39;s whaling fleet. With other hunting grounds depleted, San Francisco&#39;s proximity to the Arctic Ocean was a key factor. A pair of established East Coast whalemen transferred their boatbuilding operations to the Bay Area, outfitting their ships with auxiliary steam engines for use in the Arctic. The whaling industry would remain an integral part of the Bay Area&#39;s economy for several generations, though

Return of the Whaling Fleet by William Coulter, (oil on canvas, n. d., 38 x 54 inches) In this late 19th century painting, three whaling ships arrive offSan Francisco&#39;s embarcadero after a voyage to the North Pacific whaling grounds. Visible between Alcatraz (far right) and the whaler on the right is Arch Rock, a notorious hazard to navigation that was removed by blasting in 1901. by WWI, it was to decline from the important place it once held.

Shipping Companies From these assorted beginnings sprang some of the most famous shipping companies in American history. Swedish-born William Matson arrived in San Francisco in 1867 and was soon in command of scow schooners carrying coal from Mt. Diablo to the Spreckels sugar refinery in San Francisco. From there, Matson began transporting sugar from the Hawaiian islands to San Francisco. From this modest start, the Matson Navigation Company, founded in 1882, would grow to operate forty-two steamers and a number of transPacific luxury liners by the Second World War. Likewise, Scotsman Robert Dollar created a lumber empire in the Pacific Northwest and soon became the nation&#39;s largest shipowner, instituting around-the-world service after the completion of the Panama Canal. Perhaps no greater evidence of a &quot;preglobalization theory global economy&quot; can be found than in these examples of far-flung, multinational conglomerates. Ironically, San Francisco, so reliant on technological change today, was doomed by those same forces at the close of the nineteenth century. The completion of a transcontinental railroad, with its terminus across the bay at Oakland, doomed any chance of the city establishing an intermodal connection with the hinterland. With

the rise of the Port of Los Angeles in the 1920s and with the concomitant relocation of West Coast naval operations to San Diego, San Francisco lost its primacy in maritime operations. The end of the &quot;long nineteenth century&quot; did not presage an end to San Francisco&#39;s role in global economies; it would be more fair to say that the recent emphasis on globalization is more accurately a myopic view that fails to account for the city&#39;s long-standing, maritime-based role in international commerce. Far from dealing with a new phenomenon, San Francisco has a long history with world markets. The city served as the central hub of economic activity from Alaska to Tierra del Fuego, and San Franciscobased merchants and shippers were actively engaged in international trade from an early stage. The spreading tentacles of globalization have long been at work in this city, and nowhere is this better observed than in the maritime history of the region in the nineteenth century. A multiethnic, transnational maritime community was largely responsible for the rise of San Francisco to global prominence, and it would be hard to imagine the city developing as it did without its maritime connections. ,!, Dr. Tim Lynch is an Assistant Professor of Maritime History at the California Maritime Academy. Additionally, he serves as editor of H-Maritime, an online listserve dedicated to all matters maritime.