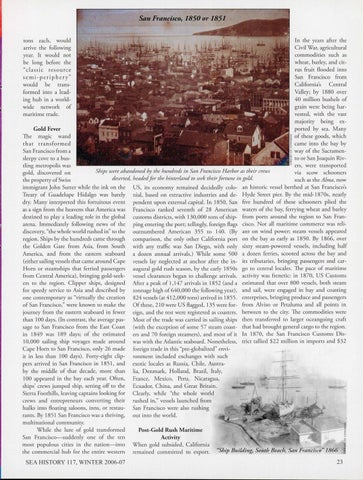 ÂˇSan Francisco, 1850or 1851 . tons each, would arrive the following year. It would not be long before the &quot;classic resource semi-periphery&quot; would be transformed into a leading hub in a worldwide network of maritime trade.

Gold Fever The magic wand that transformed San Francisco from a sleepy cove to a busding metropolis was gold, discovered on the property of Swiss

Ships were abandoned by the hundreds in San Francisco Harbor as their crews deserted, headed for the hinterland to seek their fortune in gold.

immigrant John Sutter while the ink on the Treaty of Guadelupe Hidalgo was barely dry. Many interpreted this fortuitous event as a sign from the heavens that America was destined to play a leading role in the global arena. Immediately following news of the discovery, &quot;the whole world rushed in&quot; to the region. Ships by the hundreds came through the Golden Gate from Asia, from South America, and from the eastern seaboard (either sailing vessels that came around Cape Horn or steamships that ferried passengers from Central America), bringing gold-seekers to the region. Clipper ships, designed for speedy service to Asia and described by one contemporary as &quot;virtually the creation of San Francisco,&quot; were known to make the journey from the eastern seaboard in fewer than 100 days. (In contrast, the average passage to San Francisco from the East Coast in 1849 was 189 days; of the estimated 10,000 sailing ship voyages made around Cape Horn ro San Francisco, only 26 made it in less than 100 days) . Forty-eight clippers arrived in San Francisco in 1851, and by the middle of that decade, more than 100 appeared in the bay each year. Often, ships&#39; crews jumped ship, setting off to the Sierra Foothills, leaving captains looking for crews and entrepreneurs converting their hulks into floating saloons, inns, or restaurants. By 18 51 San Francisco was a thriving, multinational community. While the lure of gold transformed San Francisco-suddenly one of the ten most populous cities in the nation-into the commercial hub for the entire western

US, its economy remained decidedly colonial, based on extractive industries and dependent upon external capital. In 1850, San Francisco ranked seventh of 28 American customs districts, with 130,000 tons of shipping entering the port; tellingly, foreign flags outnumbered American 355 to 140. (By comparison, the only other California port with any traffic was San Diego, with only a dozen annual arrivals.) While some 500 vessels lay neglected at anchor after the inaugural gold rush season, by the early 1850s vessel clearances began to challenge arrivals. After a peak of 1, 147 arrivals in 1852 (and a tonnage high of 640,000 the following year), 824 vessels (at 412,000 tons) arrived in 1855. Of these, 210 were US flagged, 135 were foreign, and the rest were registered as coasters. Most of the trade was carried in sailing ships (with the exception of some 57 steam coasters and 70 foreign steamers), and most of it was with the Atlantic seaboard. Nonetheless, foreign trade in this &quot;pre-globalized&quot; environment included exchanges with such exotic locales as Russia, Chile, Australia, Denmark, Holland, Brazil, Italy, France, Mexico, Peru, Nicaragua, Ecuador, China, and Great Britain. Clearly, while &quot;the whole world rushed in,&quot; vessels launched from San Francisco were also rushing out into the world.

In the years after the Civil War, agricultural commodities such as wheat, barley, and citrus fruit flooded into San Francisco from California&#39;s Central Valley; by 1880 over 40 million bushels of grain were being harvested, with the vast majority being exported by sea. Many of these goods, which came into the bay by way of the Sacramento or San Joaquin Rivers, were transported via scow schooners such as the Alma, now

an historic vessel berthed at San Francisco&#39;s Hyde Street pier. By the mid- l 870s, nearly five hundred of these schooners plied the waters of the bay, ferrying wheat and barley from pons aro und the region to San Francisco. Not all maritime commerce was reliant on wind power; steam vessels appeared on the bay as early as 1850. By 1866, over sixty steam-powered vessels, including half a dozen ferries, scooted across the bay and its tributaries, bringing passengers and cargo to central locales. The pace of maritime activity was frenetic: in 1870, US Customs estimated that over 800 vessels, both steam and sail, were engaged in bay and coasting enterprises, bringing produce and passengers from Alviso or Petaluma and all points in between to the city. The commodities were then transferred to larger oceangoing craft that had brought general cargo to the region. In 1870, the San Francisco Customs Distrier tallied $22 million in imporrs and $32