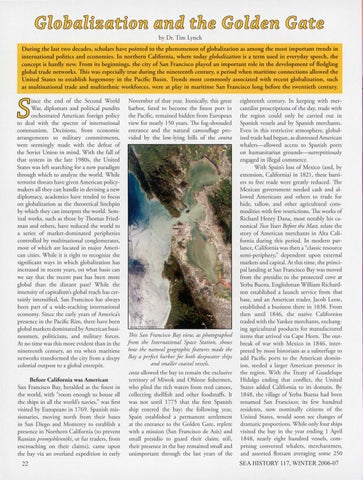 by Dr. Tim Lynch During the last two decades, scholars have pointed to the phenomenon of globalization as among the most important trends in international politics and economies. In northern California, where today globalization is a term used in everyday speech, the concept is hardly new. From its beginnings, the city of San Francisco played an important role in the development of fledgling global trade networks. This was especially true during the nineteenth century, a period when maritime connections allowed the United States to establish hegemony in the Pacific Basin. Trends most commonly associated with recent globalization, such as multinational trade and multiethnic workforces, were at play in maritime San Francisco long before the twentieth century. ince the end of the Second World War, diplomats and political pundits orchestrated American foreign policy to deal with the spectre of international communism. Decisions, from economic arrangements to military commitments, were seemingly made with the defeat of the Soviet Union in mind. With the fall of rhar system in the late 1980s, rhe United Stares was lefr searching for a new paradigm through which to analyze the world. While terrorist threats have given American policymakers all they can handle in devising a new diplomacy, academics have tended to focus on globalization as rhe theoretical linchpin by which they can interpret the world. Seminal works, such as those by Thomas Friedman and others, have reduced rhe world to a series of marker-dominated peripheries controlled by multinational conglomerates, most of which are located in major American cities. While it is right to recognize the significant ways in which globalization has increased in recent years, on what basis can we say that the recent past has been more global than rhe distant past? While the intensity of capitalism&#39;s global reach has certainly intensified, San Francisco has always been part of a wide-reaching international economy. Since the early years of America&#39;s presence in the Pacific Rim, there have been global markers dominated by American businessmen, politicians, and military forces. Ar no rime was this more evident than in the nineteenth century, an era when maritime networks transformed the city from a sleepy colonial outpost to a global entrepor.

This San Francisco Bay view, as photographed from the International Space Station, shows how the natural geographic features made the Bay a perfect harbor for both deepwater ships and smaller coastal vessels.

Before California was American San Francisco Bay, heralded as rhe finest in the world, with &quot;room enough to house all the ships in all the world&#39;s navies,&quot; was first visited by Europeans in 1769. Spanish missionaries, moving north from their bases in San Di ego and Monterey to establish a presence in Northern California (to prevent Russian promyshlenniki, or fur traders, from encroaching on their claims), came upon the bay via an overland expedition in early

costa allowed rhe bay to remain rhe exclusive territory of Miwok and Ohlone fishermen, who plied the rich waters from reed canoes, collecting shellfish and other foodstuffs. It was not until 1775 that the first Spanish ship entered the bay; the following year, Spain established a permanent settlement at the entrance to rhe Golden Gare, replete with a mission (San Francisco de A.sis) and small presidia to guard their claim; still, their presence in the bay remain ed small and unimportant through the last years of the

November of rhar year. Ironically, this great harbor, fared to become the finest port in the Pacific, remained hidden from European view for nearly 150 years. Th e fog-shrouded entrance and the natural camouflage provided by the low-lying hills of the contra

eighteenth century. In keeping with mercantilisr proscriptions of the day, trade with the region could only be carried our in Spanish vessels and by Spanish merchants . Even in this restrictive atmosphere, globalized trade had begun, as distressed American whalers-allowed access to Spanish ports on humanitarian grounds-surreptitiously engaged in illegal commerce. With Spain&#39;s loss of Mexico (and, by extension, California) in 1821, these barriers to free trade were greatly reduced. The Mexican government needed cash and allowed Americans and others to trade for hide, tallow, and other agricultural commodities with few restrictions. The works of Richard Henry Dana, most notably his canonical Two Years Before the Mast, relate the story of American merchants in Alta California during this period. In modern parlance, California was then a &quot;classic resource semi-periphery,&quot; dependent upon external markets and capital. At this rime, the principal landing at San Francisco Bay was moved from the presidia to the protected cove at Yerba Buena. Englishman William Richardson established a launch service from that base, and an American trader, Jacob Leese, established a business there in 1838. From then until 1846, the native Californios traded with the Yankee merchants, exchanging agriculrural products for manufactured items rhar arrived via Cape Horn. The outbreak of war with Mexico in 1846, interpreted by most historians as a subterfuge to add Pacific ports to the American dominion, seeded a larger American presence in the region. With the Treaty of Guadelupe Hidalgo ending that conflict, the United Stares added California to its domain. By 1848, the village of Yerba Buena had been renamed San Francisco; its few hundred residents, now nominally citizens of the United Stares, would soon see changes of dramatic proportions. While only four ships visited the bay in rhe year ending 1 April 1848, nearly eight hundred vessels, comprising converted whalers, merchantmen, and assorted flotsam averaging some 250